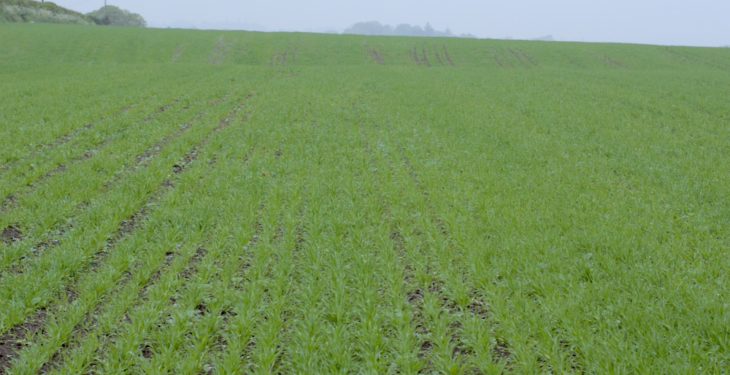 In the fourth part of the Crops Watch series, a collaborative crop monitoring programme between AgriLand, TerraChem and Nolan Farming, we assess the progress of spring barley and fodder beet crops.

Last weekend’s rain has given crops a much needed boost and here TerraChem’s John Mulhare and Nolan Farming’s Kevin Nolan provide an update on the crops.

“Pig slurry was incorporated with a disc immediately after spreading. This application of slurry supplied the crop with 71kg of nitrogen/ha, 27kg or phosphorous/ha and 88kg of potassium/ha.

As it was disced into the soil within minutes of spreading, most of the nitrogen is expected to be available.

“Granular nitrogen was also applied to bring the total nitrogen application up to 175kg/ha – having made allowances for yields expectations,” he said.

“We are big into using organic manure and that includes everything from sludge to pig manure.

“There is a local piggery here so we decided to go with 3,000 gallons/ac of pig slurry. The pig slurry is full of life. You are not just getting the value of the fertiliser, but you are getting an instant kick,” he said.

Mulhare also said that the moisture-retaining properties of the min-till sowing technique, together with the organic fertiliser application, has stood to this particular crop of spring barley.

“The establishment seen in this crop looks significantly better than other spring barley crops sown at a similar time around the country,” he said.

The TerraChem agronomist also touched on the spraying programme, as the first application is due now.

“Not all of the fields are deficient in trace elements. 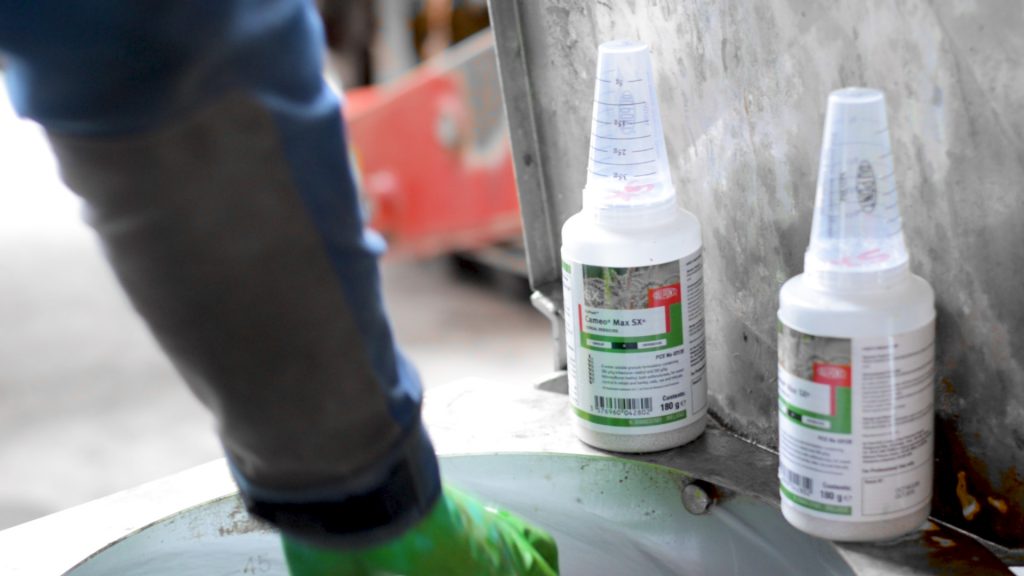 “However, the high pH seen in many of the parcels combined with the approach of driving crops as hard as possible to maximise yield are the main reasons why all of the cereals receive a blanket application of a multi-nutrient product – such as Cereal ALOY.

“Leaf testing is used to keep an eye on how the nutrient levels are sitting internally in the plant.”

Mulhare added that some crops are topped up with straight manganese. This is based on historical information and the tendency of some soils to be more deficient in this particular trace element.

“Magnesium is also applied routinely to crops, at varying levels, depending on location.

“When it is being used as a top-up to drive on chlorophyll levels and grain fill, the normal application rate is 1.0L/ha of SulfaMag ALOY.” 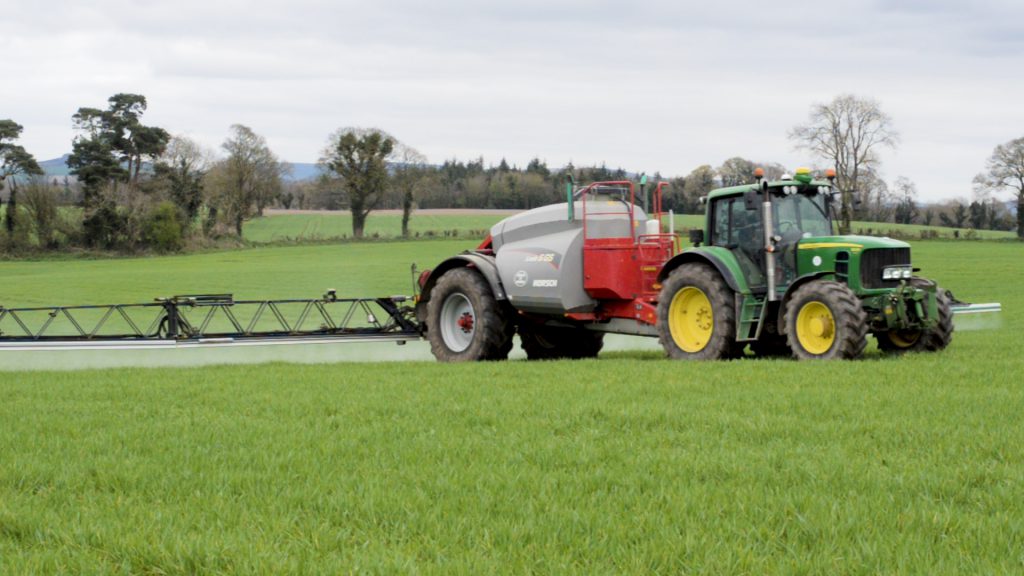 Within the next five to six days, Mulhare said, the crop will receive its fungicide application of Proline (0.6L/ha) and Treoris (1.0L/ha).

The Talius is being included with the herbicide as mildew is already evident. Delaying the application of a preventative mildewicide will only allow the problem to develop further within the lower leaves.

“Depending on how growth responds to the welcome rainfall, we may need to apply 0.2L/ha of Moddus at growth stage 3 to reduce the risk of lodging,” he said.

Mulhare also gave an update on a crop of fodder beet grown on his own farm. The crop is sown in a rotation of beet, winter wheat (for seed) and winter barely.

“The phosphorous and potassium was applied last autumn to the barley stubble in the form of farm-yard manure and pig slurry.

To add further organic matter and to catch the nutrients over the winter months, he said, forage rape was sown by means of eco-tilling.

This crop was grazed in the spring, allowed to regrow, and then burnt off with glyphosate.

Artificial fertiliser applications will be limited to 125kg/ha of urea. This fertiliser was applied to the ploughed ground and tilled in.

“The beet was sown on the flat and rolled to conserve moisture. This also helped to improve the seed-to-soil contact, which is necessary to maximise establishment,” he said.

The fodder beet crop received its first application of herbicide four days ago – four weeks after being sown, Mulhare confirmed.

“The standard approach is to use a split T1 application to reduce stress on the crop.

“This is even more important this season due to the recent drought stress, with only 3mm of rain having fallen since the crop was sown.

Every effort is made to maximise growth at the early stages of development, as yields can only be maximised through the production of an even, uniform crop.

“The approach on this farm has been the same for a number of years in that the first split is applied at 50-60% of each of these rates. 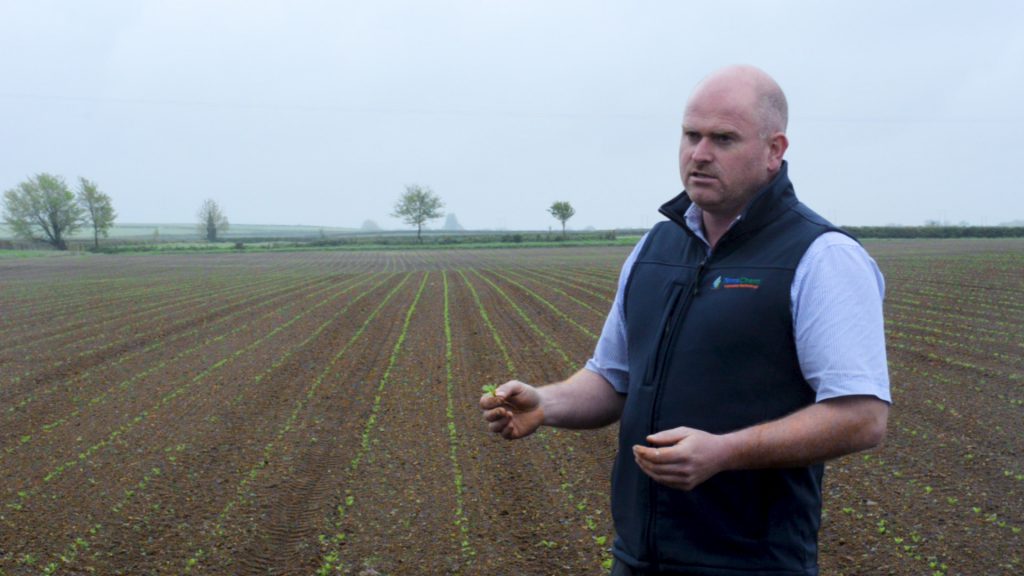 The TerraChem agronomist added that 0.5L/ha of Super Rapeeze vegetable oil is applied at each application.

“Timing is vital for this split-spray approach as a delay in getting on the second application means that 100% rates must be used the second time around.

This undoes the cost saving and fails to deliver any reduction in ‘chemical stress’ on the crop.

“Every herbicide application has the effect of slowing down the growth of the beet crop, which is why this split T1 approach is always taken,” he added.

To the same end, he said, only Bental MAX Pro is used throughout the spray programme, as it is known to be easier on beet than other combinations of phenmedipham\desmedipham\ethofumesate. 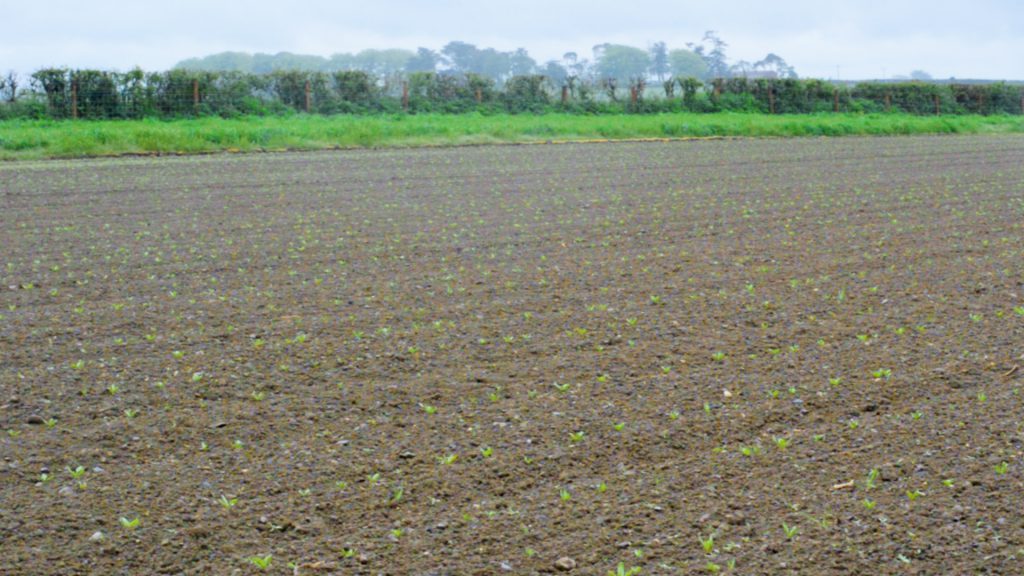 Mulhare also discussed the final herbicide application, which he said is typically applied 10 to 14 days after the second T1 split.

“Adding Venzar Flowable to the final spray has proven useful as it gives an extra kick on any charlock or knotgrass, which may not have been fully controlled by the first application.

Around the six-to-eight true leaf stage, he added, the crop will also receive a dedicated nutrient spray of manganese ALOY, SulfaMag ALOY, Bortrac 150 and Uplift.

Over the season the crop will receive three applications of full-rate Boron to minimise any risk of sub-clinical crown rot and increase sugar content to maximise the feed quality,” he said. 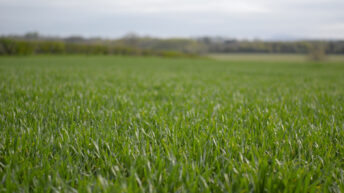