Krone launched its latest development in straw management technology in Hungary this week – the Krone Premos 5000.

The German-based machinery manufacturer showcased the prototype to over 130 international journalists at a joint Krone and Lemken press camp in Eastern Europe on Wednesday.

According to Krone’s Niklow Beindorf, the new concept in straw management has the potential to become a game changer in the way farmers deal with their straw.

The Krone Head of Marketing said that the new concept, which converts straw into a pelleted form in the field, can reduce some of the handling associated with round or square bales.

He said that straw management on farms can be complicated, especially when farmers depend on other farmers to clear the field in time for the next crop.

Beindorf also added that the end product (the straw pellets) is suitable for a wide range of uses including energy and animal feed and bedding.

The pellets are dust free and can be used for horse bedding. Burning the pellets for energy is also possible. 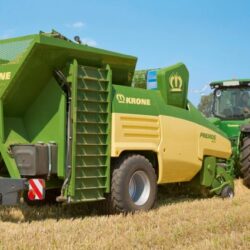 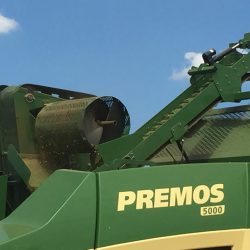 Pellets being collected in the Krone Premos 5000 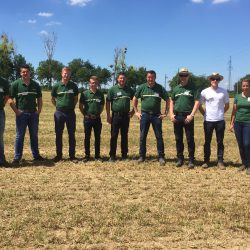 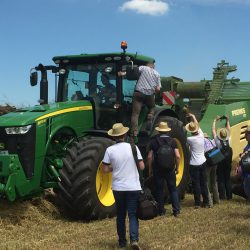 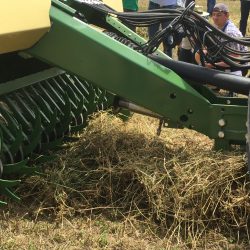 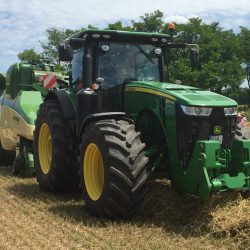 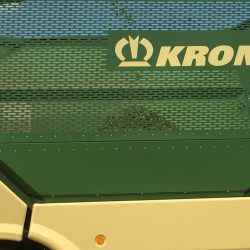 However, Kai Lupping, the man behind the concept said there are still limitations to the design as it is still in its early stages of development.

He said that the working prototype which was on show has the capacity to convert 3-5t of straw into pellets in one hour, which is considerably slower than normal practice of bailing used on most farms.

Lupping also said that the machine is  power demanding, as it requires at least 400 horsepower tractor to work effectively.

But he added that the design, which has the potential to work both in the field and in a stationary position, uses considerably less energy than some of the conventional straw pelleting operations used presently.

Straw can be moved over 40km when being processed into pellets in the plants currently used, he said, but it only moves a total of 4m in the new Premos 5000.

Will Krone’s latest innovation make it to Ireland?

The Premos 5000 has great potential in Ireland, according to Farmhand’s Stephen Scrivener.

The Marketing Manager with Farmhand – the exclusive importer of Krone Machinery in Ireland said that the company will move to import the new machine when it becomes available on the market.

Farmhand has been long associated with Krone, as it has been the exclusive importer for the German machinery brand in Ireland for the past 57 years.

“The machine is very exciting and it can bring pellets from the field to the furnace in a matter of minutes,” Scrivener said.

Krone ZX Wagon - possibly the most powerful wagon on the planet