Losing sheds during Storm Ophelia prompted a Co. Cork farmer to send a second lot of her stock to a UK animal sanctuary earlier than expected.

Jill Smith, who farms near Carrigaline, sent 30 cows and seven calves to Hillside Animal Sanctuary in Norfolk in September.

Losing the sheds caused her to send a second group of 15 cows and 11 calves to the sanctuary ahead of schedule. The last lot is due to travel to the UK sanctuary in the summer. “I am keeping a few of my rare breeds and a few pet ones,” said Jill. “I’m not farming like I was. I’m now milking once a day, and hoping to get my sheds repaired at the end of January.”

Jill, who is scaling back on her farming work due to health issues, expressed delight that the UK charity could take the second group earlier than expected and ahead of the icy spell.

The herd – which includes Shorthorn, Jersey, Friesian and Droimeann cows – benefited from a fundraising campaign to rehome them. It was started by Charlie’s Equine Rescue, with musician, Sharon Shannon, supporting the campaign.

Jill left school at 16 to take over the running of the farm after her father, a contractor, fell into ill health. She was forced to make provision for her herd when she broke her ankle and infection set in. “I was in hospital for nearly a month, and only for my neighbours and friends, the farm wouldn’t have been able to keep going,” she said. 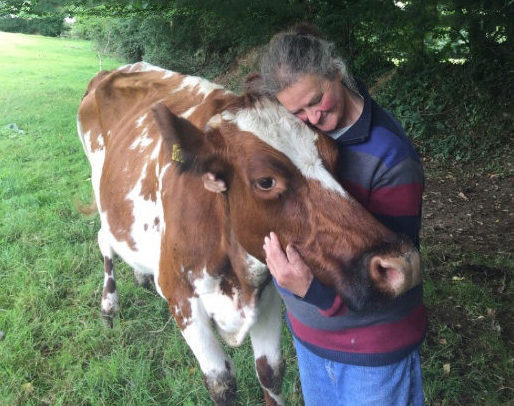 She got in touch with the Norfolk sanctuary after seeing a BBC Countryfile slot on a vegetarian farmer who sent his suckler herd to Hillside. The crowdfunding campaign covered the cost of transport.

Jill said she always had a problem sending animals to the factory. “I dreaded it for months beforehand and felt terrible for months afterwards.

Farming is a business, but it is difficult. Some farmers were exceptionally nice about my decision, saying they would love to be able to do the same, and others were quite distant about it, and didn’t like to talk about it.

“I have wonderful peace of mind now. The lorry driver kept in touch with me during the long journey and assured me that they wouldn’t move an inch as they all know each other, and I know they have their own pecking order.”