30 cows and seven calves from a dairy farm near Carrigaline, Co. Cork, recently arrived at an animal sanctuary in Norfolk in the UK.

Part of a herd of 70, owned by Jill Smith who is scaling back on her farm, they benefited from a fundraising campaign to rehome them at Hillside Animal Sanctuary. The remainder of the cows and approximately 16 sheep, will follow shortly.

The herd – which includes: Shorthorns; Jerseys; Friesians; and Droimeann cows – was saved from the abbatoir after a crowdfunding campaign was started by Charlie’s Equine Rescue in Waterford. Musician Sharon Shannon also rowed in behind the campaign.

The initial target of €6,500 was surpassed with supporters topping the €9,000 mark in under a month. It is understood that the surplus will be given to the sanctuary to help with the costs of keeping the herd. 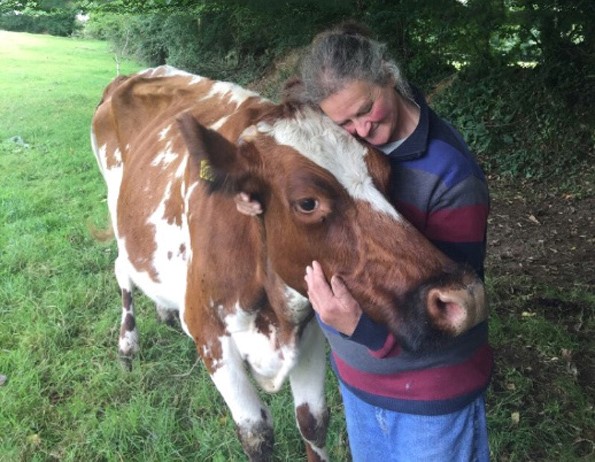 Smith left school at the age of 16 to take over the running of the farm when her father, who was a contractor, fell into bad health. “I had always loved farming and was very involved in the farm, and other people were very good to me. I expanded the cattle which had previously only been a sideline, and we always had eight or 10 sheep.”

She was forced to think about the future care of her animals when she broke her ankle and infection set in. “I was in hospital for nearly a month, and only for my neighbours and friends, the farm wouldn’t have been able to keep going,” she said.

“Last winter, I realised that if anything happened to me, the animals would suffer. You can’t be dependent on other people all the time. I thought it was time to pull back, at the age of 70.

“I was hoping that an Irish animal rescue would be able to rehome the stock, but sadly none of them are big enough to be able to help, and there is a shortage of volunteers. I could have rehomed a few here and there, but I wanted them all to go together.”

She got in touch with the Norfolk sanctuary after seeing a BBC Countryfile slot on a vegetarian farmer who sent his suckler herd to Hillside. The sanctuary said it would take in her herd, but that the transport costs would have to be met.

After contact was made, following a recommendation from a friend, with Charlie’s Equine Rescue, a crowdfunding campaign was launched.

“I thought I would have to send some of the cows to the abbatoir to finance sending the rest to the sanctuary in the UK, but Charlie’s Equine Rescue has a ‘no slaughter’ policy and the fundraising got underway,” said Smith.

“It was great because it would have been very tough to find the money. As a result of the response to the fundraising, the pressure was off.”

The local Church of Ireland Rector, Rev. Elaine Murray, visited the farm and said prayers before the animals departed for the UK. Smith had names for all her stock and saw her Droimeann cows as pets, recalling how plentiful they were when she was a child. She said she is thrilled with the outcome for all her stock.

I couldn’t believe that so much money was raised to save my cows. I had names for all of them – a lot of them were original pedigree stock. People often comment on how happy they looked, lying down in the fields.

“I will continue to farm in a small way, and have held on to a small number of stock. I couldn’t get up in the morning and see nothing in the yard.”

Smith was surprised to get phone calls offering to buy the second lot of stock. “It has been arranged for them to go to the sanctuary – they will have the best life there,” she said.

Animal welfare is a big concern for her. “I always had a problem sending cattle to the factory – I put it off as much as I could. I had to be practical, but it was never easy,” Smith said. Current farming practices, she said, are sometimes seeing a conveyor belt approach. “In some cases, the animals have no life.”

While she was sorry to see her cherished herd go, she said she is delighted they have been saved from the abbatoir. “It is a lovely ending. I’m so happy for the cows.”