Reneghan beat Cavan man James Speares in an overall tally of 1,111 votes to 787.

Both candidates have been in full swing on the campaign trail in recent weeks with hustings in each of the counties of the IFA constituency.

In other election news, Patrick Kent was re-elected as the president of the Irish Cattle and Sheep Farmers’ Association (ICSA) last night (Thursday, December 14) after the election campaign came to a conclusion in the Midlands Park Hotel in Portlaoise, Co. Laois.

Having held the role for the last four years, the Co. Wexford man will now lead the organisation for a third term of two years.

He beat off competition from the association’s current rural development chairman, Seamus Sherlock – who hails from Co. Limerick.

Both candidates went head-to-head in a vote of 101 delegates from across the country; the results of which decided the winner. In a very close contest which went right down to the wire, Kent received 52 votes to Sherlock’s 49 – a winning margin of just three votes. 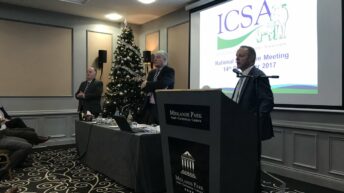