Farm fined in excess of €110,000 after man dies in ‘easily’ preventable accident

A fine of in excess of £96,800 (€110,100) has been handed down to the owners of a farm in the UK, after a man was electrocuted and died in an accident that “could easily have been prevented”.

He was electrocuted when the arm of a loader crane hit overhead power lines (OHPLs), according to a statement from the Health and Safety Executive (HSE).

On Wednesday, December 13, Liverpool Crown Court heard that Evans and his friend had been collecting scrap metal from the farm by prior arrangement when the incident took place, the HSE added.

An investigation by the HSE found that the scrap metal had been left under live 11kV OHPLs.

According to the HSE, Evans and his friend had driven the loader crane over to where the scrap was, parked up under the OHPLs and exited the vehicle.

Whilst operating the crane to pick up and move the scrap metal into the back of the loader crane, the grab touched the OHPLs and got tangled in them, it added.

Evans was electrocuted and subsequently died as a result of his injuries. His friend also received an electric shock whilst trying to rescue him, the statement from the HSE explained.

Speaking after the hearing, HSE inspector Jane Carroll said: “This tragic incident could easily have been prevented if the farm partnership had acted to identify and manage the risks involved with overhead power lines on their land, and to put a safe system of work in place.

“The dangers associated with OHPLs are well known and a wealth of advice and guidance is freely available from the HSE and other energy suppliers. Duty holders must make sure they properly assess and apply effective control measures to minimise the risk from OHPLs,” Carroll concluded. 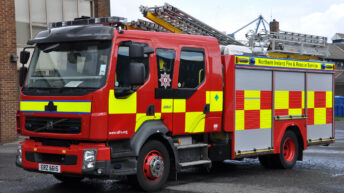