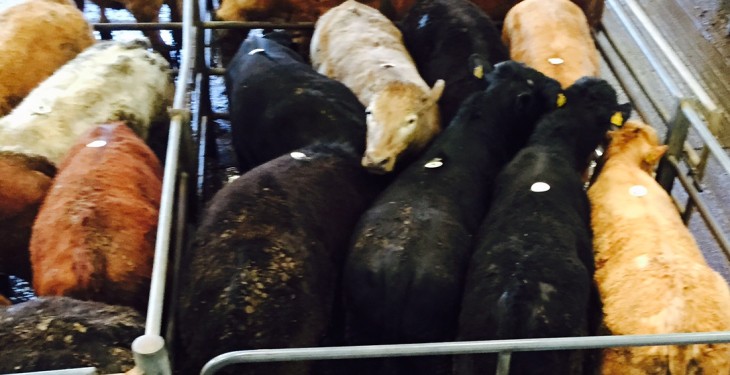 Cattle prices are holding steady in the country’s marts despite the fall in beef prices, however plainer lots have slipped slightly, while Northern Irish buyers have been seen to a great extent around the ring last week.

Balla Mart had a smaller sale on Saturday with over 700 cattle on offer. According to Mart Manager Michael Murphy there was strong demand for heavy steers on the back of midlands and Northern buyers.

Kilkenny Mart had a bigger entry of cattle on Thursday with 790 cattle going through the ring. According to Auctioneer George Candler plainer lots have fallen by €10-25/head, with the greatest fall happening with Friesian type steers.

However, despite the reduction in the value of plainer stock the trade for quality steers and heifers remained strong, in part due to reduced numbers of these lots.

Beef heifers were in short supply in the Kilkenny venue and this was reflected in the price with lots selling from €1.90-2.48/kg or €500-800 over, said Candler.

Macroom Mart had a bigger entry of cattle on Saturday and according to Mart Manager John O’Mahony the trade remained strong across all lots.

Castlerea Mart had 750 cattle on offer on Thursday and according to Mart Manager Gus Egan prices held firm for most categories of stock.

Egan added that there were increased numbers of weanlings coming on offer with the tops of these lots selling for €2.72-3.52/kg and €2.64-3.88/kg for the bulls and heifers respectively.

Quality continental cattle remained in strong demand, he added, with forward store and beef steers selling from €2.12-2.87/kg, while the hammer falling on their female counterparts at €2.42-2.85/kg.

Breeding stock and dry cows recorded good clearances, said Egan. There was a selection of cows with calves at foot on offer and these lots made €1,400-1,750/unit. The hammer fell on the cull cow lots at €1.65-1.87/kg.