Calf weighing over 90kg born on dairy farm in Scotland

A rather large arrival was delivered on a farm in south-west Scotland last week when a cow went into labour on Meinside Farm.

Speaking to AgriLand, one of the farm’s staff – Thomas Woodman – explained that the Holstein cow in question was overdue “a short while” to a Simmental bull.

Thomas explained that when the cow went into labour, the farm’s staff soon realised the calf was in breech position and a cesarean may be needed to ensure the safe delivery of the much-anticipated new arrival. 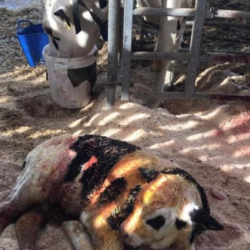 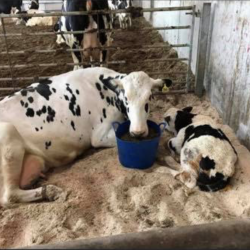 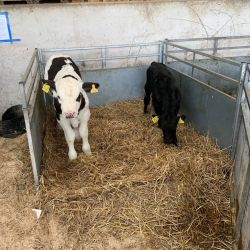 He noted that the local vet was called out to the farm and confirmed that a cesarean would be needed and began operating without delay.

We didn’t know the calf was actually as big as it was until we got it out. We knew it was a big calf but we didn’t think it was that big.

The cow – with the assistance of the vet – finally delivered the calf, weighing in at just over 90kg and both cow and calf are doing fine, according to Thomas.

Meanwhile, in Ireland, the number of dairy-bred calves born – so far this year – is up by over 62,300 head or by 9% when compared to the same period in 2019, figures from the Irish Cattle Breeding Federation (ICBF) indicate.

Beef calf registrations are also running marginally ahead of last year’s levels – up 13,124 head compared to 2019.