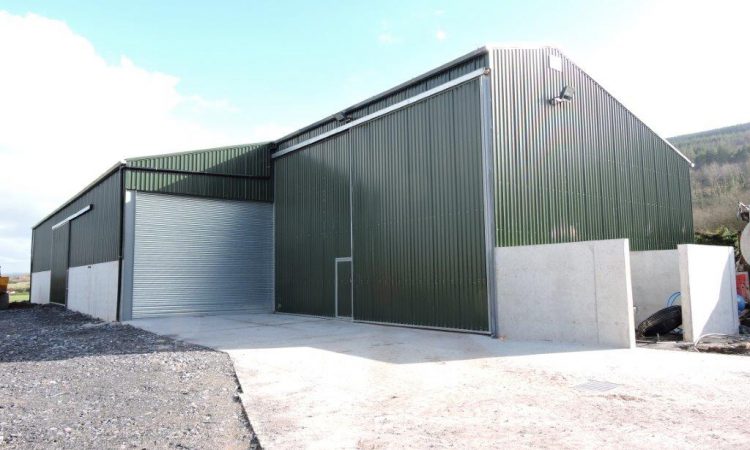 In this week’s buildings focus, AgriLand travelled to Tinnakilly, Co. Tipperary, where Michael Lawrence installed a shed with a capacity for up to 200 calves.

Since the abolishment of milk quotas in 2015, the farm has expanded immensely, with Michael building a cubicle shed in 2013 for his 270 dairy cows; he also installed a 35-unit herringbone parlour.

As cow numbers increased, the old calf shed was under pressure to house these extra calves. Therefore, there was a need for improved calf-rearing facilities.

Telling his story, Michael said: “The majority of the cows calve within a six-week period, so you can imagine how quick the shed fills up with calves.

“It was necessary to build a shed that can hold a large number of calves and make life easier for me at calving time.”

Michael carries over 500 head of stock on the farm, including: 270 cows; 300 bullocks and heifers; five pedigree Angus cows; and a pedigree Angus bull.

“I don’t sell any of my calves. Last year, I had 110 heifers and I bred 70 of them. I keep the bull calves and the heifers I don’t intend on breeding and finish them between 20 and 24 months-of-age.

“I have been operating a closed herd for the past eight years. Before this, I was buying 300 head of continental cattle every year and bringing them to slaughter,” he added.

Michael finished all of his calves up until last year; however, the decision was then made to market some of the animals at the mart.

“It is disappointing the way the beef trade is at the moment. Last year was the first time I went to sell a few calves in the mart, but it was extremely hard to sell them at the right price.

I’m not sure what I will do with my calves next spring. It is something I am going to have to think hard about.

“No matter what I do with them – whether it be selling them in the mart or finishing them – I am still not going to make any money from them by the looks of it.”

The floors are sloped in the pens to a channel, that will catch any run-off and keep the straw bed dry. These channels are piped to a tank beside the shed. 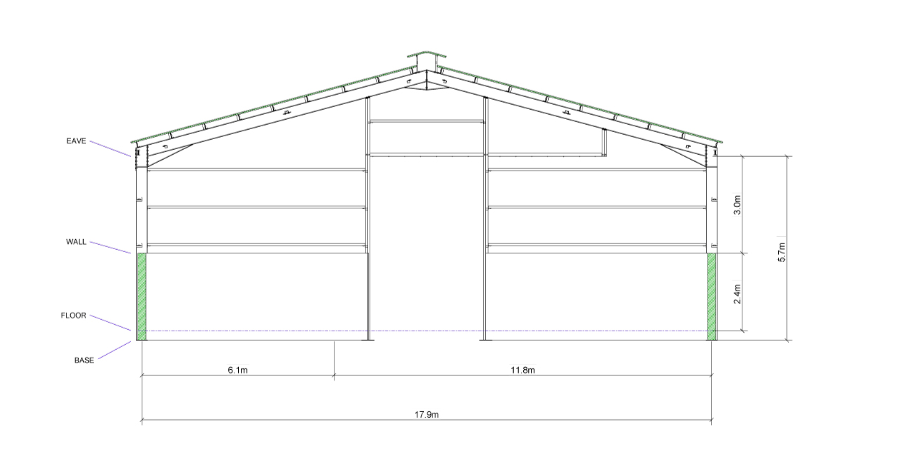 However, Michael has the shed set up that there are three small pens – for the young calves – that can fit up to 10 animals. These pens are 3m long and 3.55m wide.

“The shed is designed in a way that we can take the gates out and make the pens bigger. This allows two pens to become one if needs be.

“Furthermore, it is handy when we are cleaning out the pens every two weeks at spring time.”

One element of the design Michael wanted from day one was a high roof with plenty of ventilation. The shed has vent sheeting over the 2.4m walls.

“Last spring, we had very few cases of scour or calves with chills. There was no smell in the shed and more importantly no draughts.

The time of the ‘Beast from the East’ we had over 240 calves in the shed, with the bigger pens housing up to 30 calves each.

“Therefore, it was vital that the shed had good airflow going through it. I never have to open the door to let air in.”

The calf pen is divided into two sections. The front part consists of a concrete floor and the back part of the pen is covered with plastic pallets that act as slats.

The plastic pallets are covered with straw when the calves are lying on them. The slats keep the straw dry as the effluent drains away underneath them and flows down the channel in to the underground tank.

A timber frame is placed between the plastic pallets and the concrete floor at the front of the pen to prevent the calves from dragging the straw onto the concrete.

“The pallets are easy to clean and the calves are comfortable and warm on them. Before this, we were using timber pallets; however, we were changing them every year as they kept breaking.”

Feed racks are installed in each pen and filled with straw on a daily basis. There are also blue feeding troughs at the back of each pen, and during the spring, calves have access to ad-lib concentrates.

“I prefer to give the calves straw rather than hay; I find that the straw encourages the calves to eat the concentrates more.”

There are water troughs installed in each pen, with freshwater coming from a tank directly outside the shed.

Furthermore, there are two sliding doors located at the side and back of the shed. These doors allow Michael to access two separate paddocks when the calves are ready to be let out to grass at eight weeks-of-age.

There is a workshop and storage area at the front of the build where Michael and his brother fix machinery and store fertiliser.

“It was always in my head to have the garage at the front of the shed. It is a handy space for me to store the fertiliser and any feed I might buy for the store cattle.”

A 2.4m wall divides the workshop from the calf shed, with a 3.71m passageway connecting the two areas. 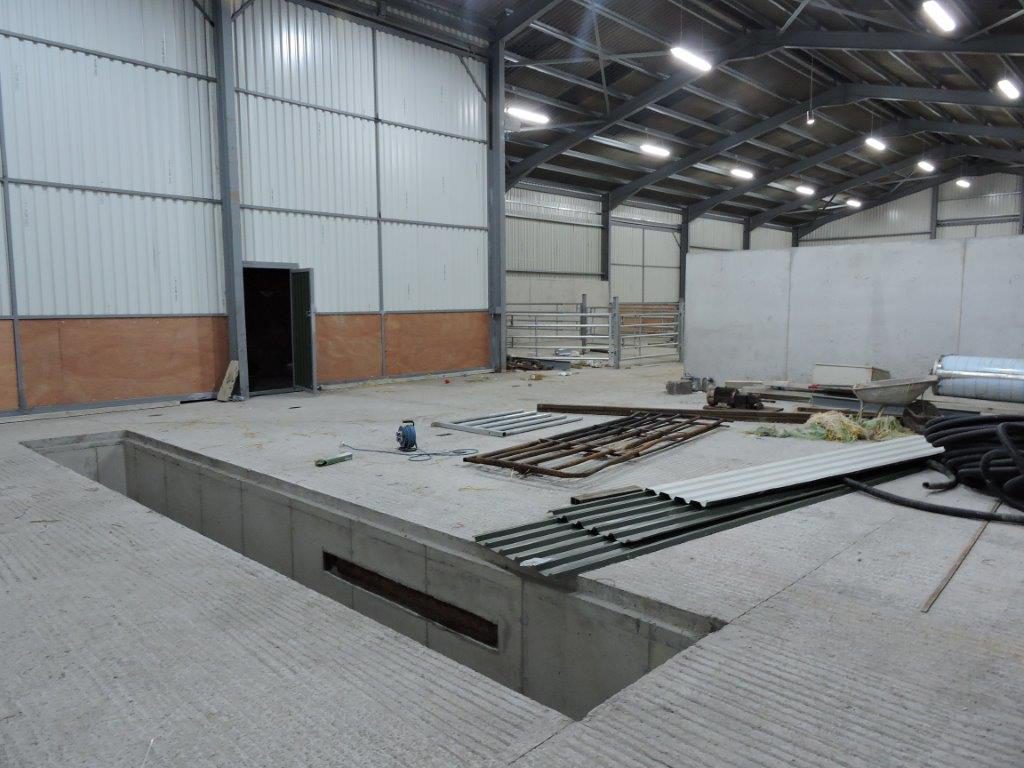 After deciding to build the shed on the same site as the previous calf shed, Michael contacted Gleeson Steel and Engineering who designed and erected the shed.

The build began in November 2016 and was completed the following February just in time for calving.

The cost of installing the calf unit itself excluding the workshop at the front was €90,000 including VAT. 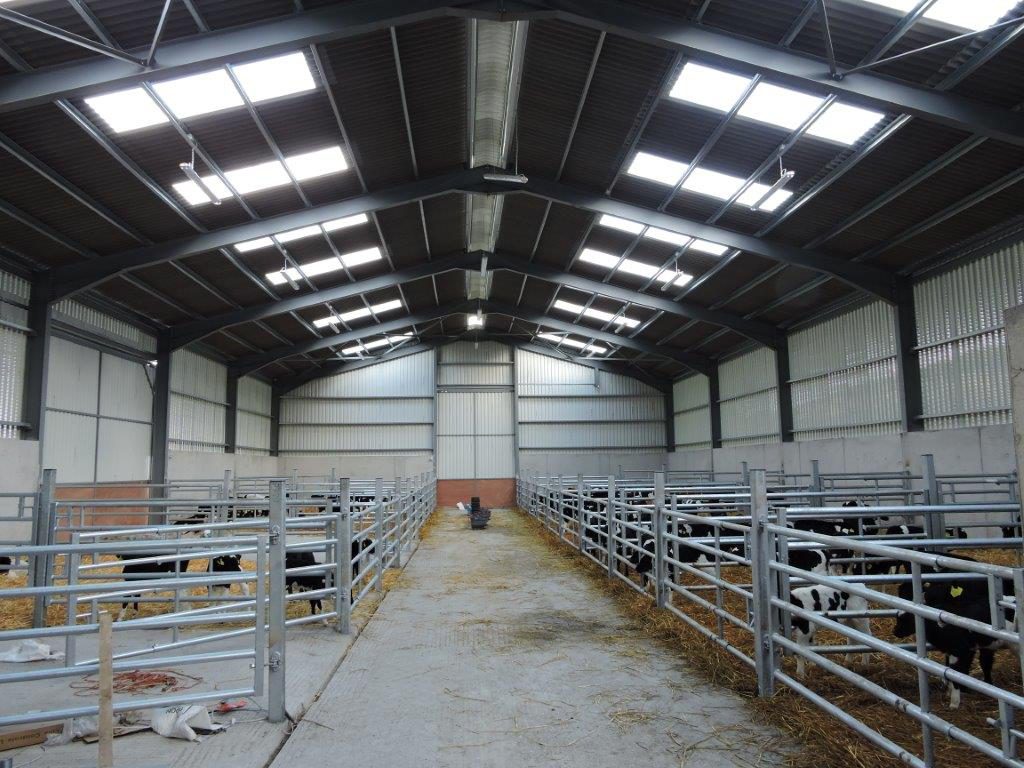 Commenting on the build, Michael said: “I am delighted with how the shed turned out. I needed a shed that would allow me to carry out my work efficiently, with regard to cleaning it out which only takes four-to-five hours.

“Moreover, it only takes me 30 minutes to feed the calves and if I want to move calves between pens, the gates are interchangeable, which makes it a lot easier to do,” Michael concluded. 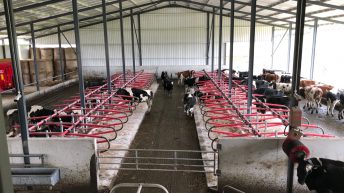