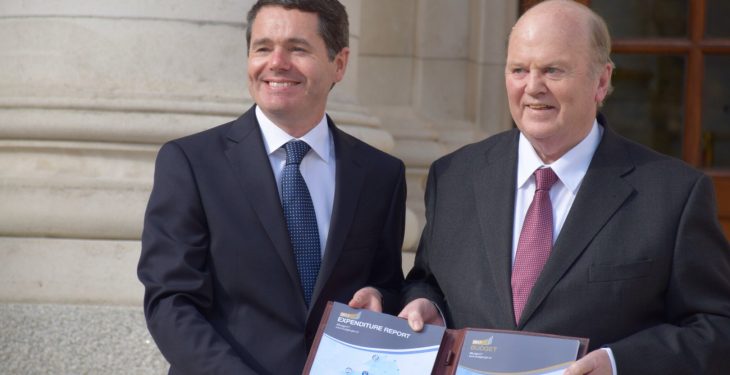 Low-cost loans, a €25m sheep scheme and an increased allocation under the GLAS scheme are on the way for farmers under new measures announced under Budget 2017 today.

The Minister for Finance, Michael Noonan, announced that a new low-cost flexible loan fund will become available for farmers, worth €150m, to improve farmers’ cash flow.

More details of this loan fund are to be announced later today by the Minister for Agriculture, Michael Creed.

Under the Rural Development Scheme, there will be increased funding of €107m, which includes €25m for a new animal welfare sheep scheme. Some 34,000 farmers are expected to participate in the scheme.

The GLAS allocation is to increase to €211m, with an expected total number of participants of 50,000 in next year.

Budget 2017 sees investment in the Department of Agriculture increase by €119m, which is to allow for continued investment in Food Wise 2020.

The farmer’s flat-rate addition will be increased from 5.2% to 5.4% with effect from January 1 2017. The flat-rate scheme compensates unregistered farmers for VAT incurred on their farming inputs.

The flat-rate addition is reviewed annually in accordance with the EU VAT Directive and the increase to 5.4% in 2017 continues to achieve full compensation for farmers, according to Budget 2017.

Under Budget 2017, the scheme of accelerated capital allowances for energy efficient equipment is being made available to sole traders and non-corporates.

The Income Averaging regime allows a farmer’s taxable profit to be averaged out over a five-year period.

This is being amended to allow an “opt out” in a single year of unexpectedly poor income, which may be availed of for the 2016 tax year.

“I am allowing a farmer facing an exceptionally poor year to “step out” of income averaging and, instead, pay only the tax due on a current year basis with any deferred tax liability becoming payable over subsequent years.

“This facility will be available immediately and should provide cash-flow assistance this year,” Minister Noonan said.

In Budget 2013, the Minister said that he introduced farm restructuring relief to run to the end of 2015.

“In Budget 2015, I extended the relevant period to the end of this year and today I am extending it to the end of 2019. The terms of the relief are unchanged.”

From January 2017, a reduced Capital Gains Tax (CGT) rate of 10% under the Entrepreneur Relief Rate will apply to the disposal in whole or in part of a business up to an overall limit of €1m in qualifying chargeable gains, the Minister said.

Under the Raised Bog Restoration Scheme, payments to relevant owners and rights holders will be exempt from Capital Gains Tax.

Farm Assist is also to be increased and 500 new places are to become available under the Rural Social Scheme.

Other measures under the Budget include €15m to progress the roll-out of the National Broadband Plan to provide high-speed broadband to rural Ireland and a €44m package for flood relief schemes.

Under Budget 2017, it was also announced that each of the three lower Universal Social Charge (USC) rates are to reduce by 0.5%:

The ceiling on the 2.5% rate is also to be lifted slightly under the Budget.