The Irish beef industry is dependent on exports to stay afloat. This comes as only 10% of all beef cattle slaughtered in Ireland are consumed domestically; the remaining 90% are exported.

Just under 50% of all beef exported from Ireland in 2016 was destined for the UK, 40% went to the rest of Europe and the remainder (approximately 10%) was shipped to non-European markets.

Speaking at Tuesday’s National Beef Conference, Teagasc’s Dr. Kevin Hanrahan said approximately 250,000t of Irish beef was exported to the UK last year. 93,000t was shipped in the form of chilled, boneless beef – valued at over €600 million or €643/100kg. 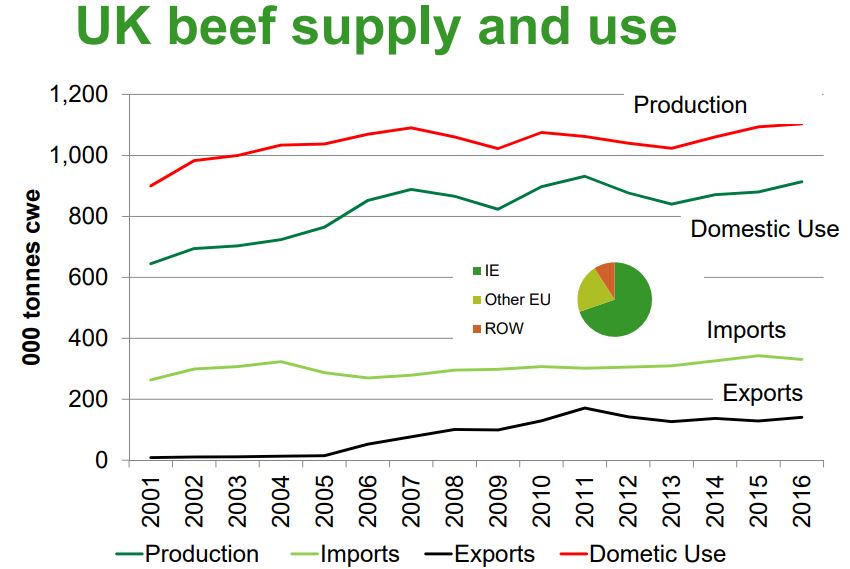 The head of the Teagasc Rural Economy and Development Programme gave farmers a run down of what might happen if the UK exits the common market and is subjected to World Trade Organisation (WTO) tariffs.

On chilled, boneless beef, he said, the tariff rate would be the equivalent of a tax of 69% on the value of this product.

At these tariff rates, he added: “Demand for Irish beef in the UK is going to go down to zero unless the product has specific characteristics that people are going to pay way over the odds for, compared to a British product or a product from another WTO member.”

Across all types of Irish beef, the tariff rate would sit closer to 70%. At this rate, he said, the demand for Irish beef would evaporate and another market would have to be found for approximately 250,000t of Irish beef.

“It’s hard to think that a single market within the European Union could take that volume of beef,” he added.

He explained that Ireland needs to communicate this fact with the rest of the EU, adding: “Unless there is an outcome with the UK and the EU, there will be a significant shock to the EU marketplace from Irish beef.

Not only will Irish farmers feel the pain, but beef farmers across the EU will also feel it.

Post-Brexit, if Ireland is granted access to the UK market under a free-trade agreement, it would mean that Irish beef would have to compete with lower-priced product from South American countries.

The Brazilian beef price, based on the year-to-date, is 33% beneath the Irish R3 steer price.

Even if there are no tariffs on the trade between Ireland and the UK, Irish beef suppliers would still have to compete with beef from other WTO members.

“Although it might seem great, we have lost that preferential market access that we enjoy at the moment. We would have extra costs, in terms of regulatory costs, of getting the product to that market.

“The British would have to have inspectors looking at Irish plants and that would add extra costs.” As a result of these additional costs, he said, the price received by Irish farmers would likely drop.

In addition, he said, the UK’s departure from the EU could see the Common Agricultural Policy (CAP) budget decline by 10%. 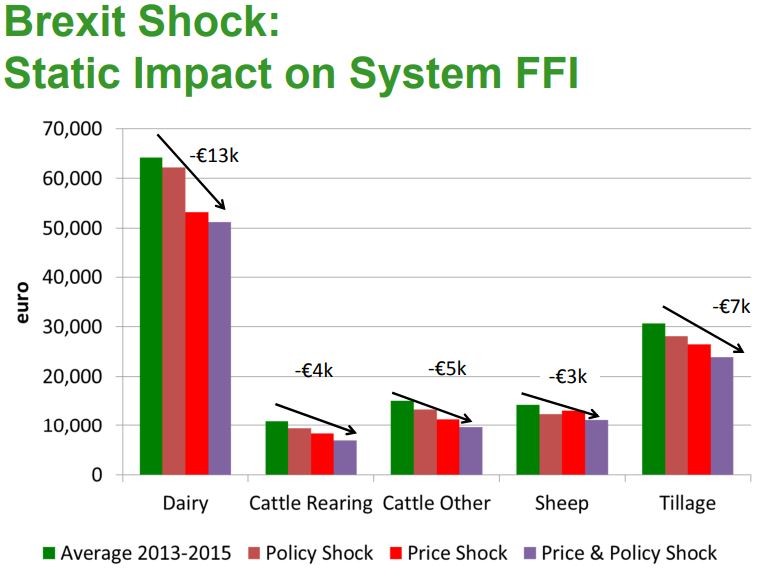 This, along with lower beef prices, would see the average Irish beef farm would experience an income drop of over 35%. For cattle rearing farms, this would be a drop of €4,000; income of cattle other farms could decline by €5,000/annum.

Grow 20% more grass without any extra artificial fertiliser - is it possible?