Beef Focus: ‘The bull was good enough to sell in Scotland, so that’s exactly what we did’

Beef Focus: ‘The bull was good enough to sell in Scotland, so that’s exactly what we did’

‘Small but mighty’ is one way to describe David and Aidan Reynolds’ ‘Bunlahy’ pedigree Angus herd based in Balinalee, Co. Longford.

The brothers both have off-farm jobs, however, they are able to manage the farm in their spare time. The herd consists of 15 cows and is farmed on approximately 49ac in total.

Although the farm is small in terms of cow numbers, this has not been seen as a disadvantage. The Reynolds family have consistently achieved top accolades over the years when it comes to showing and selling their Angus cattle.

History of the herd

Moving to Balinalee in 1975, David and Aidan’s father and mother, Gerard and Helen Reynolds, established the ‘Bunlahy’ Angus herd prefix. Helen’s father, Johnny Slevin, had been farming Hereford and Shorthorn commercial suckler cows on the farm in Ballinalee – prior to Gerard and Helen taking it over.

The herd’s foundation cow was sourced from the ‘Knockdrinan’ Angus herd based in Bornacoola in Co. Leitrim from Gerard’s father, John Gerard Reynolds.

Being the third generation to farm pedigree Angus cattle, both David and Aidan have recently taken over the management of the farm.

However, Helen and Gerard still play an important role on the farm, as David claimed: “Most days I go down to the farm my father would already be ahead of me and have the cattle fed.”

David cannot find a fault in breeding pedigree Angus cattle, simply because it suits the farm’s current system. He explained:

“The thing about the Angus breed is that they are docile and the cows are well fit to calve on their own. In saying that, we are always around if we need to assist any cow at calving, but it’s very rare we do have to intervene. 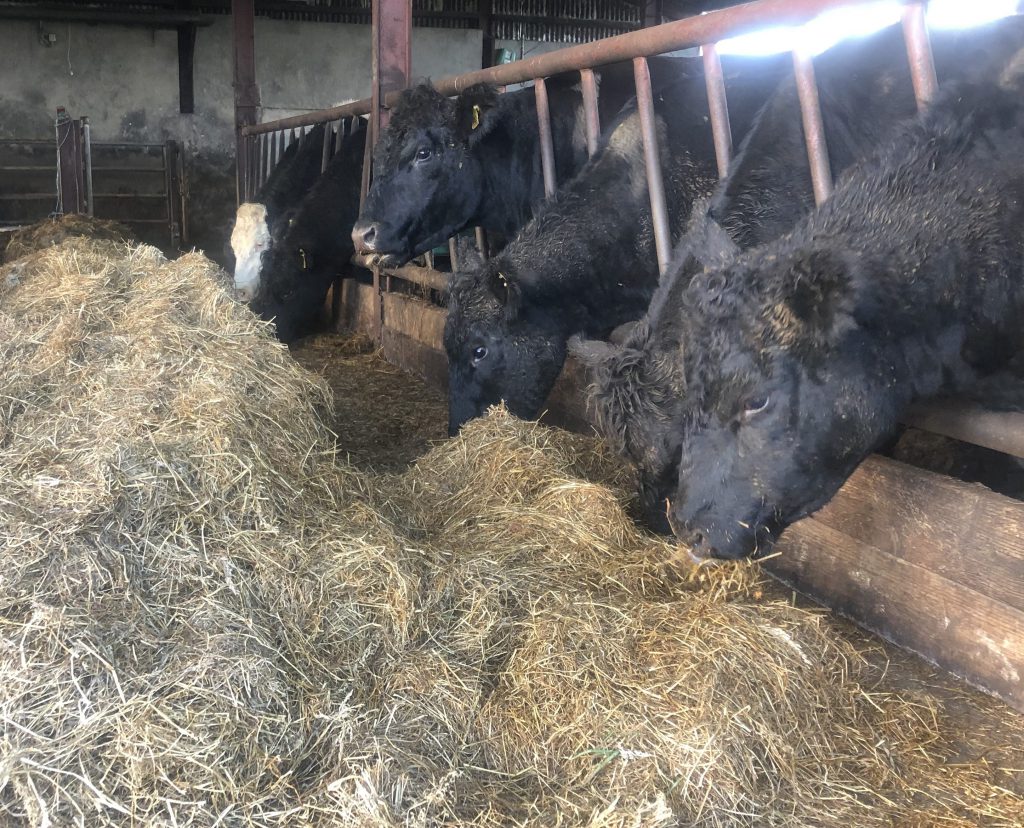 “We are part-time farmers, so we just need to have animals that are easy to manage. These cows have plenty of milk and are well capable of rearing their own calves. The calves are also polled which saves the hassle of having to dehorn the calves.”

Due to the farm’s housing facilities being small in capacity, another bonus which David has seen in breeding Angus cattle is their capability to thrive whilst being outwintered.

“The Angus are a good hardy breed; once the land conditions are favorable, all the feeding that is required is a bit of silage to keep them ticking over.”

Unlike the majority of commercial suckler herds, this farm is moving away from the traditional spring-calving system. Instead, the calving season begins from the middle of May – and continues right through to the month of October.

Forward thinking is one of the main reasons for this, as David explained:

“In previous years, we have calved cows in early spring but we have moved away from that; simply because when we are selling bulls the following spring they will only be yearlings. 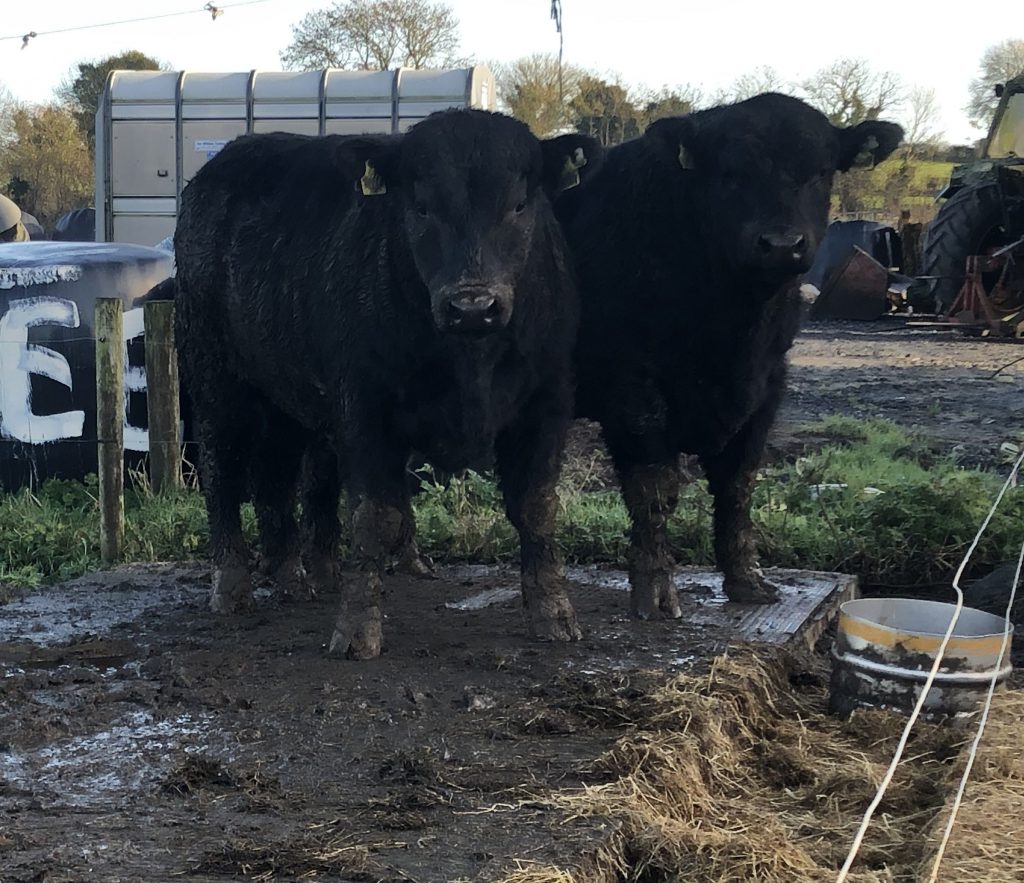 “They are just too young to sell to a farmer for mating with a large herd. It used to be the case where a farmer would buy a soft, 12-month-old bull and mind him for a few months to harden him up before he is let off to the cows.

Farmers just don’t have time for that anymore; if they are buying a bull in the spring they want him to work straight away.

“Some breeders think we are mad that we are calving them this way, but it just suits our system when it comes to selling bulls.”

At the moment, the farm is preparing to sell one bull and two heifers at the upcoming Irish Angus Elite Sale being held in Carrick-on-Shannon on December 12.

One of the lots being sold includes the May 2019-born bull, Bunlahy Setanta, sired by Lisduff Dandy K895. He is currently ranked at just 2% calving difficulty for matings on beef cows.

In the lead up to the sale, this bull has been fed on a diet consisting of silage and up to 6kg/day of concentrates. 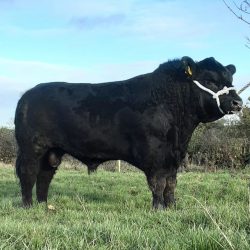 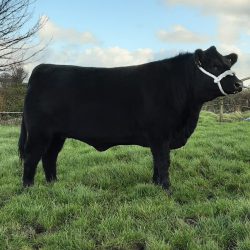 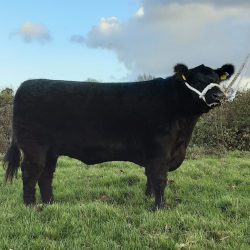 The two heifers on offer include Bunlahy Rita and Bunlahy Rihanna. The heifers pedigree can be traced back to one of the herd’s consistent breeding cows Bunlahy Beatrice, as David explained:

Beatrice was one of our best breeding cows; she has bred two bulls, Bunlahy Big Ben and Bunlahy John G, that sold to AI stations in both the north and south of Ireland. Three of her sons were also sold to breed on pedigree Angus herds.

Prior to selling a bull, David likes to ensure that he is functional and working. For this reason, he has his two heifers scanned in-calf to Bunlahy Setanta.

“Before we sell any bull, they are fertility tested and we like them to have at least one cow or heifer scanned in-calf before they leave. We can then safely say he has no fertility issues.

“We have a clean herd at the minute, but the bulls are vaccinated for leptospirosis before we sell them. This is simply because they may go into the likes of a dairy herd where there is a risk of leptospirosis.

“The bull could contract the disease and then potentially go infertile. It just gives the customer that peace of mind if he is vaccinated.”

Taking a bull to perth

There are not too many pedigree breeders in the south of Ireland that can say they have sold a bull at the Perth pedigree sales (now more commonly known as the Stirling pedigree sales) based in Scotland.

The Reynolds family made the brave move of bringing their bull, Bunlahy Bilty G207, to the Perth sale in 2008. 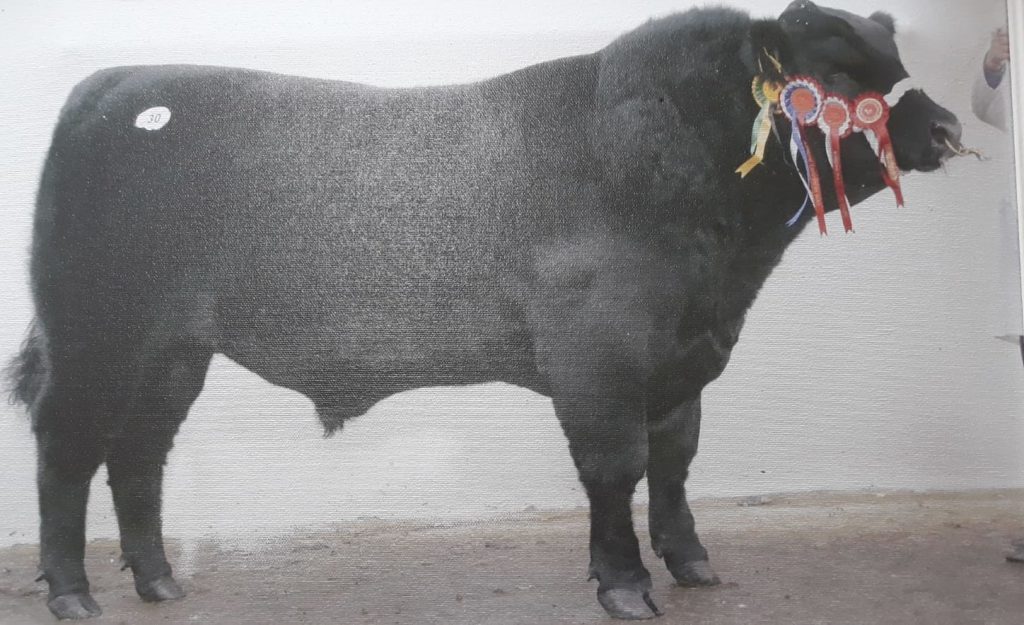 Speaking on the reason for bringing the bull to Scotland, David explained:

“We brought the bull to an Angus sale in Carrick-on-Shannon in April 2008 and we were offered close to €6,500 for him in the ring; but my father simply said no we are not taking that.

“Now as soon as we came out of the sale ring everyone was saying to my father that he was mad not to take the money.

One farmer tried to offer slightly more money outside the ring but we simply said no. My father knew the bull was good enough to sell in Scotland, so that’s exactly what we did.

“So from there, we brought the bull to Perth in October 2008 and he went on to win the intermediate and supreme championship title in the pre-sale show.

As the herd is small in terms of cow numbers, it maximises the best genetics available through the flushing and transferring of embryos from the most consistent breeding cows. David stated:

“My father began doing embryo work in 2012 when he implanted three embryos and got two bull calves. One of these bulls went on to win their class at the Tullamore show and the other bull wasn’t shown. They later went on to sell for €6,000 and €8,000, respectively. 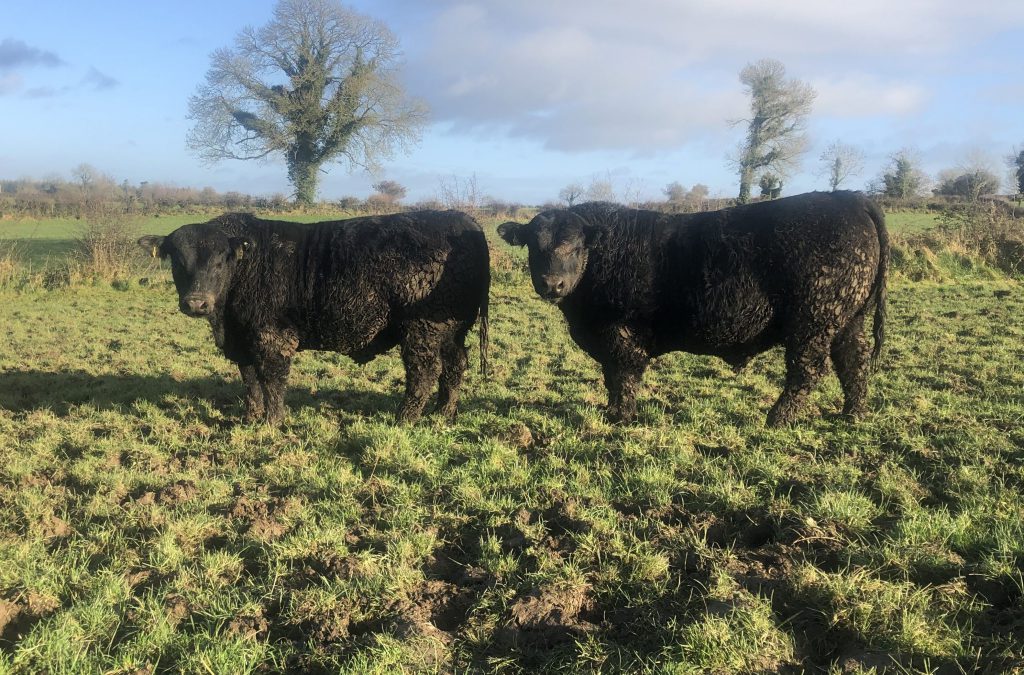 “After that, we didn’t do any embryo work for awhile until two years ago when we implemented five embryos and got four live calves, which was a good result.”

The embryo donor dams include the aforementioned Bunlahy Beatrice and her daughter Bunlahy Beverley.

Another cow whose pedigree can be traced back to one of the herd’s foundation cows, Knockdrinan Kerry, is also included in the embryo donor programme. The main sire used for the flushing programme is Carrigroe Mr. Rebel.

The farm sources its recipient Hereford heifers from a neighboring farmer who purchases the females as calves and rears them until they reach 18-months-old. 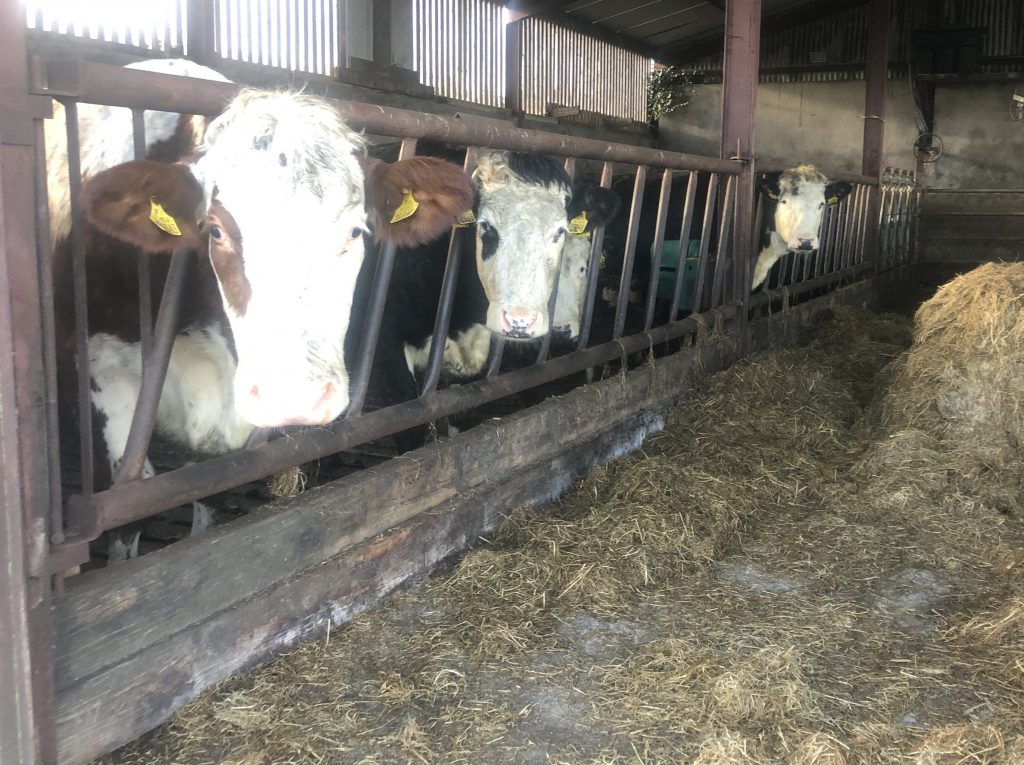 In terms of diet, the recipient heifers and donor cows are fed on silage which was made from wilted grass that was let grow strong and had low nitrogen levels. Alongside this, they are fed 2kg/head of meal per day, with minerals also supplemented into the diet.

They remain on this diet throughout their flushing programme and up to four months after the transfer of embryos has occurred.

“It’s a big gamble with embryo work. Herds can either have great or poor results from it,” according to David.

The farm is aiming to maintain the current number of cows going into the future. David also wants to continue flushing his best cows and implanting embryos – in order to keep bringing the proven lines of breeding back into the herd, alongside some new bloodlines.

“Look, we are a small herd that tries to manage the breeding we have as best as we can – which may be difficult if we had 40 or 50 cows. We would like to be able to hold onto a lot more of our females but unfortunately, with our land constraints that is just not possible.

“On our farm, breeding pedigree Angus is a hobby, it’s a passion and it’s definitely a sickness but once you love what you are doing that’s all that counts,” David concluded.