Beef Focus: ‘I just find the organic system to be a more natural way of farming’

Beef Focus: ‘I just find the organic system to be a more natural way of farming’

Hailing from the county of Westmeath – Patrick Oxley is running a substantial organic farm consisting of both a suckler-to-beef and tillage enterprise.

The farm is composed of approximately 200ac, which is partly owned and rented. Patrick only began farming from scratch back in 2012 when he took over the family farm which had been leased out since 1999. Prior to that he had been working as a lorry driver and is a qualified electrician.

The farm’s conversion into an organic status began just five years ago when he made the decision to move away from a conventional farming system.

Patrick explains: “I was only farming for two years when I made the decision, so I was very much open for change.”

Currently the herd comprises 40 suckler cows which are calved down in both the spring and autumn. However, Patrick is aiming to focus solely on spring calving in the years ahead.

“We are operating two periods of calving at the minute, but calving the cows down in April is proving to be more of a success in terms of management.

“The health of the spring-born calf is never a major issue and there is less meal feeding required for the cow too,” Patrick added. 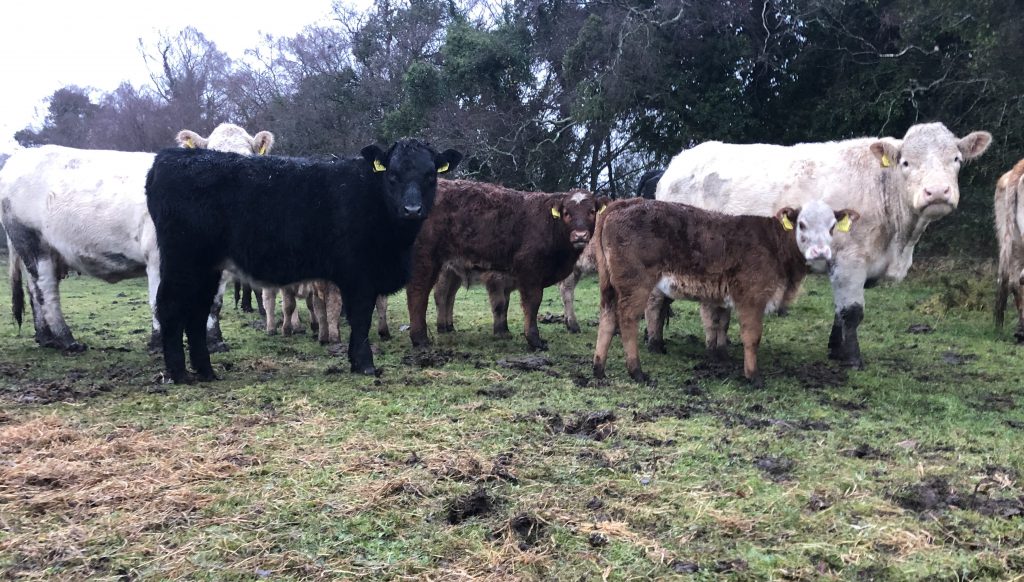 The breed composition of the herd is made up of Limousin, Hereford and Angus-cross cows. A Limousin stock bull has taken pride and place within the herd over recent years.

“I found the Limousin cross with Hereford cows left me with the easiest animals to finish off-grass. Without getting meal, calves from this cross were fit for slaughter close to nearly a year ahead of the cattle with more continental breeding.”

This year, Patrick made the decision to purchase an Angus bull to run with his herd.

“The reason why I moved to using an Angus bull is to benefit from both their easy fleshing ability and early-maturing.” 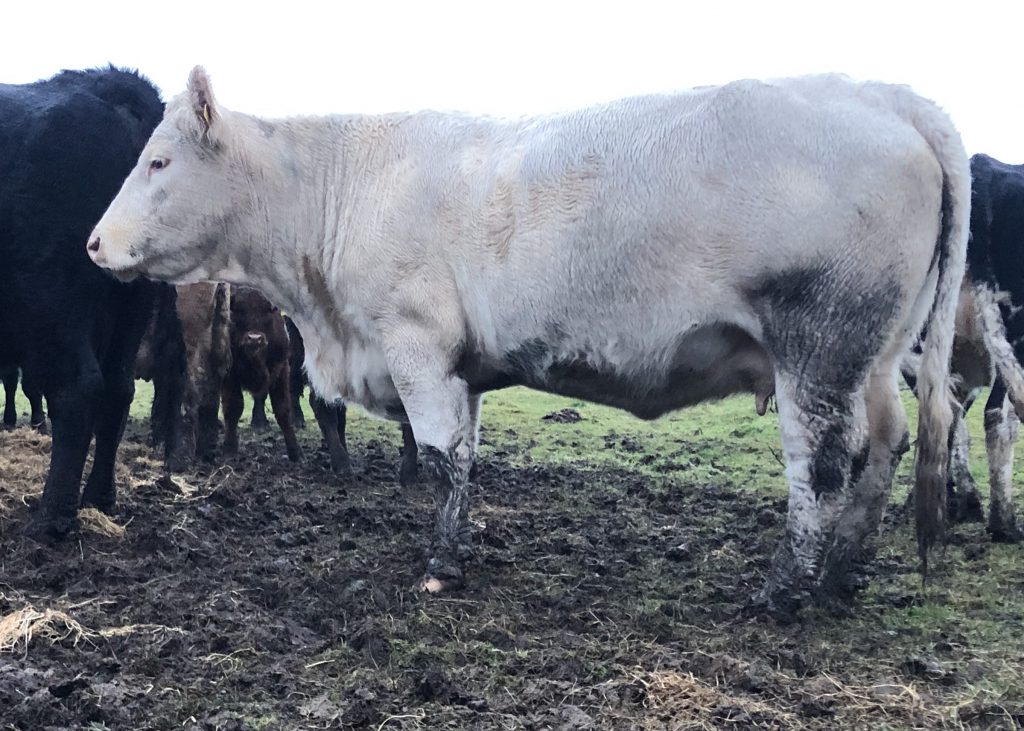 Replacement females for the herd are sourced off-farm. Heifers have been purchased in previous years from both organic herds and through the local mart, as Patrick explained:

“I’m limited to the numbers that I can buy through the mart – if I purchase conventional heifers they can operate in the organic system, but they will never gain full organic status.”

Even though it is an organic herd, it is still permitted to participate in schemes such as the Beef Environmental Efficiency Pilot – Sucklers (BEEP-S) and the Beef Emergency Aid Measure (BEAM).

All of the progeny are finished on the farm and are slaughtered at an average age of 29-months-old. There are 35 weanlings, 36 cattle aged one-to-two-years-of-age along with 13 cattle aged over two-years-old currently being out-wintered at the moment. 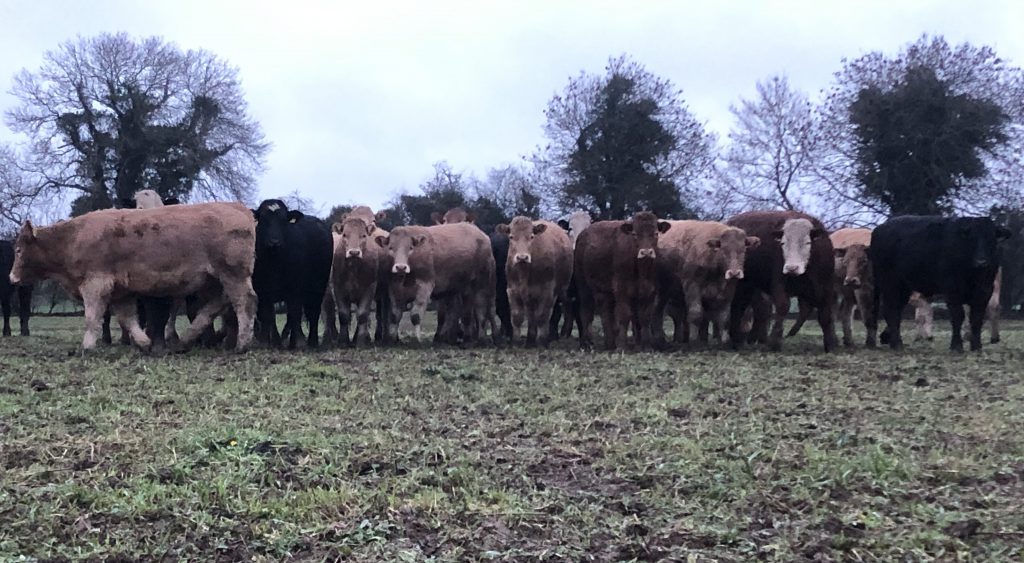 With limitations placed on the concentrate composition which Patrick can feed his animals, he aims to finish his cattle solely off-grass during the summer months.

“My finishing age for some of the cattle is quite high; but just with some of the more late-maturing breeds it is harder to get them fit any earlier solely off grass. The costings of special organic meal is just too high.”

All of the cattle are sold on a flat rate (currently priced at €4.60/kg for both steers and heifers) to Good Herdsmen and slaughtered in either Cahir in Co. Tipperary or Clones, Co. Monaghan.

With the flat rate price, I don’t have to be concerned if the animals grade into an O, R or U-grade.  The heavier I can get the animal the better – while also staying below the maximum carcass weight limit of 420kg.

Unlike conventional beef finishers, Pat is required to pre-book his animals for slaughter more than six months in advance due to the limited number of plants which specialise in slaughtering organic cattle.

He has already pre-booked his steers and heifers for slaughtering in July 2021.

Due to the animals being farmed organically, the use of antibiotics needs to be avoided if possible on the farm. Although from an animal welfare point of view, if an animal is sick and requires an antibiotic, this can be administered.

If an animal requires antibiotic treatment I get advice from the local vet. With an organic farm, the regulatory board are not going to want to see an animal suffer.

From then on, depending on the amount of the antibiotic used and the strength of the product, the animal either retains or loses their organic status.

Patrick finds that his issues with internal parasites such a liver fluke or lung worm are minimal on the farm.

“I only have to dose the animals once a year which I find great. There are neighboring farmers that have to continuously dose their animals, but I don’t seem to have many issues,” he said. 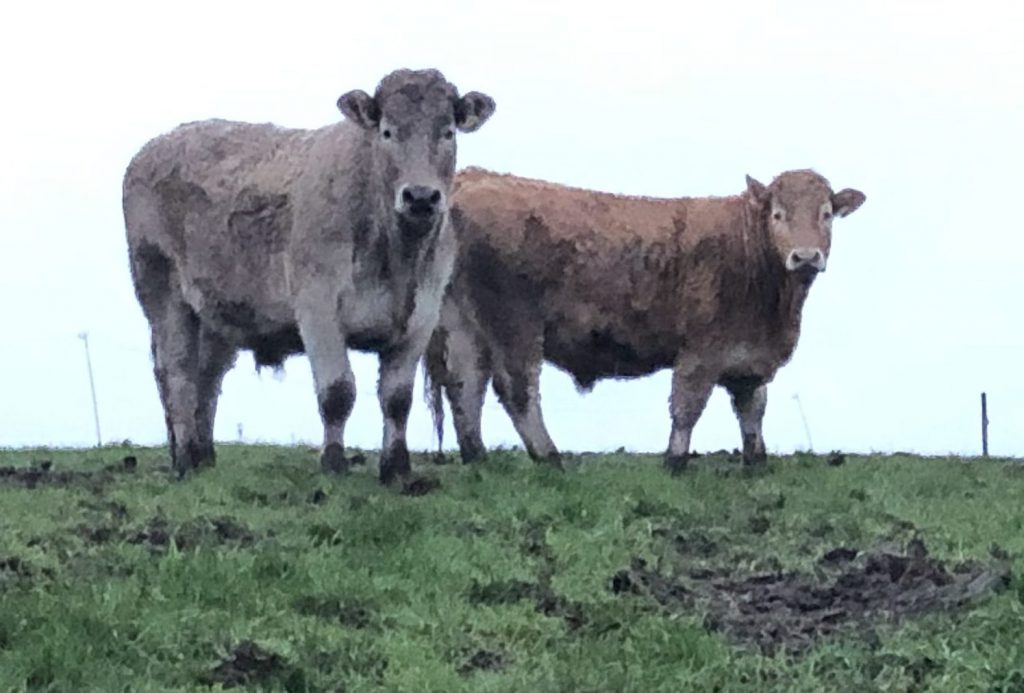 “The withdrawal period is one of the only factors to keep in mind, as this can be close to treble the time which is allowed on a conventional farm.”

A vaccination program is also implemented to reduce the threat of a pneumonia outbreak and then potentially requiring antibiotic intervention.

Both spring and winter organic oats are grown on the farm, with this year’s winter crop being sowed in mid-October. The crop was sown on a total of 46ac, yielding an average of 1.7t/ac this year. 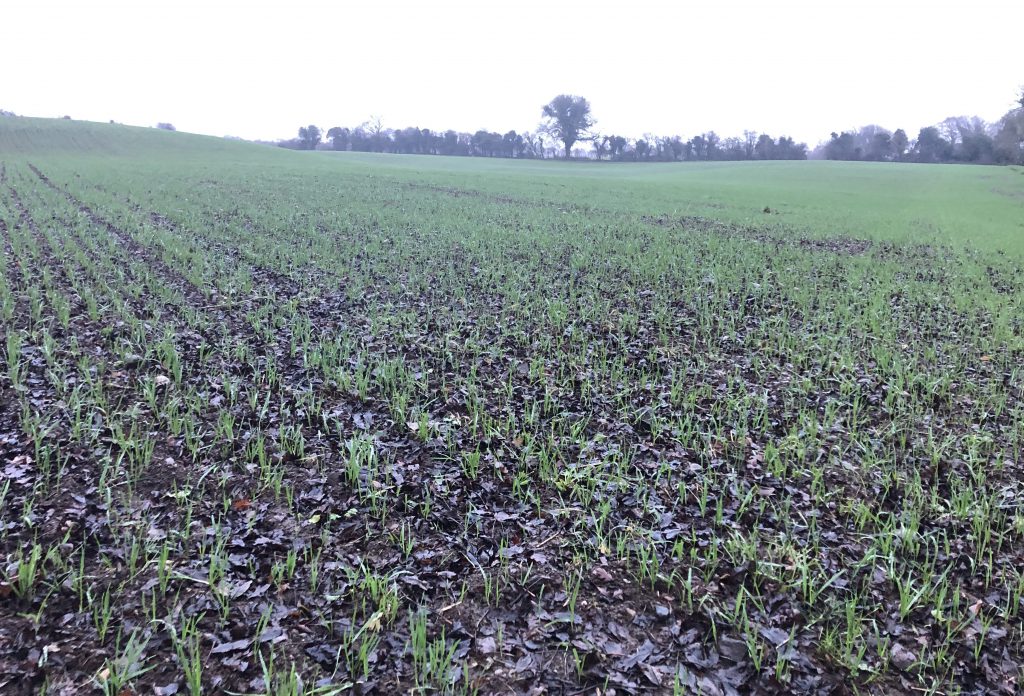 With Patrick selling his produce to Flahavans mills in Co. Waterford, he claims that out of his whole organic system, this enterprise is the most profitable.

The oats is where I see the major gains. This year I sold my crop for a margin that is substantially ahead in terms of price when compared to the conventional oats.

Once the oats are harvested the cattle are grazed and out-wintered on the stubble grown before the following year’s crop is sown.

Due to there being very little housing facilities available on the farm, the majority of the cattle on the farm are outwintered – with silage being fed to the cattle in the fields.

For the time of year, ground conditions on the land are holding up considerably well, with very little poaching being noted.

“I am building a shed with a concrete floor at the moment because the main problem with out-wintering cattle is that you won’t have the organic dung or slurry to spread back onto land in the spring,” Patrick explained.

“Apart from that, the cattle are happy to be out grazing, there is plenty of shelter provided in the fields for them.”

Patrick has grown 7ac of Redstart crop – a hybrid of forage rape and kale – which is targeted to be used for weanlings to graze beginning next week. 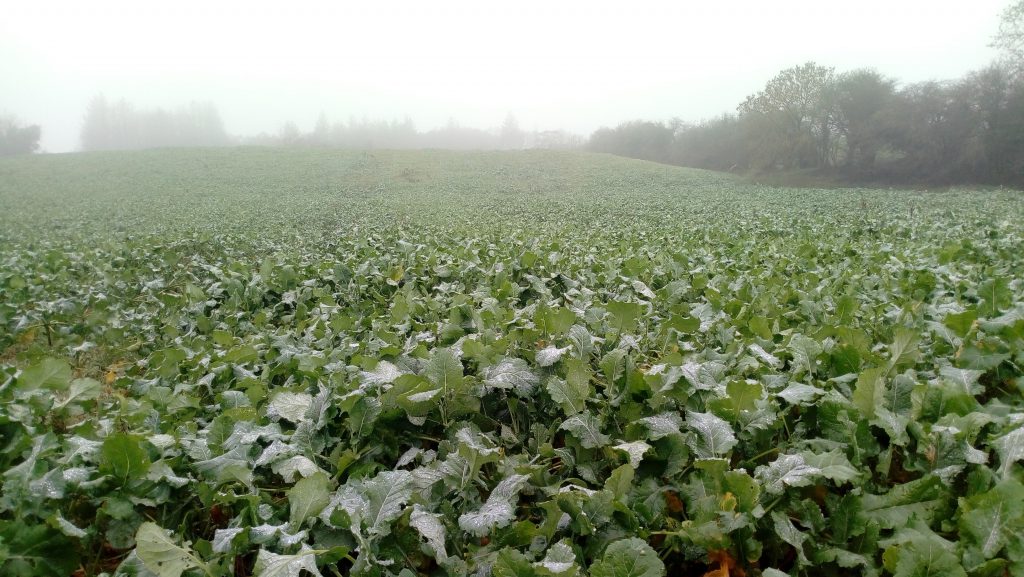 High-quality, Dry Matter Digestibility (DMD) silage (above 70% DMD) will also be fed alongside the high-energy crop to account for 50% of the animal’s diet.

Patrick has no regrets about his conversion to the organic system, in-fact he is looking to lease more land to expand further. Although, like every farming enterprise, there can be slight drawbacks.

“My only issue is the weeds; the fact that I can’t use any herbicide sprays means they are high in numbers and it can be hard to maintain underneath the electric fence wiring,” Patrick stated. 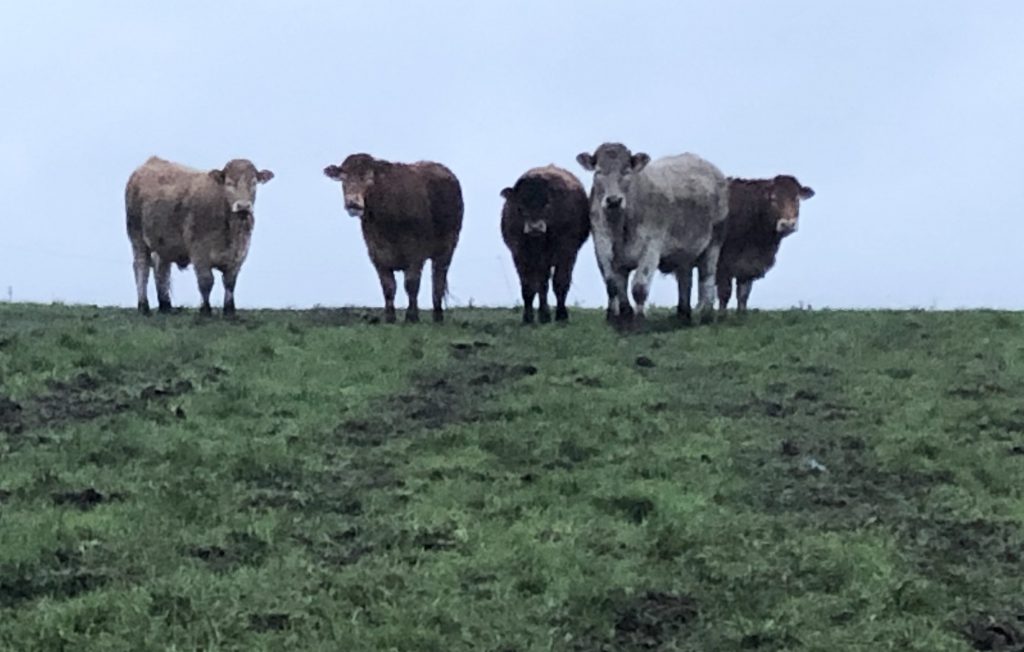 Overall though, Patrick insists if he was to complete the conversion again, he would.

People say that there is a lot of paperwork involved with an organic farming system – but there isn’t really when you compare it to the likes of a Bord Bia Quality Assurance inspection.

“I’m very happy with what I am operating at the minute. I just find the organic system to be a more natural way of farming, in saying that, there is always going to be a necessity for conventional farming,” Patrick concluded.