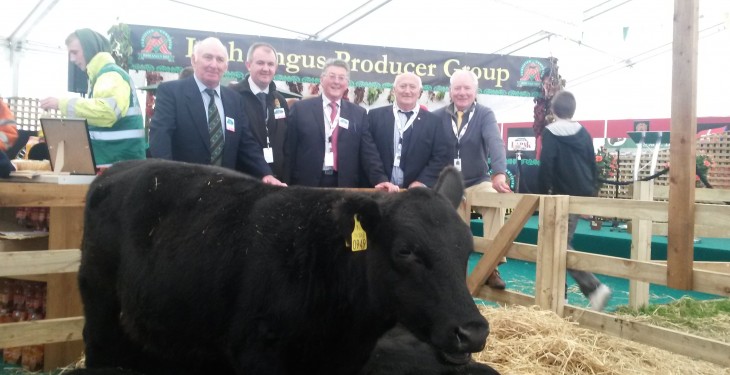 The bonus paid to Angus producers last year was worth €2.8 million, according to Charles Smith, Director of the Irish Aberdeen-Angus Producers Group.

Since the mid 1990s, the Angus breed in Ireland has been on an upward trajectory, he says, and from a handful of breeders, the Irish Aberdeen-Angus Producers Group today has over 8,000 members.

Speaking at the National Ploughing Championships, Charles said that from the modest beginnings of supplying Quinnsworth with 20 cattle a week, the group grew and became involved with Kepak and was soon supplying 100 cattle a week. “The six founding members knew that for the breed to develop they would need to co-ordinate the production and marketing of their product.”

However, the initial focus was about getting people interested and bringing the breed back to life, to use Angus bulls and produce Angus heifers, during a time when beef production in Ireland was about intervention. “Beef production in Ireland had a large kill in the autumn that featured heavy carcasses. There was no round-the-year need for cattle.”

The emergence of supermarkets also saw the growth in retailers offering products with a point of difference. “Retailers also found that if people came in to buy their meat there they would do the rest of their shopping there too. They were also trying to differentiate their ranges. Tesco’s premium range, saw an opportunity to link in us to make a point of difference. Our role as a producer group broadeend, from just providing an outlet for Angus cattle, but also to providing year-round supply of cattle.”

Within a few years, ABP came on board with the group. According to Charles, it was a good fit for the producer group, as it was focused on meat quality and what the retailers wanted. “They were concerned about offering a solution to what the retailers wanted and they were offering us access to a very large customer base. Today, we have a system where Kepak, ABP and the Angus Producers Group work in partnership from breeding right up to building consumer awareness.”

He says the core value the group has is that the people who produce certified Angus beef get rewarded for that. “The bonus in 2013 was worth €2.8m over and above the commercial value of the cattle. The return for the retailer in working with the group is that they get a continuous supply of beef.”

To fulfil this demand, he says, the Angus group works closely with its members to ensure that supply is steady year round, or when promotions are happening. To achieve this, the group runs a bonus scheme whereby farmers can receive a tiered bonus to compensate for producing animals at during times of the year when it is more expensive to do so. As well as the financial return, he says, the farmer also has a plan to work towards and knows when he should finish cattle. This he says, suits the small producers very well and 77% of the Angus Producers Group members have less than 10 cattle a year being slaughtered.

The group’s ‘top tier’ producers can also receive a bonus of up to 40c/kg which, on a 300kg animal, is worth €120. “To get that you must have a minimum number of cattle within the 12 months and you must make your farm available for inspection by retailers. the farmer doing this is so proud of what they are doing they want the local shop to come in and want people to understand what they are doing and they want to be rewarded. So, the consumer ultimately pays for this additional premium.”