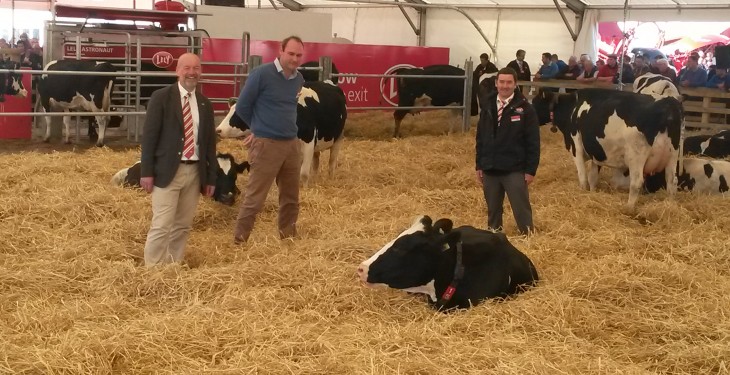 Andy Stewart, Andre van Troost and Tomás Cooney of Lely at the company's stand at the Ploughing.

With the 20,000th Lely Astronaut about to be sold worldwide, the use of robotic milking machines has grown significantly in recent years.

According to Tomás Cooney, New Sales Support and Marketing Manager for Lely Atlantic – Ireland and the UK, Lely will have installed 300 robotic milking machines before the end of the year. While its biggest market is Europe, it is seeing growth in the US, Australia and New Zealand. It also recently sold robots into Turkey, Russia and Brazil.

“Our biggest unit to date is a 44-unit milking over 2,000 cows. But many farms in Ireland with the Lely Astronaut are based on milking 50-60 cows,” he said at the National Ploughing Championships.

He also said that there is a huge variety of farmers who are installing the robotic milking machine. “We see different types of customers, from new entrants who want the latest technology, to guys who have been milking for 20-30 years and now want to spend less time milking and more time managing the farm. You also see younger farmers who want to have more time with their families. It’s very simple things – dairy farming and milking is a tough job, so to free up that time is very valuable.”

How to put a value on this, he says is not difficult. “The Astronaut can milk 60-70 cows, every day of the year. Over 10 years it works out at €45 per day – who can employ someone to milk cows for that type of money?”

And it’s not just the additional free time for farmers, the cows benefit too, he says. “We have a system that we call ‘free cow traffic’ that allows the cow to eat, milk and rest as she want. We see cows in better health with the system, often with an increase of 10-15% in milk production. Data from the UK shows that an increase in output of 19% can be achieved within two years. And, If you can produce more milk from less cows, using grass and on farm forage, the farm will be more economically viable.

“Happy cows make happy farmers,” he said, and with a lot of farmers focused on scaling up, the challenge for many will be to cope with volatility. “Farm efficiency is going to be huge, so making the best use of your farm and grass will be vital. The Lely Astronaut is a cow-friendly approach to milking. It puts the cow in control.

“One of the key things is the ‘graze way grazing gate’ where the cows communicate with the astronaut. They go through the graze way and the Astronaut knows if she has been milked and, if so, she will be let out to a specific paddock, and if not milked she is directed back for milking.”

Tomás went on to say that Irish farmers are seeing the abolition of quotas as a challenge and an opportunity. “We noticed last year that people were thinking ahead and asking questions and with the Food Harvest 2020 policy they have been thinking about it for a number of years.”

However, he said it’s a waiting game for many to see how much they can produce and the milk price that may be paid.

With six Lely centres in Ireland, the company says it is on hand to support farmers with the system and to provide farm management support. “We advise on how best to manage cows and if we see things on farms not being done in the right way, we will advise how to do things better, outside the milking machine.”