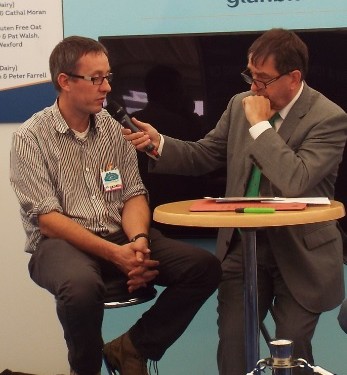 Michael Doran being interviewed at the Glanbia stand at the Ploughing.

“Milk prices would have to drop to 22c/L for me to be worse off than I was in beef, when it stands alone without single farm payments,” new entrant to dairy Michael Doran told crowds at the Ploughing.

The former IFA Livestock Chairman was a high profile convert to dairy and he took time out to detail his experience of the changeover  at the Glanbia stand at the National Ploughing Championships.

“Our farm has always been a beef farm with some tillage on it as well. We had 120 suckler cows, finishing everything. I was also IFA Livestock Chairman so the commitment to beef was 100%.”

The Wexford man outlined what really forced him to really re-examine his situation was when his son, who was born two years ago this week, spent awhile in Crumlin Children’s Hospital in intensive care.

“When you are sitting in intensive care and everything is out of your control you end up having time on your hands. I just ended up researching Teagasc profit monitors. Looking at the dairy side and just seeing the return that could be generated and also the abolition of milk quotas and the opportunities there. That’s what convinced me.”

Cow numbers are currently at the 70 mark heading for 80 on the farm. “With incalf heifers for next year we have 125 ready to calve down I would be hoping to buy maybe another 25-50 next year as the last of the sucklers will be going at that stage. We have a 55ha milking platform at the moment would be hoping to push that to 180 cows the following year,” he said.

On the change of lifestyle that comes with being a dairy farmer Doran commented: “The only difference on lifestyle was that I started an hour earlier in the morning. But when I finished milk the cows in the evening that was it my days work was done.

“Where as in the past you were going back out, maybe you were spreading slurry or you were at something all day and you had to go back out and feed cattle when you come home at 6 or 7 in the evening.

“It is more structured now and it’s actually an easier lifestyle. With beef we were spring and autumn calving there were so many different groups of animals on the farm. Next year when I am fully dairy I will have a lot less groups.