ABP had ‘no choice’ but to seek court injunction

The resumption of blockades at ABP meat plants left the processor with “no choice” but to seek an injunction from the High Court, it has been stated.

This evening, Tuesday, August 27, it emerged that the owners of up to a dozen meat plants have been granted temporary High Court injunctions restraining groups of protesters from blockading their factories and intimidating staff and suppliers.

The action comes in light of fears that the protesting could jeopardise a multi-million euro meat deal with China – a Chinese delegation is due to visit the meat factories in the next few days to carry out inspections of processing and hygiene with a view to increasing exports to the Chinese market.

In a statement following the announcement, a spokesperson for ABP said: “The resumption of blockades at our processing sites have left ABP with no choice but to seek an injunction to allow processing to resume.

“Last week, our industry representative body, Meat Industry Ireland (MII), reached agreement with farming organisations to facilitate a programme of work over the next month.

“However, blockades resumed on Sunday night.

“ABP is at a loss to understand why in the middle of a process set up by the minister, and agreed by all parties we are now in this situation.

“The granting of the injunction clarifies that these protests were totally unwarranted and unlawful,” the statement outlines.

Meanwhile, the Minister for Agriculture, Food and the Marine, Michael Creed, is said to be “happy to facilitate” further beef talks; however, it has been reiterated that he “cannot intervene” in dialogue on beef prices.

As independent farmer protests continue to take place outside a growing number of meat processing plants around the country – including ABP in Cahir, Co. Tipperary; Dawn Meats in Grannagh, Co. Waterford; ABP in Ferrybank, Co. Waterford; Liffey Meats in Ballyjamesduff, Co. Cavan; Kepak in Ennis, Co. Clare; and Slaney Foods in Bunclody, Co. Wexford – a spokesperson for the minister has outlined his official position.

When asked if the minister intends to reconvene the round-table beef talks, the spokesperson said: “Should further discussions be agreed to by all stakeholders the minister is happy to facilitate such dialogue – notwithstanding the fact that the protests currently taking place at meat processing facilities are not mandated by any farm organisations previously involved in the talks process.

Nor is it clear how the demands of individual protesters can be met through further talks.

The spokesperson continued: “The minister cannot legally have any role in determining the prices for beef, or any other commodity.

“Nor can the minister for the Department of Agriculture, Food and the Marine intervene in the determination of prices.” 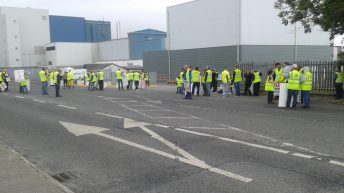