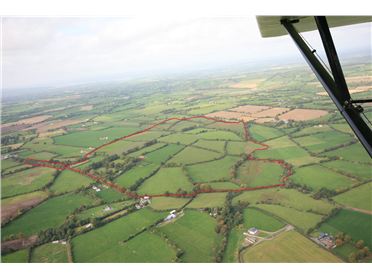 An aerial view of the farm near Nenagh, Tipperary.

A large farm of 258 acres outside Nenagh, Tipperary sold recently at auction for just over €8,500/acre.

The farm of land at Carmina, Ballymackey, near Nenagh, was sold at auction by Dublin-based auctioneers Bergins.

The auctioneer said bidding on the day started at €1m and lasted an hour an a half before the gavel came down at €2,205,000.

Denis Bergin described the Tipperary farm as being on one block, of 21 divisions and included a 1940’s bungalow. He said that interest prior to the auction came from every corner of the country, but boiled down to three interested parties on the day. The most consistent of the three bidders was the eventual buyer, he said.

The auctioneer said he the vendors were very happy with the outcome of the sale.

The Tipperary farm was originally part of the Bowen estate and has over 1km of road frontage. It has an old-style farmyard and the Ollatrim River makes up part of the land’s boundary. The land itself, he said, is good quality and would be suitable for both tillage or grazing, although some of the fields closest the river are more for summer grazing. The limestone land, he said, has been farmed well over the years.

It is believed that the farm was bought on the day by a local Tipperary businessman.