Think you know what Ireland’s most popular fruit and veg are? 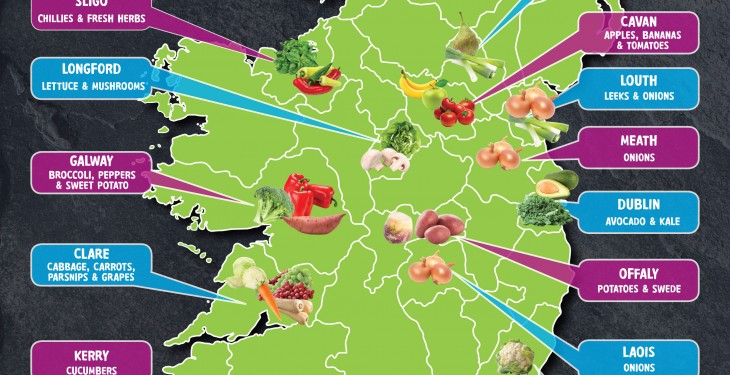 Are you eating your five a day? With almost 70m bananas sold in stores every year, bananas are at the top selling of the fruit and vegetable charts, Tesco says.

Bananas were the second most popular fruit and veg in Clare, Donegal, Galway, Kildare and Mayo where people favoured berries ahead of the yellow fruit.

With growers in Ireland preparing to harvest new season crops, Tesco created a map of Ireland’s fruit and vegetable eating habits by analysing weekly data collected in all of its stores over the past 12 months and bananas have topped the charts in most counties.

Tesco says that cauliflower and kale are the least popular across the country, although Wexford shoppers buy a larger proportion of cauliflower than the rest of the country.

Regionally, Tesco says that Dubliners seem to have bought into food trends more than any other county last year with two of 2014’s trendiest ingredients; kale and avocado more popular in Dublin than the rest of the country.

The survey shows that Sligo shoppers buy a larger proportion of chillies and fresh herbs than the rest of the country. Kerry shoppers meanwhile buy the most cucumbers in the country, it says.

Berries, sweet potatoes and oranges are favoured by Donegal shoppers and potatoes and swedes are the most popular foods to be bought in Offaly, Tesco says. The survey shows that Cavan shoppers buy a more apples than the rest of the country.

Cork shoppers proved to be a fruity bunch, with fruit taking four of the top five fruit and vegetable slots. Bananas, berries, tomatoes and oranges take the top four sports followed by potatoes as the top vegetable in the survey for Cork. Cauliflower, chillies and kale proved to be the least popular in the county.

Nutritionist Elsa Jones, commenting on the results, said that it’s encouraging to see that Irish people are buying a wide variety of fruit and vegetables.

“Getting your five-a-day is one of the most important things you can do for your health. It’s also important to eat a variety of different coloured fruit and vegetables as each colour provides a unique set of nutrients. For optimal health, aim to eat the five colours of the rainbow every day – red, orange, yellow, green and purple,” she said.

Christine Heffernan, Tesco Ireland Corporate Affairs Director said that one of the most interesting parts of [Tesco] jobs is delving into food trends and regional flavour preferences.

“We know that it can be tricky to get your five a day as part of a busy lifestyle and to make it easier on shoppers’ pockets, we continue to focus on lowering prices on the products that matter most to our customers including the fruit and vegetables on this list,” she said.