An extraordinary occurrence took place on a farm in Co. Kilkenny in the past three weeks when not one but two sets of heteropaternal twin calves were born.

Dairy and beef farmer Imelda Kinsella outlined to AgriLand her surprise when the second pair of heteropaternal twins – two calves born of the same cow with different sires – made their first appearance this morning, Thursday, March 5.

However, in spite of the relative rarity of such a pairing, this year was not Imelda’s first experience with mixed twins:

“We had them a couple of years ago as well – this is the fourth time it’s happened. Not this year – just the two this year.

I just saw the white face coming on the second calf so I said ‘God, we’ve a whitehead again!’ It was grand to get it out; and it was the first red whitehead calf born this year anyway so it’s nice to have.

“They were scanned as twins; they were in the ‘maternity ward’ there for the last couple of weeks so I could keep an eye on them,” Imelda explained. 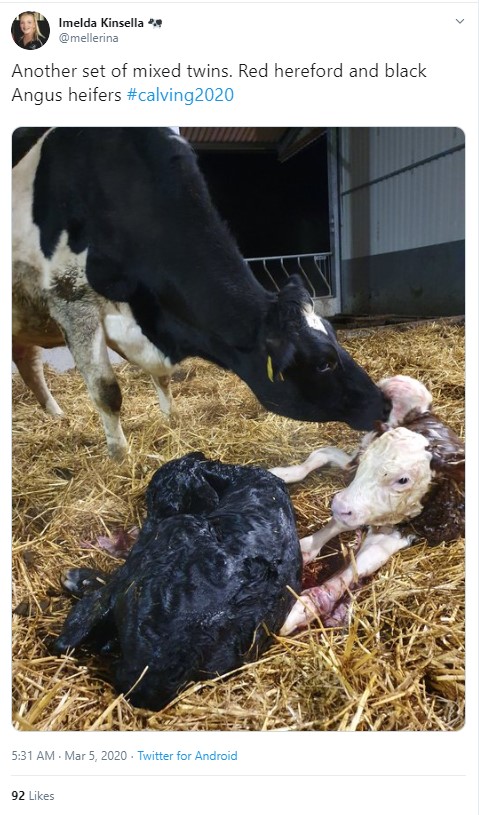 The first set of heteropaternal twins, born on Monday, February 17, comprised a Friesian calf, out of an AI straw, and a Hereford calf, courtesy of one of Imelda’s stock bulls.

“We have four stock bulls – there would be two running at any one time – we switch them in the evenings. We’ve two Angus bulls and two Hereford bulls. 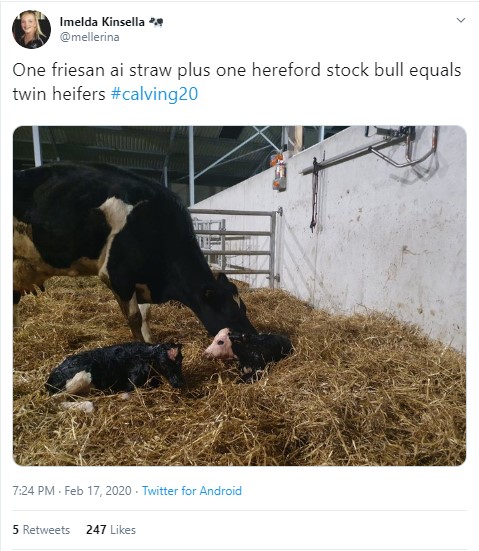 In addition, both sets of twins were pairs of heifers. Imelda outlined her plans for the four calves:

“We’d fatten the beef stock so the calves will be fattened until two years old. They’ll be gone at 24 months and the Friesian obviously will be going back into the dairy herd.”

Concluding, Imelda added: “If we could get the weather to settle now it’d be grand!”