1950s rural Ireland in the picture at ‘Ireland in Focus’ exhibition

Families working together shearing sheep and killing a pig, fair days and preparation for emigration are among the 1950s scenes captured in a fascinating new photography exhibition at the National Museum of Ireland, Decorative Arts and History, Collins Barracks, Dublin.

Considered the most important photographer of the 20th century, Henri Cartier-Bresson was a pioneer of street photography and photojournalism. On assignment from Harper’s Bazaar magazine, he visited Dublin in June 1952, and returned later for a holiday in October 1962.

He travelled throughout the country during both visits, taking photographs in Dublin; Kildare; Westmeath; Galway; Kerry; Cork; Tipperary; Kilkenny; Waterford; and Wexford. His images include landscapes; street scenes; portraits; and public events, and this is the largest number to be displayed in Ireland.

She travelled to Ireland in 1954 on assignment from Life magazine and while here captured over 2,000 images, mostly of Co. Clare – 20 of which are part of the exhibition.

An American anthropologist who was based in Paris, Robert Cresswell lived in Kinvara, Co. Galway, during 1955 and 1956 and took over 400 photographs in the area, including a set of Kodakchrome slides.

The photographs were taken as part of his fieldwork on a 1950s rural community in transition and his findings were published in what is now regarded as a seminal anthropological study of rural life, Une Communauté Rurale de l’Irlande. 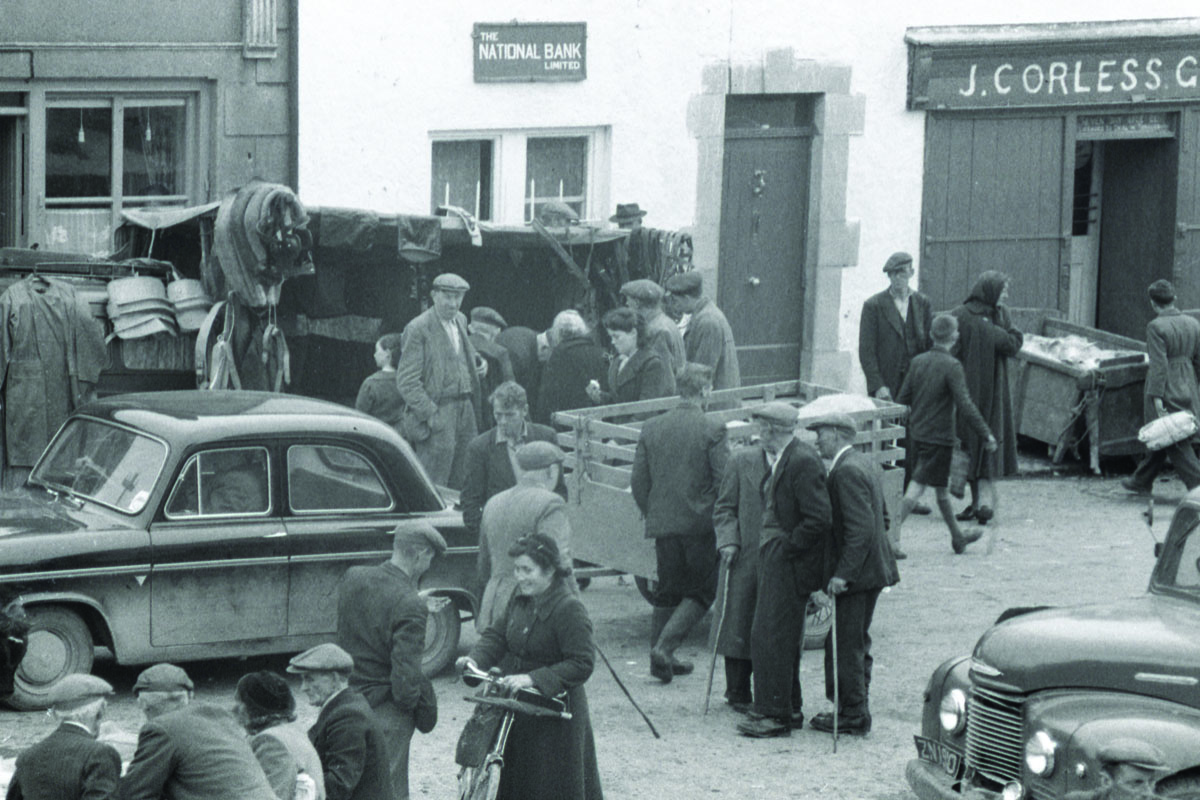 The exhibition explores the way in which the three photographers saw and portrayed Ireland through the people they photographed and the places they visited, during what is generally regarded as one of the more challenging decades in 20th century Ireland.

The photographs give a rare insight into everyday life in 1950s rural Ireland. Corpus Christi processions and punters at the racecourse are among the scenes depicted.

The exhibition notes that many aspects of mid-20th century Irish life were bleak. The 1946 census showed that only two in five Irish males between 30 and 34 years-of-age were married, the lowest proportion in the world.

In an overwhelmingly rural society, just two-fifths of the population lived in towns of over 1,500, the exhibition notes. It also highlights that the numbers incarcerated in county homes, prisons and other places of confinement, such as borstals and Magdalene laundries, were extremely high compared to other countries.

Just in case anyone is tempted to look back at the time through rose-tinted glasses, ‘Ireland in Focus’ reminds us of the chronic under-development that persisted well into the 1950s.

It recalls how a conservative country with a dour political and cultural climate stifled creativity. Access to education was limited and rates of poverty and disease, notably tuberculosis, remained high, the exhibition points out.

Between 1945 and 1961, over half a million people left the country, disproportionately women. Few were to return, the exhibition notes.

Dorothea Lange’s 1954 image of Catherine and Anne O’Halloran, Mount Callan, Co. Clare, saw them pose against the dresser in their home two months before Catherine and her sister Maureen set sail for the US out of Queenstown.

It also looks at the effect of new policies towards the end of the 1950s on those who stayed. The transition from traditional house to new bungalow is captured by Robert Cresswell.

President of Ireland Michael D. Higgins formally opened the exhibition. Among those in attendance were members of the Brogan family from Kinvara, Co. Galway, whose photograph was taken by Robert Cresswell in 1955-1956 and forms part of the exhibition.

Chair of the board of the National Museum of Ireland, Catherine Heaney, said that the photographs in the exhibition provide a unique opportunity to consider how we were viewed across the world, when Ireland was still finding its place in the world as a new republic.

The photographs also allow us to consider how much of ourselves we have left behind, and taken with us, in the intervening 70 years. With images from all over the country, this exhibition will connect with so many communities and families.

Lynn Scarff, director of the National Museum of Ireland, said that the photographers framed a variety of aspects of Irish life at that time and, in doing so, implicitly reflect elements of our society that were known, but often unseen. 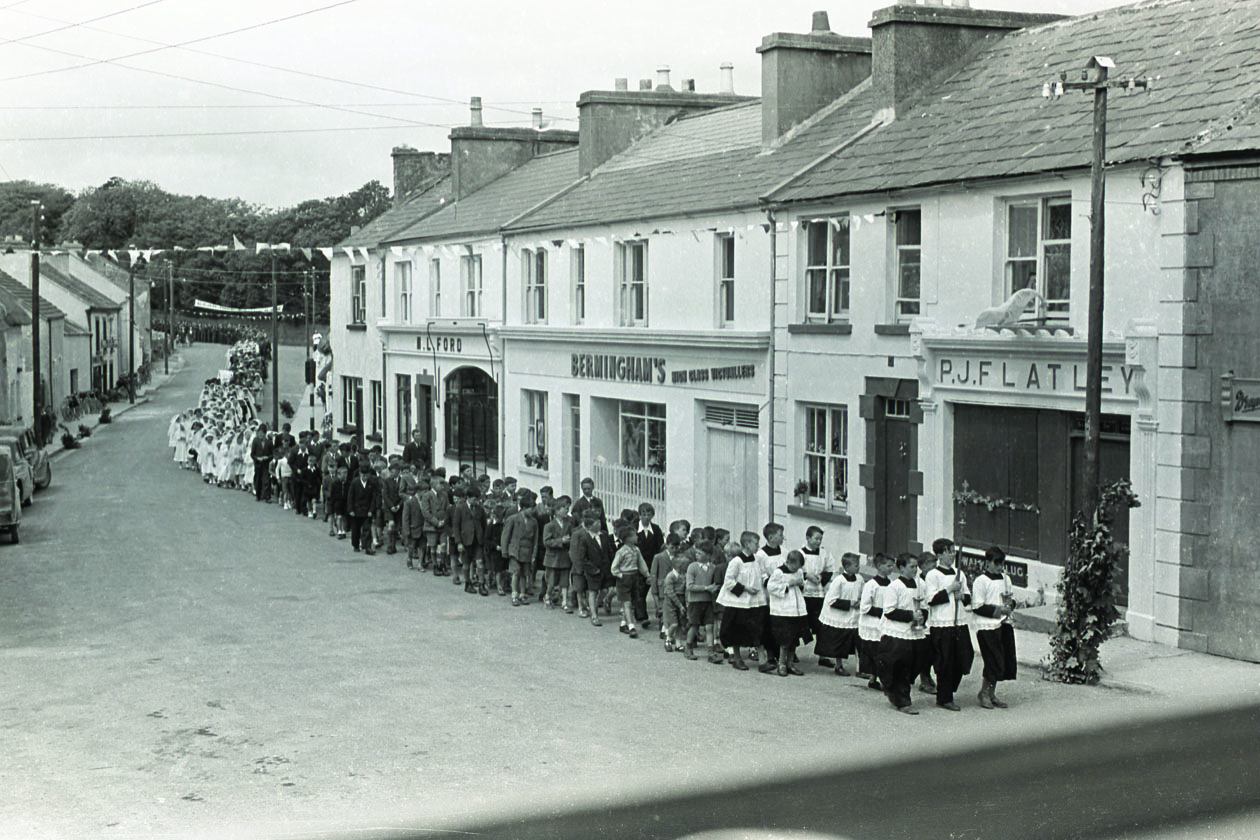 Dr. Audrey Whitty, head of collections and learning at the National Museum of Ireland, said that the exhibition provides a very special insight into the Ireland of yesteryear.

“This was a time when smart phones and social media had not even been conceived, and photography was still a relatively rare commodity, so these images give us a rare insight into what life was like in towns and communities right across the country during what was a very challenging time for Ireland.”

Curator of the exhibition, Dr. Fidelma Mullane, said that Cartier-Bresson, Cresswell and Lange had no family connections with Ireland.

Each one photographed the country with an outsider’s eye. Cresswell lived for 15 months in the Kinvara community as a working anthropologist. His photographs of the people shot in the street, farm or home, are premised on mutual trust, often giving the impression that the images were captured without the presence of a photographer.

“Cartier-Bresson and Lange were professional photographers whose work as street photographers and photojournalists created exceptional images such as those on show in this exhibition.”

‘Ireland in Focus: Photographing Ireland in the 1950s’ will run until the end of April 2020. Admission is free.

Meanwhile, across the capital, in the National Gallery of Ireland, more captivating works by Henri Cartier-Bresson and Dorothea Lange can be seen in ‘Moment in Time: A Legacy of Photographs, Works from the Bank of America Collection’.

It is the first time the extensive exhibition has come to Europe and was originally assembled in the 1960s by collectors, scholars and historians.

Iconic American landscapes, scenes of daily life from inter-war Europe and experimental abstract impressions of both the natural and man-made worlds are among the subjects. Themes include nature; people; documentary; and art photography.

‘White Deer, County Wicklow’ by Paul Caponigro is among the many intriguing images featured.

An absorbing exhibition, ‘Moment in Time’ will run until March 22, 2020. Tickets cost €15/€5, with Friends of the National Gallery and under 18s admitted free. Full details are on: www.nationalgallery.ie.

4kgs of prehistoric gold discovered by farmer goes on display