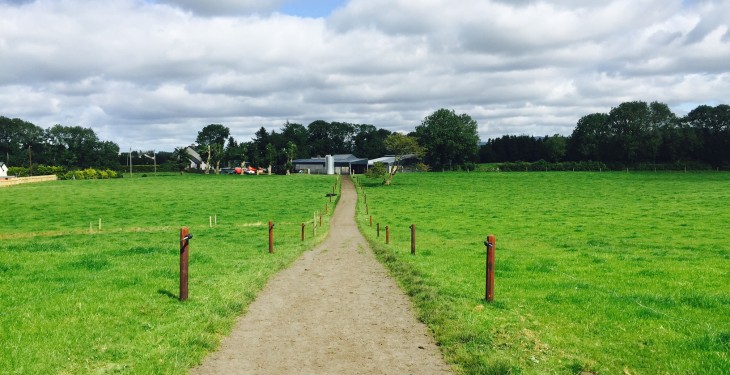 David Kerr milks a herd of 155 cows under a spring-calving system in Ballyfin, Co. Laois. He’s at the top of his game when it comes to efficiency and works just 20 hours per year for each cow in his herd.

When compared to his peers, David fits firmly within the top 5% of efficient farmers. The 20 hours per cow figure is more than 50% lower than the average number of hours worked by farmers surveyed in a recent Teagasc labour study.

Addressing the 650 delegates in attendance, David explained that he is farming 64ha – 52ha in one block and 12ha across the road – just outside Portlaoise.

“We’ve grown around 13.5-14t/ha (dry matter per hectare) for the last few years. It will never be a 17t/ha farm because there’s a fair proportion of heavy soils.

“We’re stocked at 2.6 cows per hectare and the herd EBI (Economic Breeding Index) is €140. The herd’s about 65% crossbred at this stage, after coming from a pedigree black and white herd eight years ago.”

Originally, the Laois-based farmer aimed for a 500kg cow, producing 500kg of milk solids from a concentrate input of 500kg.

“We have more or less achieved that target at this stage, so the bar is going to have to be raised in that regard. But that’s the beauty of farming, there’s always something to go after,” he explained.

In 2006, as part of a Nuffield Scholarship, David spent a month travelling around New Zealand. During this time, he met dairy farmers, looked at their infrastructure and listened to their observations.

The topic of his Nuffield Scholarship was ‘Transition to scale using pastoral dairy farming systems’. A chapter of this report addressed the labour requirements of expanding dairy farms.

During David’s travels, he was struck that – once the breeding and calving seasons were over – these farmers were not actually very busy and the main chunk of their daily work revolved around milking.

“It has to be said that this was before the significant spike in milk prices, which seemed to have increased supplementation and complicated systems.”

Following this study, David recommended that 160 cows per labour unit – with the above management practices and the use of casual labour at calving and relief milkers – was a viable model for Irish dairy farmers in the medium term.

In 2006, he set about developing and expanding his dairy enterprise. Over the intervening period, he has grown from 42 to 155 cows; made numerous infrastructural developments; and purchased 30ac of land. All of this was achieved without employing full-time, paid labour. 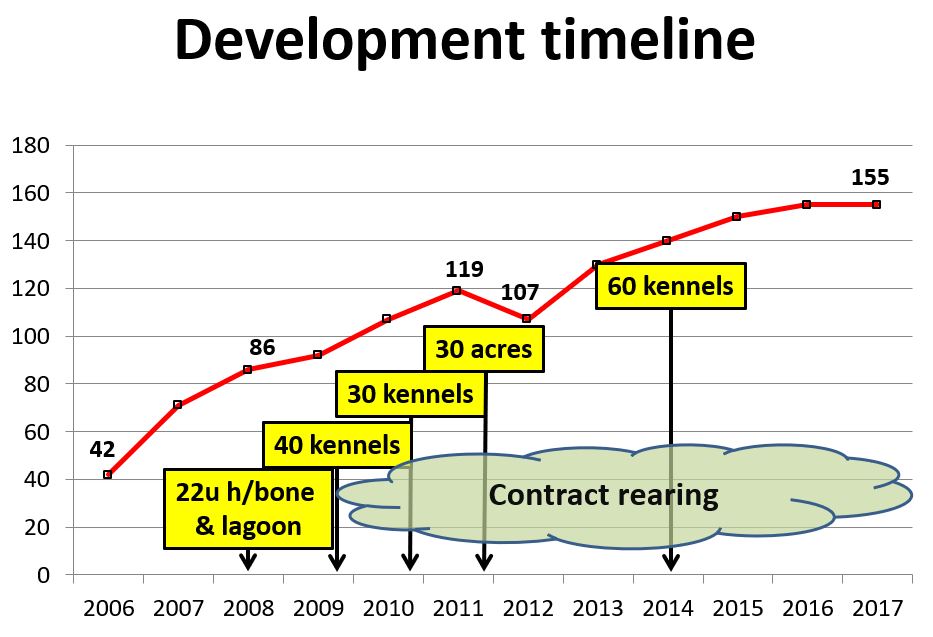 In 2006, the Kerr family started availing of students from Switzerland and Holland. They have been constantly on the farm with the exception of one year. These students play a vital role in the business, but they are also encouraged to travel around Ireland for a week before they go home.

A relief milker is also employed on the farm and he has been working with the family for a number of years.

“We have a very fertile herd and we can target labour. We have a tsunami of work coming in about three weeks time and I take on student labour in the spring for 10 weeks.

“Realistically, we are looking at calving about 50% of the herd in 16-17 days. But, we know it’s coming and we can prepare for it. The labour is in place, the grass is on the farm and the buildings are ready,” he said. 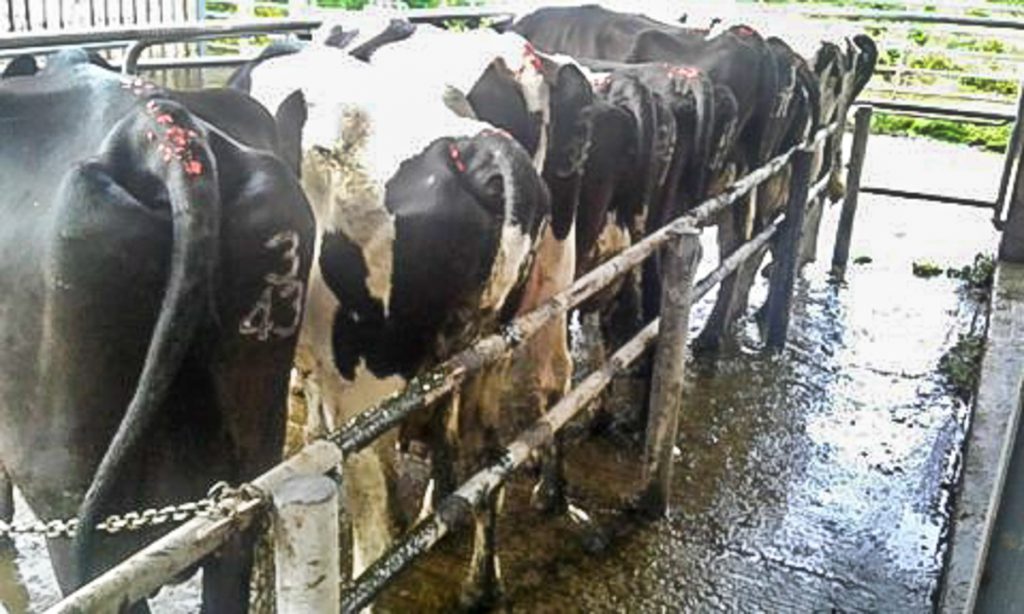 Why is the farm so efficient?

What makes David’s system attractive is that it is not dependent on him. As the system is simple, relief staff can be brought into cover David’s role in scenarios where he has to leave the farm. Last year, he was able to leave the farm for one month and the operation stayed afloat despite his absence.

By focusing on key areas – such as grassland management, breeding, calf management and milking – he’s able to streamline the business. The strategic use of contractors and contractor rearers means that David’s focus remains firmly on his cows – the enterprise that pays the bills.

This move also removes a number of layers of complication from the business, which is necessary when aiming to develop a “simple, grass-based system”.

The Laois-based farmer has been measuring grass for over 20 years and the farm is walked twice weekly during periods of rapid growth.

Farming on differing soil types – ranging from free draining down to cut-away bog – requires totally different management practices for both types of land, he explained.

On-off grazing works on probably 75% of the farm and the other block is either on or off. When the weather is good, we go after it if there’s any sort of reasonable cover on the soil.

“The target cover is a critical cover for us. We need to get 950-1,000kg/ha on the farm at calving – especially in week two and three. 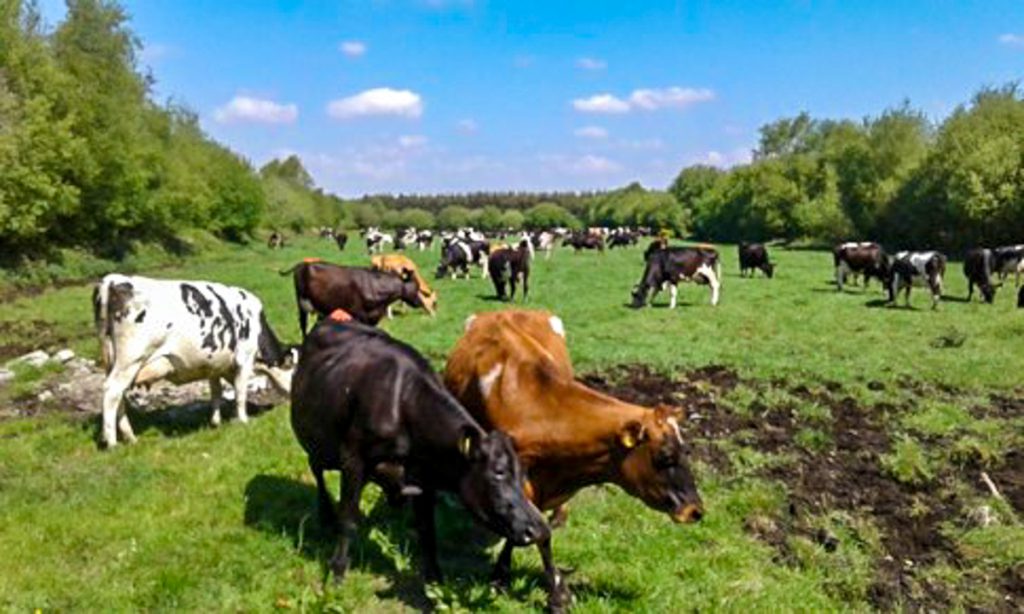 “They’re the busiest weeks on the farm in terms of labour and the cows have to be out full time. I have no issue in bringing the cows back in during March or April; the back is broke in calving at that stage.

“When you are in that blitz of calving, the cows are out and we milk them once a day. That basically drives our requirement to get the target cover and to get grass on the right parts of the farm.”

Since making the move to a bigger herd and focusing solely on dairy, David has noticed that the system has become a lot easier to manage.

“Previously, there was six or seven groups of animals around the place and it was an absolute disaster. Now I have one group of cows and one grazing rotation; it’s very simple to operate.”

As mentioned, David aims for a 500kg cow and he reckons they consume 5t/cow of dry matter each year.

They need 3.5t of grazed grass, 1t of dry matter silage and 0.5kg of concentrates. To stock the farm at three cows per hectare, I need to grow 15t of grass and that would be an ambitious enough target for our farm.

To match grass growth with demand, the farm is currently stocked at 2.6 cows per hectare. 70-80 bales of hay (dry cow feed) are purchased every year and each paddock is cut for silage at least once.

The milking routine and in-calf cows

Early on in the expansion process, David installed a 22-unit parlour – a considerable step up from the six-unit parlour found on the farm previously.

“We went from 2.5 hours putting 15 rows through a six-unit parlour to 40 minutes putting 90 cows – in four rows – through a 22-unit parlour. At the moment, we are up to seven rows.

“Milking is manageable and we’re putting through 140 cows per hour, with washing time to come afterwards.”

He continued: “The parlour is the biggest investment in terms of labour efficiency, as that’s where you spend 33% of your time. The three most important things in the milking parlour are cow flow, cow flow and cow flow.”

During the first two-to-three weeks, once-a-day milking is practiced. At that stage, 90% of heifers will have calved and settled down to the milking routine.

The Alfco drafting system also has an important role to play and David describes it as the “most important machine” on his farm. By using this system, he can draft out any cows that need to be served after milking. The AI technician arrives at 9:00am and the cows are waiting for him. After serving, they are returned to grass.

As cows and heifers come near calving, he explained, they are run through the milking parlour to train the heifers. This is also used as an opportunity to draft cows on the point of calving.

These cows are put into a large, loose shed. No night feeding takes places, as we prefer cows to calve at night.

Cows are checked at 11:30pm and again at 6:00am. Any cows with concerns at the night check will be checked again.

“In the next morning, fresh calves are tagged, navel dressed and will receive 2L of colostrum via a tube,” he added.

Contract rearing also plays an important role in his system, adding: “The heifers are gone nine years at this stage. I didn’t realise what I was missing until 2012, when we bought some land and we brought the heifers home.

I don’t ever want to see them around the place again; they complicated the system and there was more work involved.

David uses the services of a contract rearer in Co. Kilkenny. The calves leave the farm once they are weaned off milk and return at the point of calving. 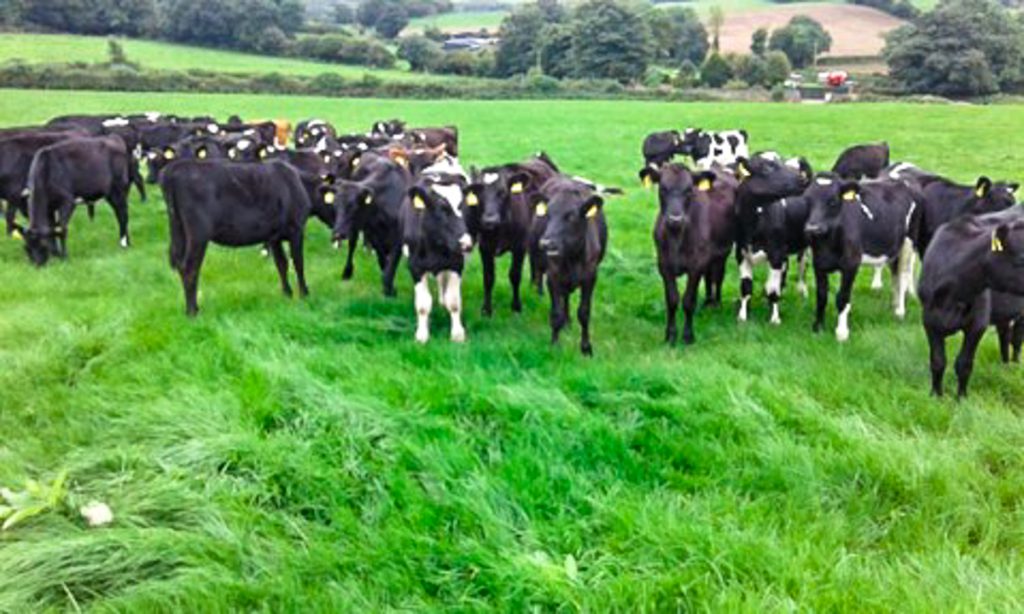 “He takes the heifers and does all the work as regards dosing, weighing, breeding and heat detection. He’s paid by electronic transfer and it’s a good system for him compared to where he was. He left dairying seven or eight years ago and was ‘out fishing with sharks’, as he puts it himself.

“He was buying cattle in the spring and selling them again in the autumn. He’s happy to be back involved with dairy stock and he’s a very good stock man.”

With a compact calving pattern, very few cows calve in April on David’s farm and – if numbers permit – any April-calving cows are often sold.

“We do not undertake any pre-mating heat detection. No bull has been used on the farm in 70 years and given that we mate for 12 weeks, pre-breeding attention would probably lead to fatigue.

From my involvement in sport over the years, I’ve seen more finals lost because of over-training than lack of preparation.

“All cows are tail painted the day before we start AI on May 7. I get a relief milker in at that stage and then they are probably tail painted around day 10-12.

“A scratch card is put on cows that have been served; I don’t have time to be touching up cows with tail paint. It works pretty well, but 10-15% of the scratch cards have to be replaced as they change colour due to licking.”

David is happy with the way the system is operating on his farm, but he warned farmers with less-fertile herds of cows off replicating his lack of pre-breeding activity.

“It’s working pretty well. We run into low single digit empty rates, which has been very consistent over the last number of years.

“A whole-herd scan is not undertaken, as this requires help. We only scan cows that continuously repeat. Last autumn, 7.7% of cows were scanned empty.”

The use of contractors

David also touched on the importance of contractors to his business, adding: “I use contractors to drive my system. These guys have been working on my farm for 10-25 years.”

He also urged other farmers to have respect for contractors, adding: “Payment is an area where there’s an awful lot of messing going on in our industry. Contractors are not banks.

“Our main contractors are paid by standing order and I fix up the balance at the end of the year. From a cash flow point of view, it’s good for me and it’s good for them. There’s no issues with guys coming on time, they’re getting paid and you’re not messed around.

“The two critical things are notice and payment. We have to treat these people with dignity and they will give it back to you in spades.”

He added: “There’s money in this dairy game for contractors and there’s enough to share around for everybody.”