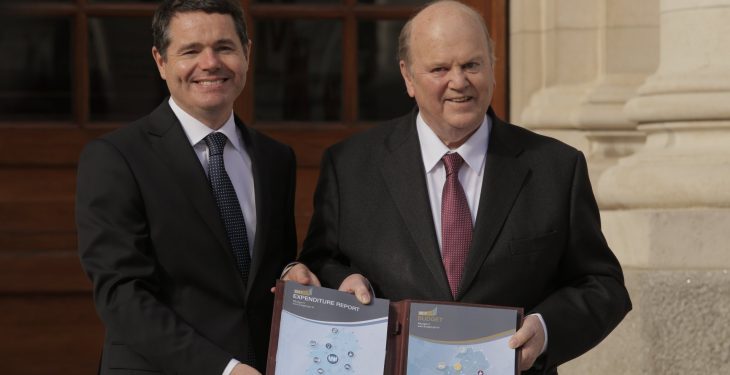 Farming organisations have had a mixed reaction to the measures announced in Budget 2017 for the farming sector earlier today.

Low-cost loans, a €25m sheep scheme and increases in Rural Development Programme spending were all announced as well as a range of other measures by the Government.

The ICMSA President, John Comer, has said that farmers looking at today’s Budget would generally consider it as steady and solid but he was critical of certain measures that he maintained would prove to represent bad value in terms of expenditure versus results.

On the plus side, Comer said that the changes to the USC and the extension of Earned Income Credits for self-employed were general benefits though he pointed out that taxation system still has an in-built bias against farmers and self-employed in terms of individual credit.

However, the ICMSA President was less enthusiastic about the ‘Step-Out’ facility being introduced for income averaging.

He said that it was – as best – a ‘niche solution’ that was irrelevant to the main body of farmers who would have been far better served by the introduction of the Farm Management Deposit Scheme that ICMSA had lobbied for.

“The crippling reality of destructive income volatility could only be addressed by a scheme of this scope and structure and the so-called ‘Step-Out’ would not make any meaningful difference.”

Meanwhile, IFA President Joe Healy welcomed the introduction of a new low-cost loan fund, at an interest rate under 3%, which is to be available to farmers in all sectors.

The IFA President also acknowledged the €107m increase in funding of farm schemes under the Rural Development Programme (RDP), in particular the €69m increase for GLAS to €211m for 50,000 farmers and the new €25m sheep welfare scheme.

“The Government must build on these schemes to reach the €250m target for GLAS set out in the RDP and continue to improve suckler and sheep supports.”

However, he said the decision not to start the restoration of ANC funding in 2017 was disappointing, given the very difficult income situation this year.

Healy said the new flexibility under income averaging, to be introduced for the current year, recognises the impact of price volatility and will help farmers to manage the very difficult cashflow situation on farms.

Healy particularly welcomed the reversal of cuts to Farm Assist and the provision for 500 extra places under the Rural Social Scheme.

Healy said IFA had fought a farm income campaign for the last six months and the significant measures in today’s Budget on low-cost credit, increased funding for farm schemes, the reversal of cuts to Farm Assist and tackling income volatility were in response to this campaign.

The young farmers organisation has welcomed the focus by Finance Minister Michael Noonan on credit, cash flow and land mobility/inheritance in Budget 2017.

Macra President Sean Finan welcomed the move to provide farmers with access to cheaper credit, saying ‘ that affordable credit is the lifeblood of a young farmers business when starting out and establishing themselves in the industry.

Macra also welcomed the extension of the farm restructuring relief scheme until 2019, which will aid land mobility.

This move further extends the existing measure, it said, and will aid the mobility of land allowing farmers to consolidate their holdings in a tax efficient way.

Finan said that getting the correct structural environment regarding land mobility for Irish farming is essential for future growth and competitiveness of the industry.

Macra has also welcomed the increase in the Capital Acquisitions tax threshold in Category A from €280,000 to €310,000.

While Macra had called for an increase to €350,000 Finan said that Macra feels this is a step in the right direction but the Minister Noonan could have gone further.

ICSA President Patrick Kent has expressed disappointment that there seems to be a slowdown in the commitment to bring equality in tax treatment for the self-employed.

“Last year’s budget saw a €550 earned tax credit introduced with a commitment that the subsequent two budgets would also feature an additional €550, instead only €400 has been allocated. This suggests that the commitment to the self-employed is not as strong as it should be,” he said.

The ICSA President commended the decision to increase the Capital Acquisitions Tax (Category A) threshold from €280,000 to €310,000 and expressed the view that further increases in the threshold should be considered in line with increasing asset values.

Regarding the provision to allow farmers to opt out of income averaging Kent said this will be a help this year but a deeper examination of how to tax volatile incomes and the inequities around self-employed taxation is needed.

On spending Kent welcomed the increased spending planned for the Rural Development Programme of €601 million and the well flagged sheep scheme allocation of €25m. However he said that there was an opportunity missed to partially reverse previous cuts to the ANC scheme.

“There is no doubt that low interest loans have a role to replace high interest merchant and short term banking finance for those under pressure with repayments.

“However, ICSA is concerned that in the more medium term low interest loans cannot be used as a sticking plaster to hide deep income problems in all farm sectors,” he said,