Zero Grazer, a one stop shop to manage grass and increase profits

Over the past number of years there has been an increased interest in the concept of zero grazing. The terrible weather forecast for this weekend is likely do little to dampen that interest.

The concept is something more associated with mainland Europe than any part of Ireland, you’d think? However, that attitude has been changing and zero-grazing machines are becoming more common than you think. This is no more or less down to Zero Grazer, the company based at Dromone, Oldcastle, Co Meath.

Niall O’Reilly originally a Cavan man who has been responsible for pioneering the zero grazing concept in Ireland, with his company Zero Grazer, now enter their 10th season in business.

“Lots have happened over the past 10 years, from a massive push in educating farmers that the concept does work, to helping farmers manage there grass. Some experts wrote the concept off without actually knowing what they were talking about. That was the biggest stumbling block for most potential users. In some form or another they had tried it before, a round baler, silage wagon etc. The grass heated or they buried the silage wagon in a wet field and that was it, this doesn’t work. Correct, if your not using the correct machine to do the job. Done correctly you’ll cut costs and maintain output and in most cases increase output.”

He noted: “With our expertise and extensive research, this is being achieved on many farms throughout the country. Before ever selling a machine, a full 12 months was given over to researching the concept in an Irish context. Farmers always respect someone who know what there talking about and we get a lot of credit for that” 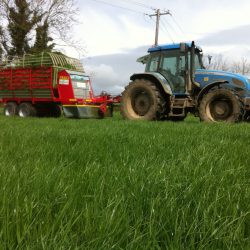 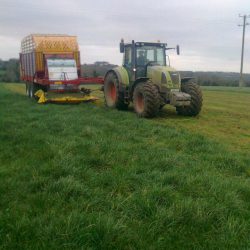 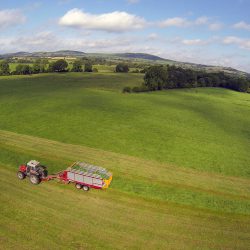 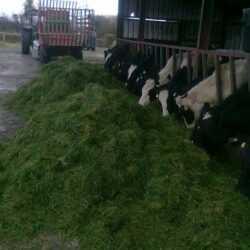 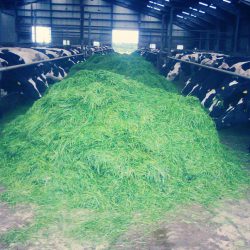 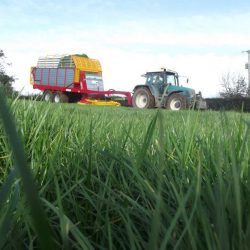 The whole idea behind zero grazing is to replicate what an animal will do and even better. According to O’Reilly, if you’re not using a zero grazing machine well it won’t work. A zero grazing machine is a one pass unit. A mower to cut the grass, an elevator to lift the grass and a trailer to carry the grass from A to B. The one important factor here is the grass is not damaged compared to some other method of cutting and collecting grass, usually more associated with silage cutting.

Over the past 10 years the company have added 14 machines to there range, all produced under the company logo and brand name, Zero Grazer. Machines have been sold in every county in Ireland.

O’Reilly commented that AB40 , AB70, ZG75 are popular machines with a 6 or 7 ft drum mower while the ZG100 has an 8 ft disc cut. Having the correct machine for the individual farm is crucial to making the whole concept work.

He said: “Too big will result in not being capable of cutting when you want, while too small could result in taking too much time with increased number of loads. Having a range of 14 machines allows the farmer select what suits his farm best.”

O’Reilly noted that the response has been great. He said: “Farmers are delighted with what the machine can do, early and late zero grazed grass can mean thousands of euros in meal bills.”

Approximately 90% of his customers are dairy farmers where grass quality and meal usage means the difference between a good or a bad year, while a number of suckler and beef finishers are cutting meal bills in half.

The biggest challenge to any livestock farmer is to manage grass that will result in better quality silage for winter feeding and reduced meal feeding. Zero Grazer has a massive part to play in achieving this.

Northern Ireland dairy farmer: “Kg’s of solids /ha on this farm is over twice the N.Ireland average. There is no doubt Zero Grazer has achieved this by better grassland management and increased intakes of grass to our cows. The ZG100 is a top class machine”

Connacht suckler farmer: “Cows and calves had recked this farm with the bad weather in 2012 and 2013. Since purchasing Zero Grazer AB70 the farm has been given a chance to recover. We can house animals and still feed grass, if wet weather is causing animlas to poach ground. We extened our grazing by 8 weeks simply by housing animals earlier in the season. Like it or not Zero Grazer will change how we manage/use grass in this country ”

Munster Dairy farmer: “We are now entering the 9th season using a AB70. Its the last thing that we would let of of the yard. Simply, it has saved us a fortune. Zero Grazer are at the top of there game. ”

Connacht Dairy farmer: “We purchased the AB40 late season but had the chance to make our 45 acres of after grass available a mile away. We didnt waste a blade of it and cows still grazed by day until 17th Dec. Unheard of in these parts. Had big increase in protein and milk yield. Our aim is to use it early and late in the year, when cows would damage ground. Zero Grazer are a class apart, we cant think highly enough of them ”

Leinster Dairy farmer: “We are a 100% winter calving herd which would mean cows tend to eat less grass on this system, but not so. With the ZG100 from Zero Grazer we are achieving 300 days of grass. All leading to increased profits. Spring calving herds would struggle to do 300 days grass.”