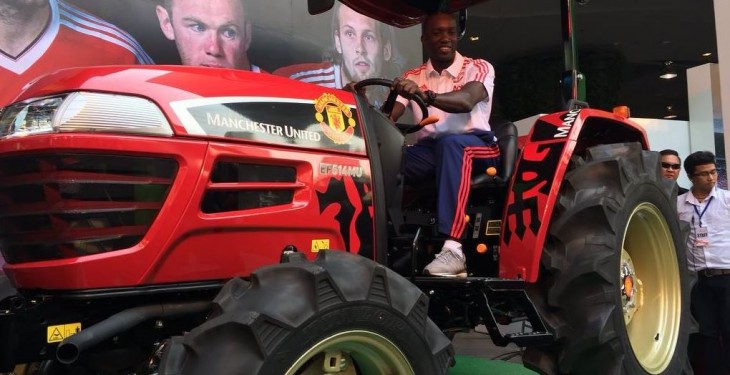 No this is not an early April Fool’s Day joke. Manchester United now has a tractor with its logo on it!

Man United has teamed up with tractor manufacturer Yanmar to create a limited edition of tractors bearing the logo of the soccer club.

The 51hp output EF514MU tractor models are available on the Thai market as of today, March 3 and were launched in Bangkok with the help of soccer player Dwight York.

The tractor line will be complete with Man United-logoed stickers, wheel caps and floor mats, which Yanmar says ‘confer a sense of style, distinguishing the limited edition from the mass produced models’.

Unique design elements include the use of the Yanmar premium red on the tractor body and the wheels feature premium gold tones.

On the more technical side of things, the tractors are installed with Yanmar’s own direct injection diesel engines.

This allows the them to achieve high fuel efficiency and power output in a variety of operation conditions.

There’s nine different speed ranges for forward and reverse operation on the models. Furthermore, a variety of attachments can be utilised to meet the various requirements of field work.

Yanmar has made constant efforts to promote soccer and even established its own team in 1957. It has been an official global partner of Manchester United since 2012.

With a view to expanding its business in southeast Asia, Yanmar is working to raise brand awareness through sports communication and share the passion and spirit of challenge that football inspires with enthusiastic fans in the region.

Its ties also include sponsorship of the AFC Champions League and several other national teams and clubs while in Thailand the company is an official top partner of Bangkok Glass, a premier league team there.