Why sustainability means ‘profit’ to one Tipperary dairy farmer

Operating a grass-based system, he follows a very simple philosophy, saying: “Every farmer needs to work out his own system. If you can’t explain that system in less than five minutes, it’s too complicated and I don’t have time for complications.”

Key to Breen’s business is a focus on two things – grass and stock management.

“We held the cows back for a number of years because we were so restricted with quotas. But, then at one stage, we almost doubled our cow numbers.” 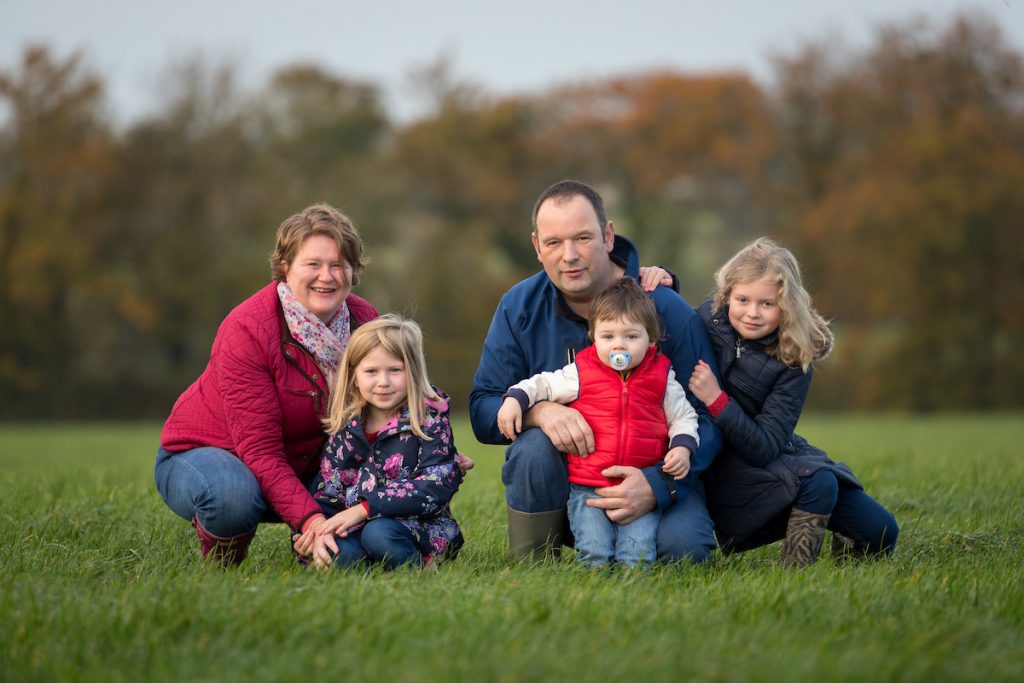 The Breen family pictured on the family’s farm in Emly, west Tipperary

Recovering costs is very important to the Tipperary-based farmer, adding: “I need my business to be highly efficient and sustainability means profit to me.

It just so happens that the more sustainable you are, the more profitable your enterprise becomes. There’s nothing new in it; being sustainable is something we’ve always done.

Breen is just one of the many farmers who are certified members of Bord Bia’s Sustainable Dairy Assurance Scheme (SDAS). SDAS farmers who participate in a farm sustainability survey, as part of their audit, are members of Origin Green.

SDAS, and the carbon navigator, allows Origin Green farmers to measure and benchmark their sustainability practices; helping them to identify efficiencies which they can improve on their own farms. Focusing on such efficiencies can also allow these farmers to improve profitability.

According to Breen, participating in SDAS highlighted not only what they were doing right, but also where they needed to up their game.

“An example of this was when we scored poorly on slurry use. This is due to the fact that we spread very little slurry in the spring.

“It can often be difficult to spread slurry here due to the soil type. But, with a renewed focus, we have managed to increase its use in recent years.”

Generating a profit from milk production

When asked what it takes to generate a profit from milk production, he said: “It’s important to be absolutely clear on your system and what’s the driver of profit in that system.” 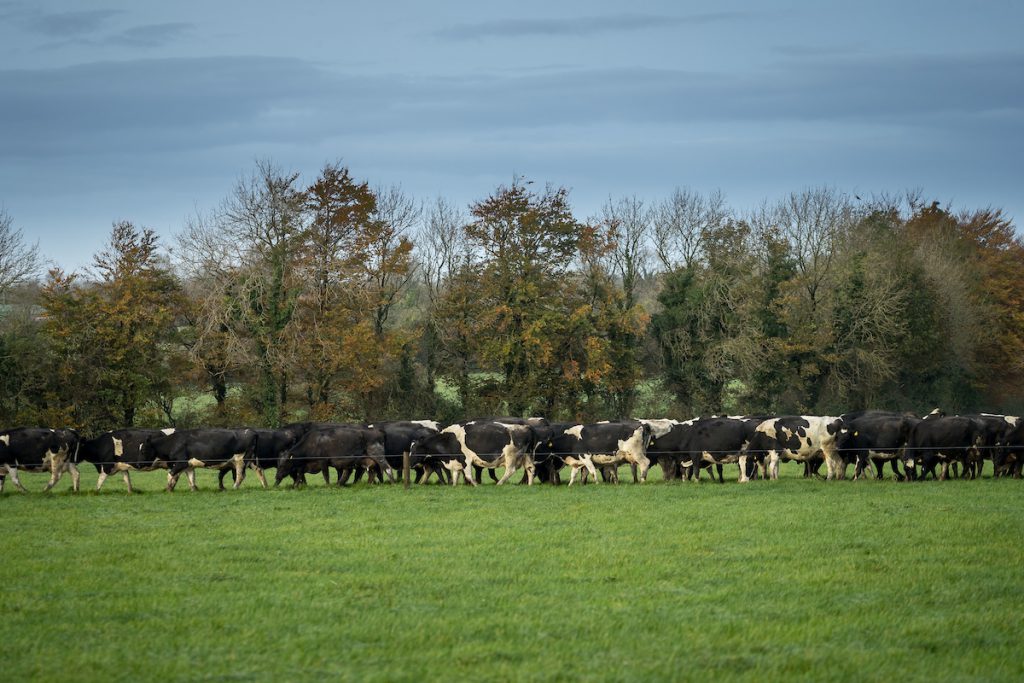 Breen’s system rotates around grass and stock management. These two focus areas can be further broken down to include: grass measurement; calving at the right time of year; strategic feeding; and selecting the right cow.

The Tipperary-based farmer measures grass on his farm every week. This practice allows him to know what quantity of feed is available on the farm at all times.

It means he can plan ahead and ensure that he has the correct quantity and quality of grass as the seasons progress. The farm typically grows 15-16t/ha (dry matter) each year and this figure guides the stocking rate on the farm, thus limiting the need to buy in extra feed. 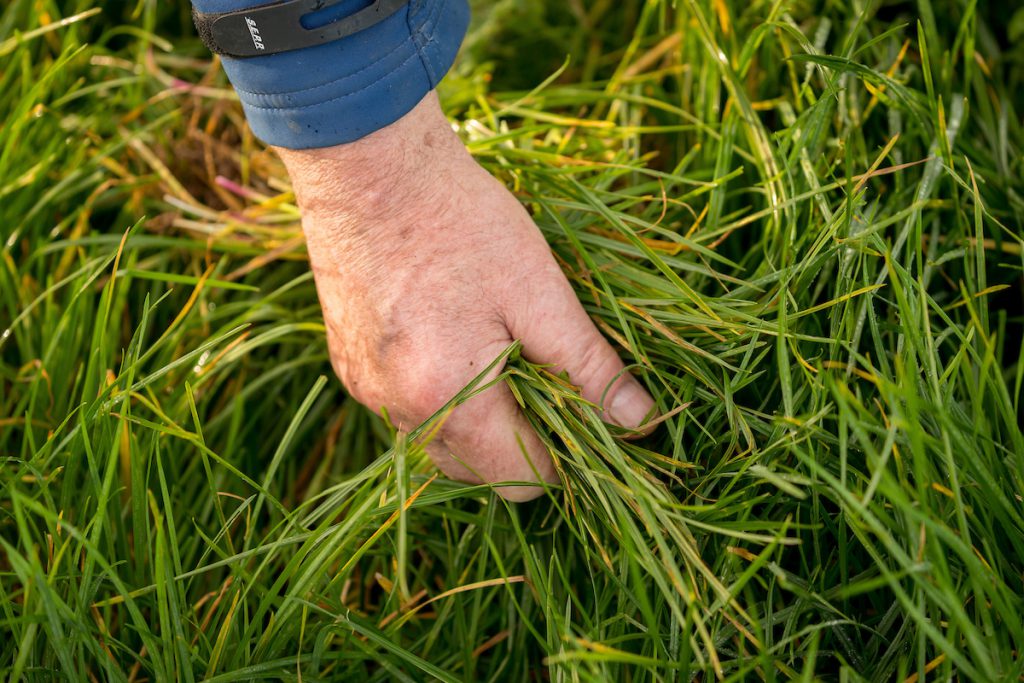 Calving at the right time

The breeding policy on the farm is based on grass production. Breen wants his cows calving close to the time when grass begins to grow rapidly. This maximises production from grazed grass – by far the most profitable feedstuff.

If most of the herd calve within a compact period of six weeks, that gives cows a long lactation and a better chance to go back in calf. It also provides an opportunity to utilise a lot of grass early in the grazing season.

When a cow calves late, Breen only milks them once-a-day to conserve their energy and hold body condition. That way he can get them back in calf quicker.

Breen’s cows are fed grass as much as possible. Depending on the weather, they graze from February to mid-November.

During heavy rainfall, Breen uses the on-off grazing method to reduce damage to soil and prevent his cows from ‘wrecking the paddock’. He also questions the economics of very high stocking rates, which rely on drawing silage/grass from other farms or large amounts of bought-in feeds.

He believes that this may overload the milking platform with slurry; not to mention the extra work load often involved in this.

When it comes to feeding, Breen follows a philosophy of John Roche – a New Zealand dairy consultant – who spoke at the Irish Grassland Association Dairy Conference three years ago.

On feeding, Roche said: “Be careful that you’re turning milk into money and not money into milk.”

Breen believes that selecting the right breed of cow is critical to any system. Farmers often mention that they want a grass cow, but what Breen often sees on farms is not what is required to graze grass in his opinion.

He has a herd of Jersey/Friesian crossbreds on his farm and is very pleased with their performance within the system. Breeding focuses on milk solids – and protein in particular – because that’s what he gets paid for. 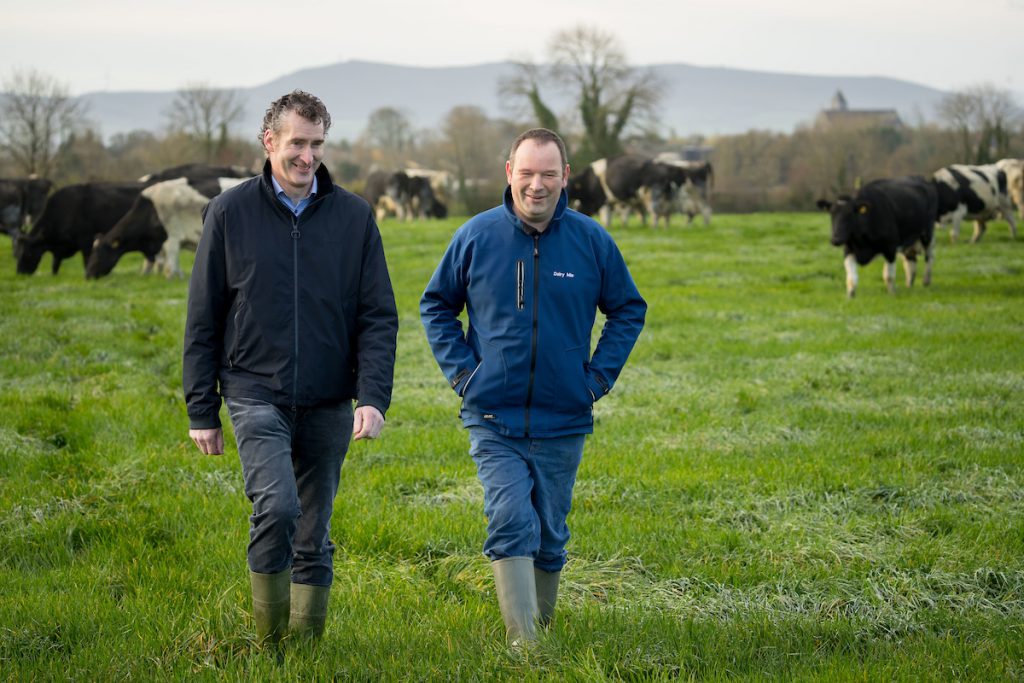 As one of the 400 suppliers to Tipperary Co-op – an exporter of: butter; milk powder; baby powder; and Emmental and Kilderry Cheese – Breen believes Origin Green is a vital marketing tool.

We have to have something different to everyone else and Origin Green is a way of doing that.

Breen is part of a dairy discussion group (Dairymis) of about 20 farmers, which also provides him with invaluable support and insight.

“It’s a great way to benchmark your performance. We compare everything from productivity, production costs, labour efficiencies, grass production, fertility and more.

“They are a critical group; but it is always in a constructive way,” he said.

For the last number of years, Breen and his wife Carol have worked in partnership with his parents – Peter and Sheila. This year, Breen’s parents made the decision to pass the remainder of the milking platform over to them.

I’ve taken the basics that I learned from my parents and I’ve added my own experience, research and ambition and moulded it into the farm we have now.

The Tipperary-based farmer has the benefit of having spent time working on farms in New Zealand, as well as a stint on a farm in France as part of his course – returning home in 1997.

“There wasn’t enough at home to make a living; so I worked at everything from farm relief, welding, working on neighbouring farms and as an AI technician with Eurogene AI Services for 15 years.”

It was around that time that Breen joined the Sologhead Macra Club. This was where he met Carol – the daughter of former IFA deputy president, Michael Slattery – who was a member of the Clonoulty/Rossmore Club.

They married in 2007. Two years later, they built a home back on the family farm in Emly, where they now live with their three children – Julia (seven), Sarah (six) and Peter (18 months).

Breen is certainly someone who soaks up information on how to improve efficiencies on his farm. The farm needs to generate a large profit and he’s making a good fist of it. He makes no apologies for the fact that he has a family to support and a business to run.

“It’s all about measurement and analysis now. You need to know your figures and you need to accept that when it comes to dairy cows – it’s not a sprint, it’s a marathon.”