Why are EU fertiliser prices still high in spite of 50% cheaper oil?

Fertiliser prices increased slightly in December and January by respectively 0.4% and 2.2% on a year to year basis, according to the European Commission while at the same time Brent oil prices continued to decline and are now 50% lower than in June 2014.

According to the European Commission this is mostly explained by the fact that the EU price for nitrogen fertilisers is mainly linked to natural gas, with a time lag of several months (4 to 8) depending on the contract.

Coupled with this EU natural gas prices did not follow oil price developments. 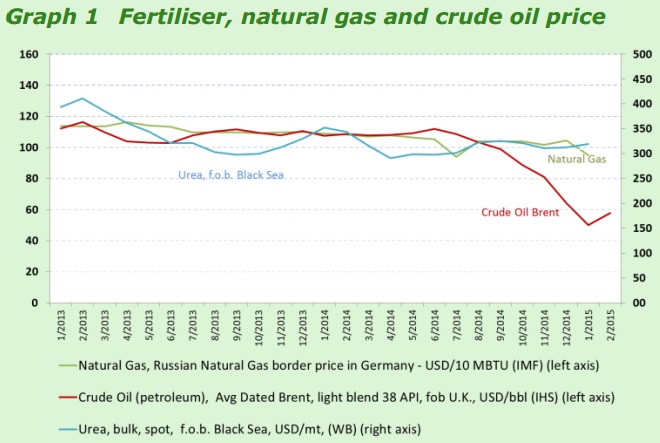 The Commisson says the natural gas used to produce nitrogenous fertilisers in the EU is mainly imported from Russia (32%), Norway (31%) and Algeria (13%).

It says that it must be noted that the price of EU imported natural gas is three times higher than the US shale-gas price.

According to the Commission, the EU imports around 20% of its nitrogen fertilisers.

In its latest update on the market, the IFA says purchasing groups and volume buyers are achieving deals that are below the official quotes for fertiliser this season.

Many groups, it says are buying at prices that are significantly less than those on offer to smaller co-ops and merchants.

The IFA says it is critical farmers shop around as the larger players are keen to take good business despite the upward pressure on prices from manufacturers and distributors.

It says they are offering extended credit terms at cash or near cash prices to secure volume orders.

According to the IFA strong resistance by farmers to price increases so far have paid off.