Wet few days in store with risk of localised flooding

Heavy downpours tonight will signal the start of a wet few days this week, with localised flooding expected, according to Met Éireann.

The national meteorological office noted that conditions will remain unsettled through midweek but should become more settled for the end of the week with mainly dry conditions and sunny spells.

Today will be dry and bright for much of the country with long spells of sunshine. However, isolated showers will continue in Munster and Connacht.

Highest temperatures will reach 9° to 12° in moderate southerly winds, increasing fresh to strong through the evening, the forecaster says.

Tonight will be a very wet and windy night, according to Met Éireann. Rain will develop in the west and southwest early on, becoming widespread overnight.

There will be heavy downpours, particularly in the southwest, with a risk of localised flooding.

It will turn increasingly windy overnight also, with strong to near gale force southeast to south winds, reaching gale force on coasts, it was added.

Lowest temperatures of 5° to 8° are expected, though it will become milder overnight.

Tomorrow will remain wet and windy as further spells of heavy rain spread northwards across the country with a continued risk of localised flooding.

Strong and gusty southerly winds will reach near gale to gale force on coasts, the forecaster warns. A mild day is given, with highest temperatures of 11° to 14°.

Heavy rain will persist early on Tuesday night, particularly in the east and south. However, rain will gradually become lighter and patchier overnight, with dry spells developing in the west and north.

It will stay breezy with fresh southerly winds, strong on western coasts. The night will be mild with lowest temperatures of 8° to 10°.

It will remain wet in the east and south on Wednesday as rain continues through much of the day before gradually clearing during the evening.

However, there will be dry spells in the north and west with scattered showers. Highest temperatures of 8° to 11° are given in moderate to fresh southerly winds.

Showers will persist in the west early on Wednesday night while elsewhere will be largely dry with long clear spells. Lowest temperatures will drop to 3° to 6° in a light to moderate southwest breeze.

A bright and mainly dry day is given for Thursday with a mix of sunny spells and scattered showers. Highest temperatures of 9° to 11° are expected in a light to moderate westerly breeze, Met Éireann concludes. 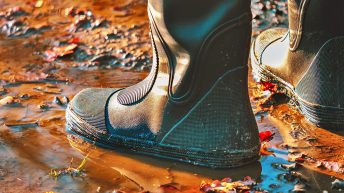 Status Yellow: Met Éireann warns of up to 50mm of rainfall