A number of the country’s farm lobby groups stood side-by-side with the Beef Plan Movement at a major rural-led protest outside Leinster House in the capital today, Wednesday, July 10.

The purpose of the protest was to highlight the “grave concerns” that rural and farming communities have about the future of the family-farm model – particularly in light of political agreement being reaching on a proposed EU-Mercosur trade deal.

One of the first speakers was Beef Plan representative in Co. Westmeath, David Whelehan, who described the rally as “a protest of unity”. 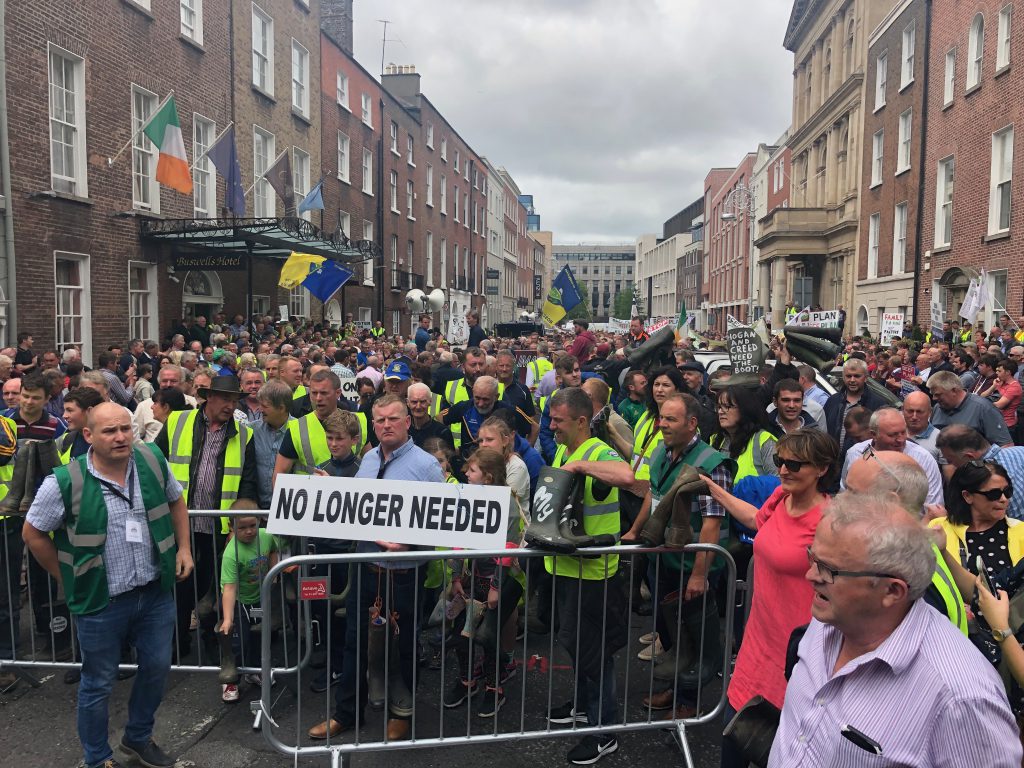 Hugh Doyle, co-chairman of the movement, addressed the crowd to say: “50 years ago, nearly to the day, the National Farmers’ Union set off on a 210-mile walk for farmers’ rights.

“We see ourselves back here today fighting for the same rights.”

Doyle added that the principles the EU was set up under was “transparency and looking out for the small guy”.

What’s happening now is they are potentially going to do a deal with a country that is cutting down 200,000ac of forestry per day. That’s the equivalent of the acreage of Dublin per day.

“You have people that told you they signed up to the Paris agreement. My father always told me that you judge a person by their actions not by their words,” he said.

The newly elected president of the ICSA, Edmond Phelan, said:  “Three years ago our organisation stood here protesting against Mercosur; it was a bad deal that day and it is a bad deal today.

“The Taoiseach, Leo Varadkar, would want to stand up for us or else stand down and if any supermarket thinks they’re going to sell Brazilian beef, we’ll close them down.

“Mercosur has nothing to do with beef, it’s all about selling German cars. We’re not going to lie down and let it happen,” he said.

The president of the ICMSA, Pat McCormack, also spoke at the event. He said: “It’s a long time since we’ve seen such a large protest that’s representative of rural Ireland.

“We can’t make a margin because our beef industry is monopolised. There’s a dictatorship in our industry and we have to fight against that,” he concluded.