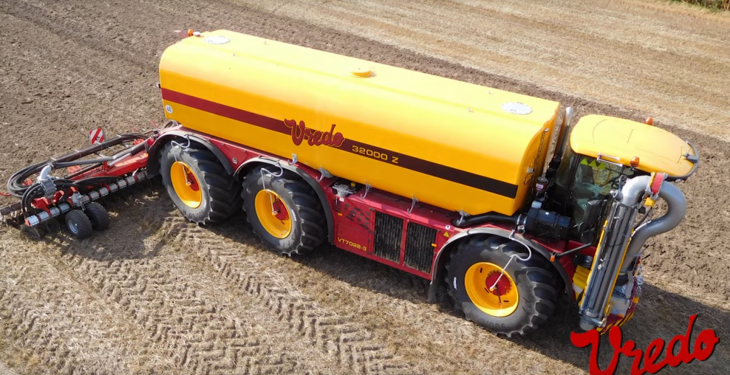 Dutch machinery manufacturer Vredo has developed what it says is the world’s largest and most powerful self-propelled slurry machine – the VT7028-3 SlurryTrac.

The VT7028-3 is designed as a “modular machine” – as a two or three-axle multi-functional rig with a “huge” weight-carrying capacity on its long chassis. The two-axle version is generally fitted with a “light-weight” polyester slurry tank, with a capacity of 21,000L.

Advertisement
The pump has a capacity of 12,000L/min, so it takes almost three minutes to fill the big 32,000L tank. A chopper (or slicing filter) is fitted in front of the pump, to avoid messy and awkward blockages.

What sort of transmission does this beast have? According to Vredo, its recently-developed VVT700 continuous variable transmission (CVT) was designed “for maximum tractive effort, stepless speed adjustment and the lowest possible fuel consumption”.

Extra options available from Vredo include a Trimble GPS RTK (Real-Time Kinematic) steering system, a turbo-filler with a 10in-diameter arm and a tyre pressure adjustment system – for switching between road and field use.

When slurry spreading is over, a transport body can be mounted on the back – for hauling, for example, grain or potatoes. Also, an optional front 3-point linkage enables the vehicle to be used with a blade – to push up maize silage or to even be used as a dozer or compacter.

Vredo launched the VT7028 at the ATH (Agro Techniek Holland) farm machinery show in the Netherlands last year. Prices reportedly start from about €600,000. 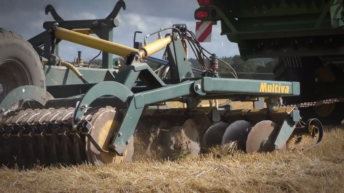 Video: Pulling a set of discs…with your combine