The growing public frustration over illegal wild fires is being underestimated by politicians, according to the Irish Wildlife Trust (IWT).

People affected by wild fires are being urged by the IWT to contact their local politicians to express their frustration at inaction over these illegal fires.

Since the start of 2017, the IWT has documented 57 fires across Ireland; 26 of these have reportedly occurred in areas designated for nature conservation, including Killarney and Wicklow Mountains National Parks.

The organisation claims to be dealing with people in counties affected by illegal fires on close to a daily basis. These people are believed to be ‘disgusted’ at this practice ‘destroying the local environment and putting lives at risk’.

One resident from Co. Cork contacted the IWT to detail the stress that these fires can cause.

Last year was a nightmare. The fires lasted for about two or three weeks. My house was in danger. Three fire engines were around from 11pm until 5am before they had it under control and we could all go to bed.

Annual wild fires have already eradicated much wildlife from swathes of our hills, challenging the idea that Ireland is ‘green’ and environmentally-friendly, according to IWT Campaigns Officer Padraic Fogarty.

“Politicians have yet to wake up to the anger and frustration of local people who have to endure this torment every year.

“It’s important therefore that people contact their representatives to make their feelings known,” he said.

Following the gorse fires in the Gougane Barra area on the border of counties Kerry and Cork, firefighters in Co. Cork were dealing with another blaze in the Sheep’s Head area in south Co. Cork recently. 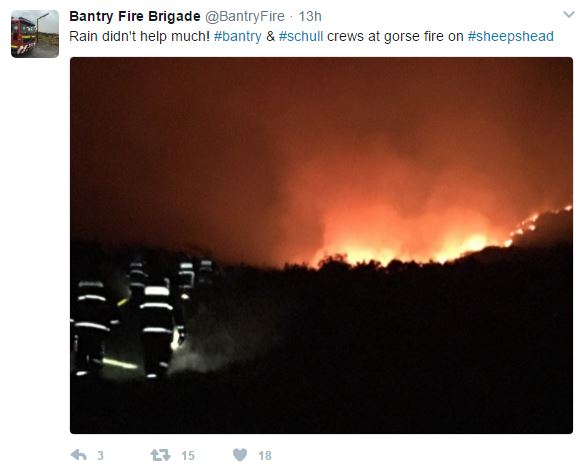 Meanwhile, the IFA’s Hill Chairman, Pat Dunne, has called for vigilance in light of recent gorse fires and the dry conditions on hills at present.

After a spell of dry weather, a wildfire risk can develop quickly in areas where flammable vegetation such as grasses, gorse and heather are present, Dunne said.

The Hill Chairman also added that gorse burning is not permitted and should not be carried out at this time of year.

“Managed burning of gorse is good land management practice as it allows the regeneration of mountain land.

However, burning should not be carried out at the moment as it is outside the burning dates and not beneficial for land management.

The existing burning dates from September 1 to the end of February are too narrow; the inclusion of the month of March, as per the Heritage Bill, would allow for better vegetative management and reduce the risk of wild fires, Dunne said.