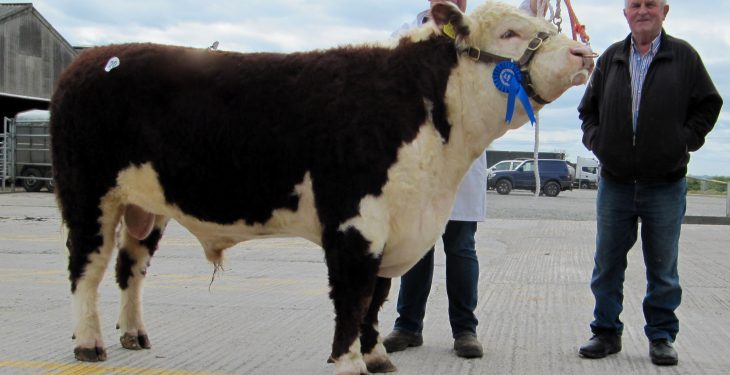 The prices were slightly down on those achieved at the Spring Show and Sale held in Nenagh on April 8.

There was a price range of €2,000 up to €3,550. The top price went to Eamon McKiernan, originally from Co. Cavan, for his five-star Terminal bull Knockmountagh Fionn, who is from Ireland’s easiest calving Hereford sire Cill Cormaic Kasper.

Joe Kett bought the bull following a successful bidding war with a fellow spectator for the figure of €3,550.

The joint-second highest price of €3,200 went to both Declan Donnelly from Ennis and Ted O’Sullivan from Fermoy for their bulls Clondrina 1171st and Furaleigh Kobe 1049 respectively.

There were also joint recipients for the third-highest price of the day. Both Padraig McGrath and Dermot Whelton each made €3,000 for their bulls Kye Gerard 727 (1st place class 3) and Hazel Grove Braxton (2nd place class 3) respectively.

Another high-priced bull at the event was Basil Arnold’s Mullaghdoo Arthur, which sold for €2,800.

The Irish Hereford Breed Society announced that it would like to wish all purchasers the best of luck with their new bulls, and hope that they serve them well.

The next Hereford sale will be held in Nenagh on Saturday, May 20. 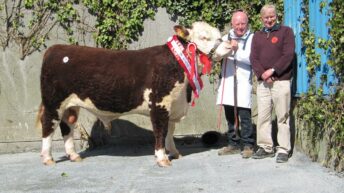 Pics: Buyers dig in deep at Hereford Show and Sale