Video: This Laois farmer hit the headlines over the weekend

A Laois farmer’s dance moves hit the headlines over the weekend after he was filmed by his cousin throwing shapes on the side of the road.

John Lawless is the Laois farmer in question and the video of him dancing to Omi’s Cheerleader was sent into Joe.ie by his cousin George Lanham.

Speaking to Joe.ie, George said that his cousin is a big farmer. “He was driving down the road yesterday and he had to get out at the side of the road to dance to this song.

“We are all still laughing at it. It’s brilliant,” he said.

He wasn’t the only Laois social media celebrity over the weekend.

One soccer team’s manager sent out a somewhat unusual text message to his players. Odhrán Byrne sent in the image to Joe.ie saying the picture came from his soccer manager the night before a big quarter-final cup game.

“Bear in mind we are a division three side called Ballacolla FC hailing from the heart of Laois, so the message is understandable to us. Ironically, our team nickname is The Ballacolla Bulls,” he told Joe.ie.

This is the text players on the team received: 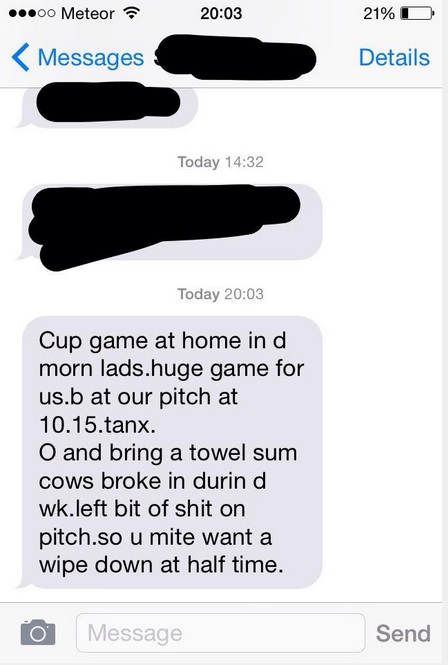 Credit: The video and image are from Joe.ie.