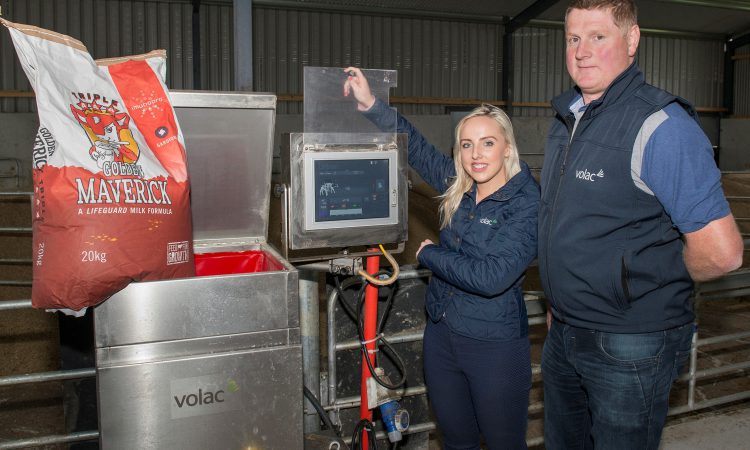 “The feeder has simplified the entire calf-rearing system. It has greatly reduced the labour load. Calves are certainly healthier and are very content at weaning,” said Gerard, who – with his wife Niamh – milks a herd of 175 cows and rears all progeny to beef at Kylebeg, Kilbarron, about 10 miles north of Nenagh.

All male calves are finished on the farm as bull beef. The early-born bulls are finished under-16 months and the rest at 20-22 months.

However, unhappy with the returns from bull beef this year, he is now seriously evaluating his policy for the future.

Heifers not needed as replacements are finished at 20-22 months. There are 36 in-calf heifers destined to join the high-performing herd next January.

They have three children – Alan, Alice and Katie. The Volac Urban Alma Pro feeder was installed last February ahead of the calving season.

Prior to that, he used teat bars which involved a heavy labour load. Gerard is using four feed stations – each can feed 30 calves.

Calves are fed colostrum for the first three days and are then moved onto the feeder and fed milk replacer; they are kept on the feeder for 70 days.

“We had no difficulty in training calves to suck on the feeder. After assisting with the first suck, any calves that haven’t drank by themselves in the following 24 hours are assisted in the feed station again.

“Out of every 30 calves, we might have to put in at most two for their second feed and after that they all go in freely.

“For a calf that is a bit behind the others in performance, you have the option to keep it on the feeder so it has a chance to catch up. I also found it great from both a labour and management aspect for calves born late in the season.

But to me, the outstanding advantage is calf performance and the smoothness of weaning.

“The gradual reduction in milk levels in the weeks leading up to weaning encourages increased meal intake.

“Our calves were eating between 1.5kg and 2kg of calf ration/day when they were weaned. We had contented calves; there was no roaring and no setbacks after weaning,” Gerard explained.

In the video below, Volac business manager Sharon O’Donoghue explains the features of an Urban Alma Pro feeder at the 2019 National Ploughing Championships.

Unhappy with the returns from his suckler-to-beef enterprise, he started contract-rearing replacement heifers six years ago.

Padraig is now rearing 200 heifers for two dairy farmers. There are 400 animals on the farm at any one time. He installed a Volac Forster Technik computerised feeder last winter and, with one season behind him, is very happy with the results.

A big reduction in labour and the ability to continually monitor each calf’s drinking behaviour, leading to early treatment of any calf showing signs of sickness, are among the advantages he listed. The resulting improvement in calf health has led to the massive saving in veterinary costs.

The availability of a weighing scales as an optional extra was one of the reasons why Padraic chose the Forster Technik feeder.

The scales enables the performance of each calf to be monitored daily, which he regards as a big benefit to management and in achieving target weights at weaning.

Calves arrive on the Carpenter farm at around two weeks-of-age, at weights of 35kg to 40kg. They are put on the feeder and penned in groups of 30 with access to a feed station.

As with the Urban feeder, the Forster Technik can handle 120 calves at four feed stations. Padraic is using Volac Heiferlac, the milk replacer tailor-made for high performing replacement heifers; it contains 26% protein, 16% oil and 7% ash. 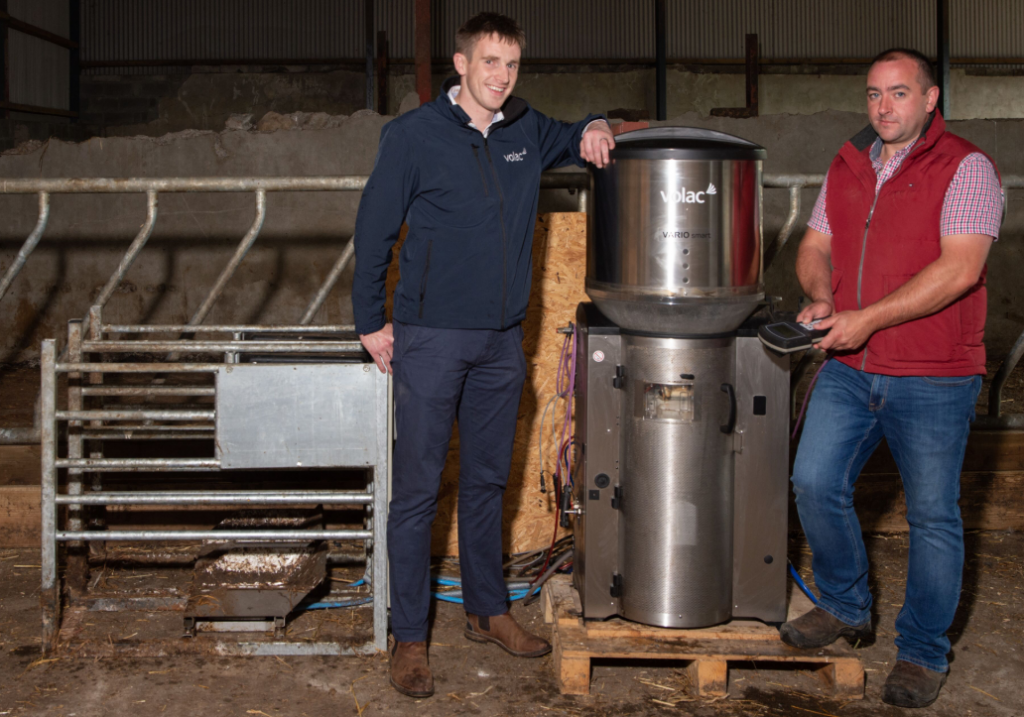 The very high levels of pure protein, lactose and a specially selected blend of vegetable oils in Heiferlac help deliver the rapid frame growth in the early weeks of the calf’s life, thereby setting the platform to achieve critical target weight and size at mating at 15 months and calving at 24 months.

Heiferlac is designed to deliver a growth rate of 0.9kg/day when mixed at 150g/L and fed in conjunction with ad-lib concentrates, quality roughage and fresh water.

Calves in the Carpenter rearing unit are programmed to receive 6L/day of Heiferlac, mixed at 150g/L.

The concentration of the milk replacer remains the same – at 150g/L. Calves have ad-lib access to concentrates, straw and water at all times. They are fed a calf ration until they hit 50kg and are then put onto a calf nut until six months old.

Tomas O’Reilly (pictured above) has joined Volac as business manager in the north-east region.

In this role, he will be responsible for providing advice to farmers and agribusiness on the company’s range of calf and lamb milk replacers, animal nutrition products, calf and lamb feeders and forage additives and packaging products.

He comes from a family farm at Killeshandra, Co. Cavan, where he lives with his wife Louise. He is actively involved with his father Michael in the farm business, which specialises in producing calved and in-calf continental heifers for sale.