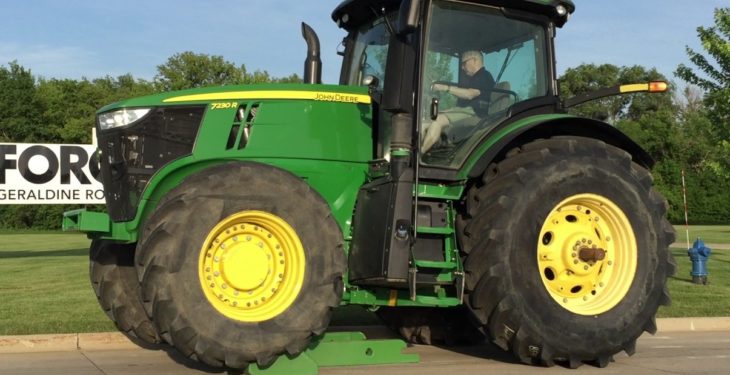 Last week played host to the significant Cereals 2017 event in the UK.

Located in Lincolnshire, the event took place over two days – June 14 and 15 – and a significant number of Irish tillage and machinery enthusiasts made the trek over the pond to see what was new or eye-catching.

As well as a plethora of cultivation and drilling equipment, there were also some unusual items.

Among these was a weight block (ballast) system for John Deere 7R Series tractors. The system enables ‘add-on ballast’ to be attached to the tractor’s chassis rails – providing a near 50/50 weight distribution in the process.

Aimed at those who need to ballast up their high-horsepower tillage tractors, to boost traction, the system has been described as a “quick-fit underbelly weight”.

Dubbed ‘EZ Ballast’, the system is manufactured by Laforge; the weight is lifted on and off the tractor hydraulically.

In practice, the driver manoeuvres the tractor over the weight whereby a hydraulic arm can pick it up. The driver can then activate a control, causing the weight to be lifted up flush with the tractor’s chassis. It is subsequently locked in place, courtesy of hydraulic pins. This all happens within one minute.

Dropping the weight off, says John Deere and Laforge, is an equally-simple process. Again, it all takes place without the operator having to leave the seat.

The lifting frame, onto which the hydraulic arm is attached, remains on the tractor’s chassis, whether or not the weight is in use.

EZ Ballast does impact on ground clearance – but less than what you might think. Underbelly clearance, with the weight in place, is reduced by only 2.5cm.

The system, including the mounting frame and ballast weight, lists at a portly price in the UK of almost £11,000. 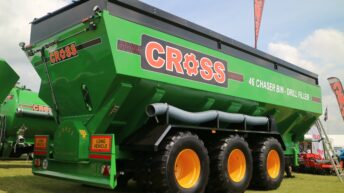