The proposed method from the Department of Agriculture, Food and the Marine for enlisting additional vets to work at customs check points in the event of a hard Brexit has been criticised by the new president of Veterinary Ireland.

Conor Geraghty, who took over as the organisation’s president at its 2019 AGM and Conference on Friday, November 22, said that using temporary veterinary inspectors (TVIs) on a part time basis for this purpose would be preferable to taking on veterinary practitioners for longer periods, which would take them away from ordinary practice.

Although the threat of a hard Brexit has been pushed further our by the most recent EU-granted extension, it could raise its head again, depending on the results of the forthcoming general election in the UK next month.

Speaking to AgriLand at the Veterinary Ireland AGM on Friday, Geraghty explained: “There’s two types of people who would work in those situations. One is permanent department staff… Then there will be people from practice, who would be doing in on a part-time basis.”

However, he explained that, on this occasion, the department wanted to tender out for longer shifts then normal.

“So, if you go back to foot and mouth for example, the TVIs, who do the meat inspections in the factories, would have aided at the border during foot and mouth, and it worked very well. Basically, they would go up there and do one shift a day or two shifts a day, and help their department colleagues do that work,” Geraghty outlined.

However, he added: “This time, for some reason, the department decided to do it differently. It wanted to put it out to tender basically, and have longer shifts, which would take people out of practice, which we don’t want, because we’re having it hard enough to fill our rotas.

It’s hard to attract people into rural veterinary practice at the moment, so we’d much prefer if they go for shorter shifts, and we’d be available to the farmers and agri-food sector in practice to service them, and then go for four hours a day, do that [customs work] and come back.

“What the department is proposing basically would exclude that…it would take them out of the system,” Geraghty argued.

He said that Veterinary Ireland has made it known to the department that “if you want this work, it’s either through full time veterinary staff [with the department], or through the TVI system”.

Geraghty highlighted the advantages of the TVI system, referring to it as “very mobile”.

“People are there, you don’t have to pay them if you don’t use them, and if I was in the department, that’s what I’d be looking at, to make sure the TVIs were available, trained, and ready to go,” he suggested. 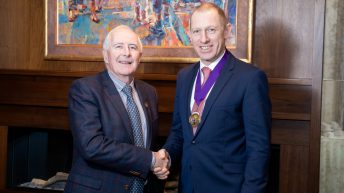