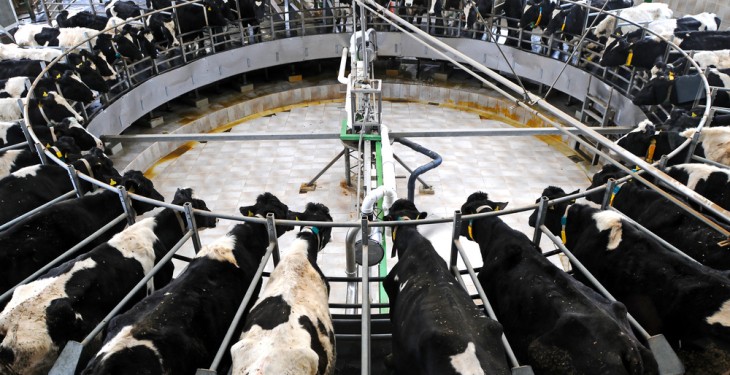 Dairy farmers in the UK could hit the picket lines next week over poor milk prices.

FFA member Paul Rowbottom told the Shropshire Star that the protests will take place without warning at sites in the county.

Milk prices in the UK have fallen significantly in the last 12 months. According to the most recent DEFRA figures, the average UK farmgate price stood at 24.59p/L in April. This was a 0.38p/L (1.5%) decrease on the March average price.

In 2014 the FFA organised a number of protests outside key milk processing and distribution centres in the UK. One protest of significance to Ireland took place late last year at an Irish Dairy Board-owned company Adam’s Food plant in Leek, Staffordshire – over what the FFA say were ‘cheap’ imports of cheese being brought in from Ireland.

According to the protesters at the time, the IDB is bringing in cheaper cheese from Ireland and undercutting UK operators.

David Handley, Chairman of the Farmers for Action group said competition is good for everyone, but when it becomes an undercutting situation is not good. “When our milk prices are collapasing at such a rapid rate we believe there is a moral issue at stake.

“We met with Adams Food 18 months ago about this and their labelling of Pilgrims’ Choice. It says the product could be from the UK, Ireland, New Zealand and Australia. The consumer should have genuine country of origin labelling.

“We have a big problem when we have to comply with the British Red Tractor guidelines but then we are undercut by cheese like this. We have to jump through hoops to produce our milk and it costs us and then we are undermined by someone taking advantage of the labelling laws,” he said.