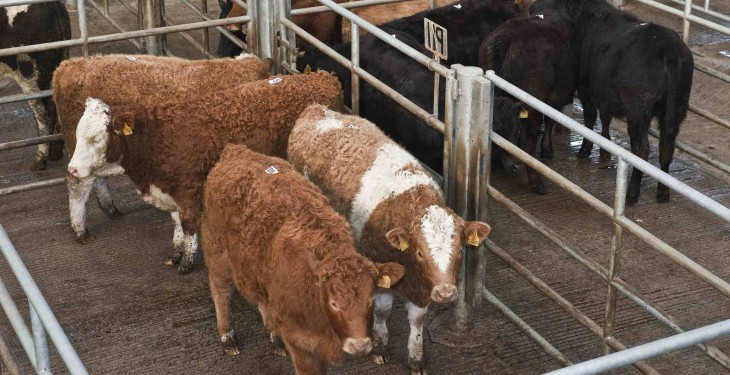 Much like here in Ireland store cattle values in England and Wales have been remarkably firm in the first few months of this year, given the evolution of the finished trade in the regions, according to ADHB.

An beef and sheep industry body in the UK the ADHB says while average values have drifted down modestly since the turn of the year, the substantial drop in the prime trade does not seem to have translated into lower prices being paid for store animals compared with last year.

It says since the turn of the year the average value of two-year-old dairy-bred male cattle store animals of this age have eased to the greatest extent.

According to the ADHB these animals will have been under the most price pressure and will likely to have been picking up more penalties for being out of spec.

In May, the average value of two-year-old dairy-bred steers was down 12% since January.

Looking at Hereford beef animals in the same age category, the ADHB says prices during May were down just 6% over the same period.

It says while beef-bred animal prices across the board have held up the better, performance of native cattle categories indicate that the demand for this product has been more robust.

Looking in the 18-month-old age category, again native beef-bred values have held up better, with them outperforming the continental category, according to the ADHB.

The May continental steer average has fallen 11% since January, while Herefords are back just 7%.

It says these trends continue to be only a modest reflection of the pressure that finished prices have been under this year and in all categories, as with older store cattle, prices are well ahead of year earlier levels.

In May, Hereford and continental 18-month old steers were trading well over £50 per head up on the year, while dairy steers were over £100 per head dearer. However, this is probably a reflection of the even tougher finished market for these types last year.

Looking at store animals in the yearling category the ADHB says there are some real signs of buoyancy, particularly for dairy bred and Hereford cattle, with the average yearling steer price in May up 3% and 6% respectively since January.

It says the generally better performance for dairy bred yearling cattle has possibly been led by tighter supplies.

British Cattle Movement Service (BCMS) population data indicates that the number of younger dairy male cattle on the ground this year is notably lower than it was a year ago.

Additionally, the ADHB says there might be some optimism amongst finishers that these cattle will be entering the market at a time when the trade has improved as supplies tighten both in the UK and Ireland.