There has been a lot of talk in recent years about finding another use for wool, and in Co. Kildare, Peter McGlynn and his son Peter believe they have found the solution.

The sad decline in the value of wool has been well documented, with wool prices hitting a new low in 2020. Wool merchants were quoting 20-25c/kg at best for good-quality wool, with poorer quality scotch wool being valued at a mere 5c/kg and in some cases not even worth anything.

Wool prices have been on the decline for a long time now and the days of breaking even are gone, with many farmers out of pocket when it comes to carrying out the necessary task of shearing their sheep.

Speaking to AgriLand about his relatively new venture, Peter said: “We started making pellets to densify biomass materials and to take residues and turn them into reusable fertilisers.

“Our priority is wool, it has had a low market value for quite a long time now and we’re looking at pelletising it to be used as an organic fertiliser as well as a slug repellent and weed suppressant for both domestic and agricultural use.” 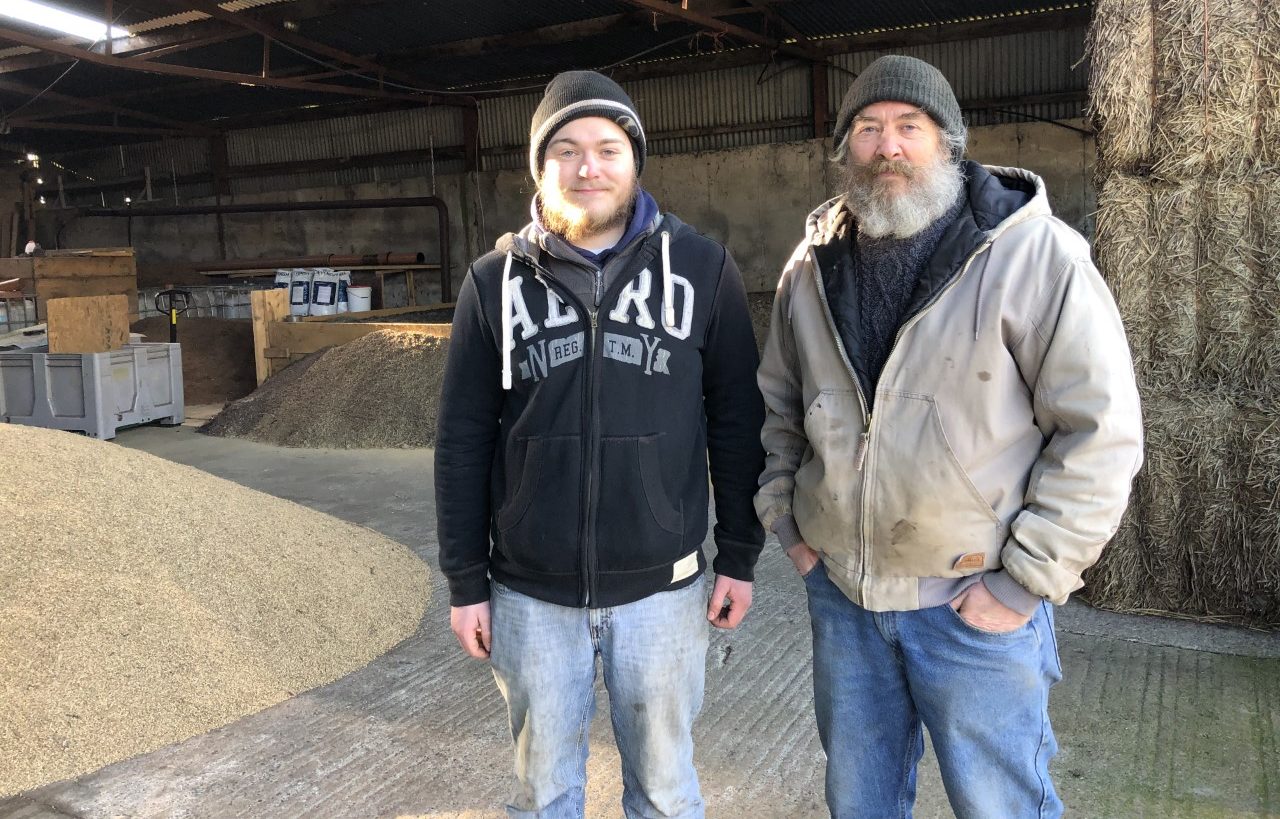 Peter spent a large part of his life in the US, where he was sheep farming and it was over on US soil where he came up with the idea of making use of by-products, such as wool, which have become a nuisance more than anything on sheep farms here in Ireland.

Speaking about his time in the US, Peter said: “I got involved in pellet making when I was living in the US. I was sheep farming over there and I noticed that the sheep were wasting quite a lot of [alfalfa] feed.

So through some research, I found that densifying the product would not only save on feed but it would be more energy-efficient to the animals.

“Over the years, I did more research and discovered that we could pelletise animal manure among a host of other biomass materials.

“We researched that even more and developed it and then decided to return home here to Ireland four years ago and I brought some of the technology and experience with me and I felt I could do something similar in Ireland.

“Because of the amount of biomass that is available in this country and the many uses that they have, we were able to pelletise them and bring them to different markets.

“We are at a stage now, because of global warming and pollution, that by densifying products we can do less damage to the environment as well as creating useful products, like fuel, fertiliser and animal bedding.” 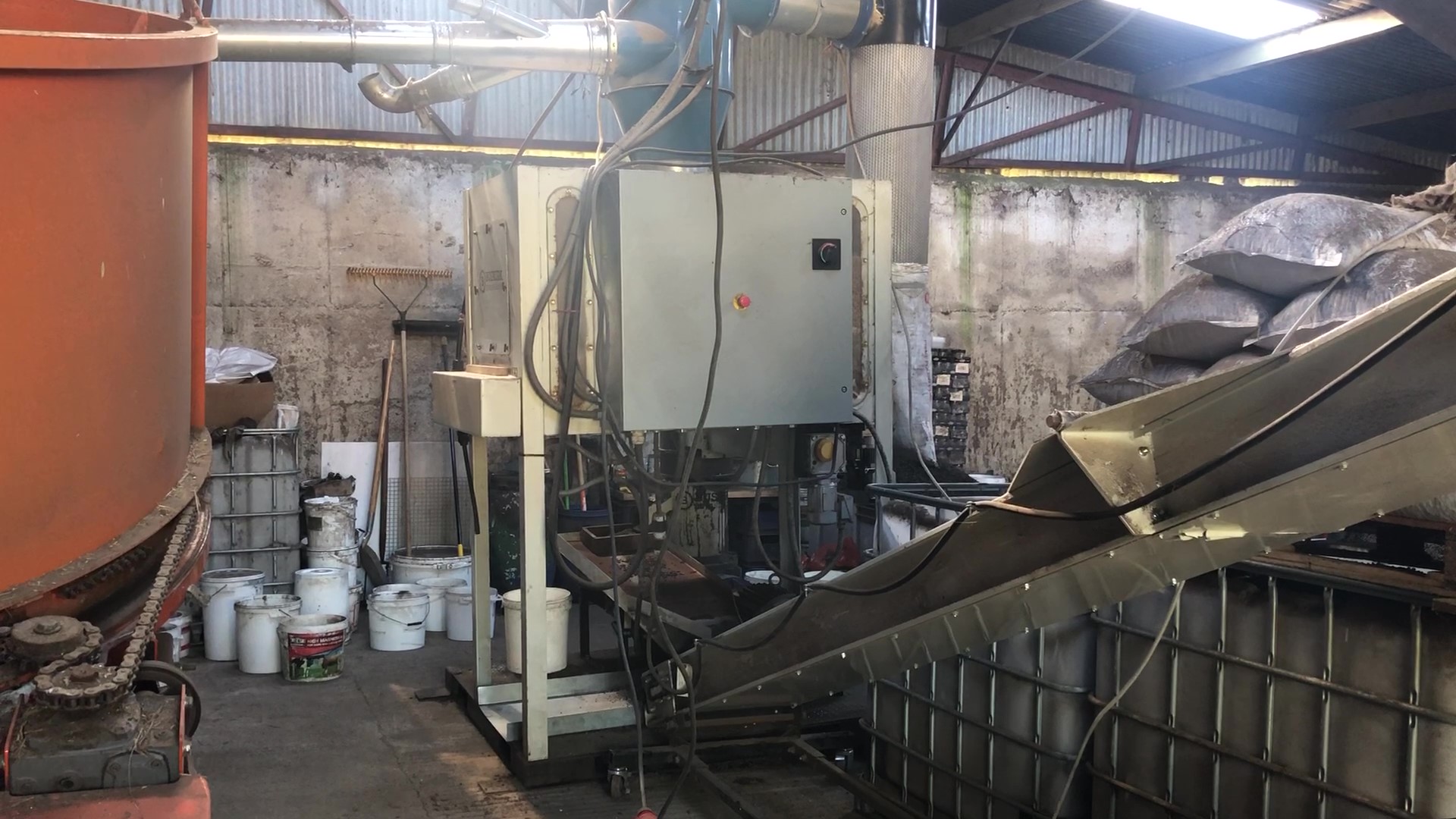 Talking about the process of turning biomass materials into pelletised products, Peter explained: “If we bring in wool let’s say, it can be clean, dirty or short wool, it doesn’t matter really.

We put it through the pellet mill and with heat and pressure we can turn it into a pellet. That pellet is then used as an organic fertiliser, as well as a range of other things.

“At the minute, the one problem we are facing is being able to chop the wool up. We don’t have a machine for that as of yet but we are looking at getting one.

“If we were to put in large amounts of wool into the pellet mill unchopped, then it would just get clogged up and cause problems.

“But with a machine that could chop the wool up, we would be able to process a huge amount of wool at any one time and turn it into something useful like fertiliser.” 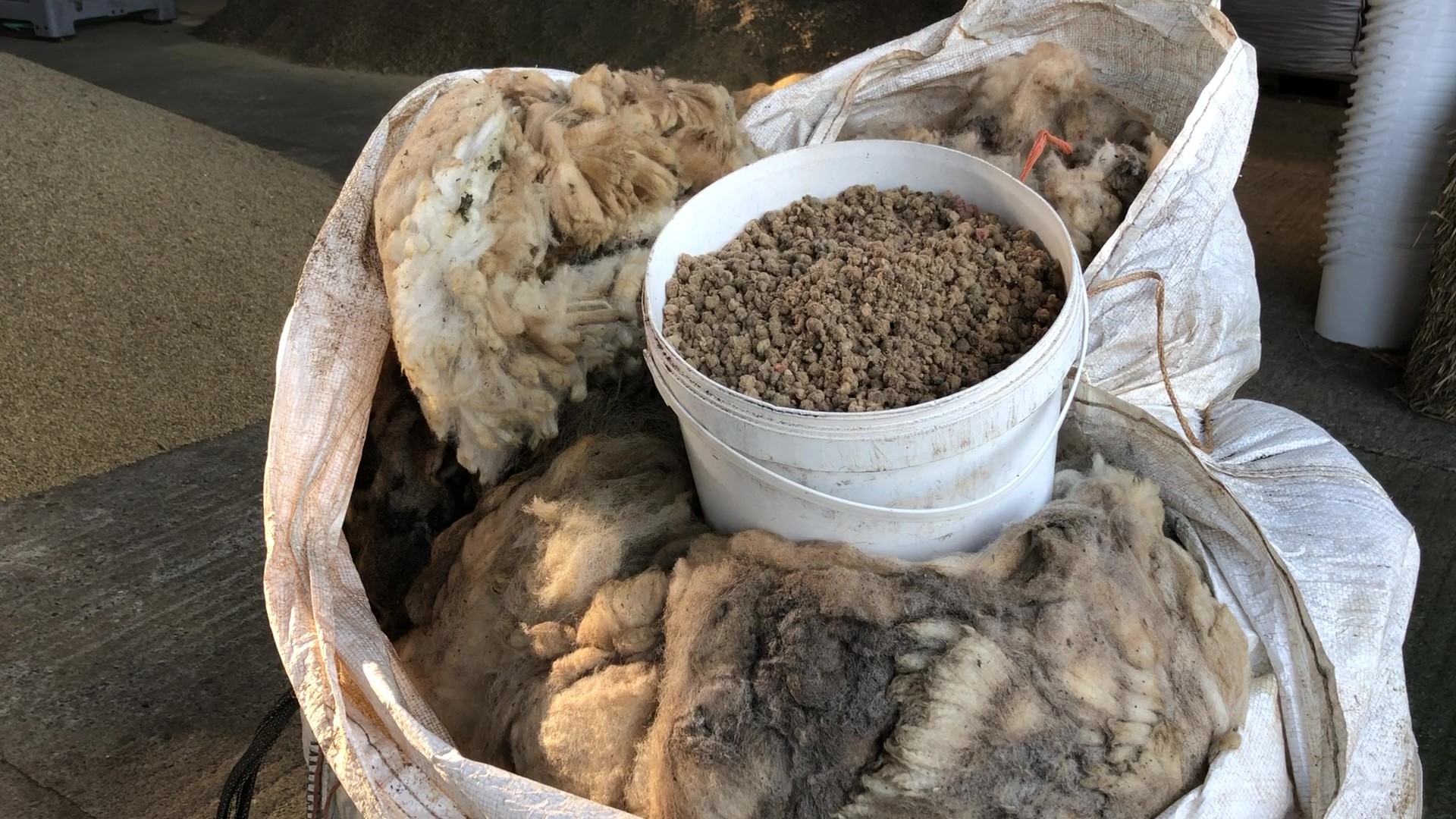 Speaking about the value of the wool once it is broken down and pelletised, Peter said: “If a farmer was to spread the organic manure made from the wool, you’re talking about a nitrogen (N) value of about 9%, the phosphorus (P) value would be about 1% and the potassium value would be roughly 2%.

“It also contains micronutrients and approximately 60% organic matter, so it will help to improve the soil aeration and water-holding capacity – depending on the time of year.

All round, it is just a good basic fertiliser. We can also pelletise cattle manure if it’s pre-processed on a farm, dried and separated, and turn it into organic fertiliser.

“It would be a slow-release fertiliser, which would be very beneficial for crops. We can take just about take any type of biomass and turn it into a pellet.” 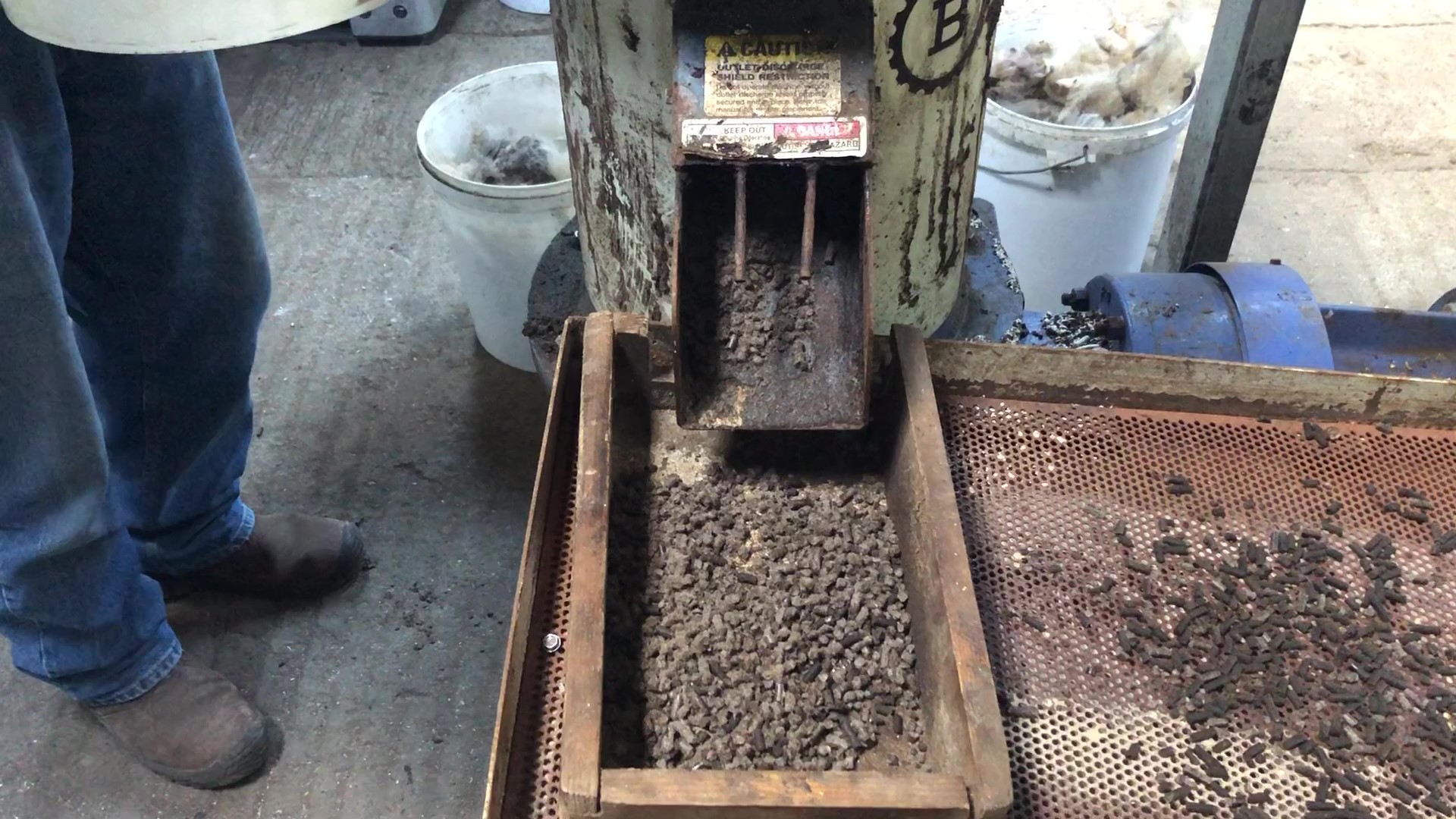 ‘We are too reliant on chemical fertilisers’

Peter believes that we are too reliant on chemical fertilisers and that making use of what we have and turning it into something useful, that’s good for the environment, such as organic fertiliser is the way forward.

Peter said: “I think what we are doing here is the way forward. We have excess biomass that’s an environmental hazard and we are continuing to add more chemicals to our soils that are not feeding the soil, it is just feeding a crop.

Our soil is dying because of this; micronutrients are dying and if we continue the way we are going, we will end up with unproductive soils.

“As well as that, if we continue to use chemicals, we will just increase the price of crops and it will just not be sustainable.”

Covid-19 has impacted Peter in getting what he is doing out there to people but he is hoping 2021 will be more successful.

He added: “Covid-19 has had a big impact in being able to access markets and it’s been challenging financially for people over the last year or so. We haven’t been able to get out and become known as much as we would have liked.

“Our products aren’t well known as of yet. One positive thing Covid-19 has brought about for us is that more people have been spending time at home and doing more gardening and growing their own vegetables.

A lot of people are looking to grow food organically and as healthy as possible and we have been trying to bring our products to people like that as well as people involved in organic farming.

“The good thing about we do is the products we make originate in Ireland and are made here on Irish soil, not imported like a lot of what we buy in shops / co-ops.

“We are just trying to assist in the sustainability of the Irish economy. The airmiles of some of the products we buy is absolutely crazy and if we are ever going to combat the challenge of climate change then we are going to have to make use of what we have and become less dependent on the importation of products.” 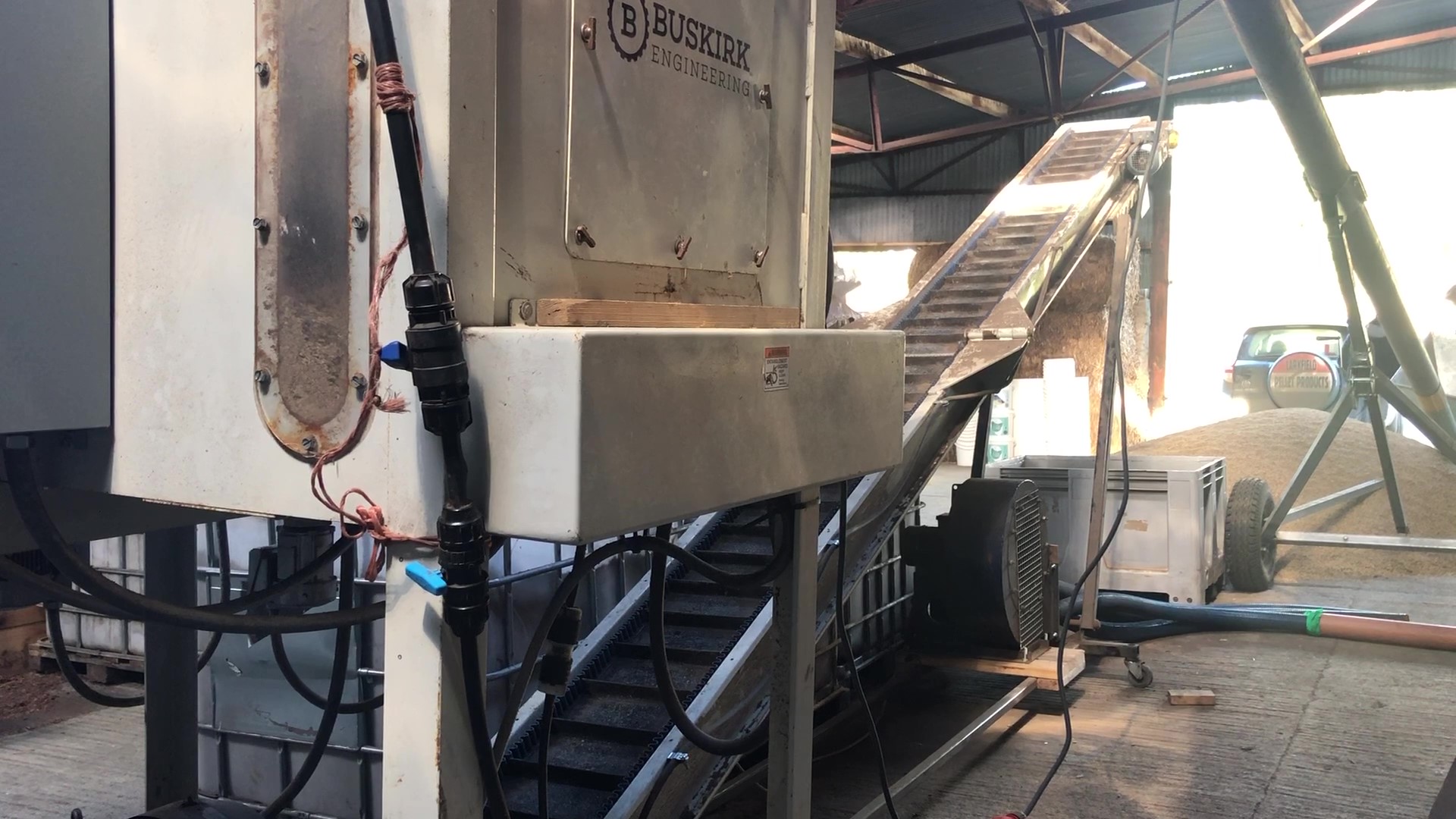 Getting the word out

Peter said that he has approached sheep farmers and has been posting on social media channels, such as Facebook, to get the word out about what he is trying to do with wool and pelletising it.

He has had responses from some farmers who would be interested in finding out more about making use of wool for organic fertiliser but with Covid-19, that task has become more difficult.

He is hoping to secure funding to be able to purchase more equipment that would help process the wool quicker and push the business on further, however, for now, he is hoping to just get the word out about what he and his son are trying to do.

If you would like to get in touch with Peter to find out more about what he is doing, he would be more than happy to hear from you. His contact details are: 087-403-6400 or check out their website – Larkfield Pellet Products.

Farmers' views: 'If you had to travel to get rid of the wool you wouldn't get the price of the diesel back'