Members of An Garda Siochana recently attended a road traffic collision involving a tractor and a number of other vehicles on the M6 motorway.

Gardai confirmed to AgriLand that three drivers – including two males and one female – were taken to hospital with minor injuries.

A report from local radio station Midlands 103 suggested that the tractor was travelling along the hard shoulder when a car struck the rear of the machine.

Advertisement
According to the Road Safety Authority of Ireland (RSA), a person may not drive a tractor on the motorway if it cannot travel at or maintain a speed of at least 50kph.

Meanwhile, a tractor was recently involved in a collision with an ambulance – which resulted in a stretch of road being closed for a short period of time.

The collision reportedly occurred on Thursday, October 4, at approximately 2:00pm.

According to local radio station KCLR FM, the ambulance was on its way to a call when the accident occurred on the road between Castlecomer and Athy in Co. Kilkenny.

The collision took place as the ambulance – which reportedly had its blue lights flashing – attempted to overtake the tractor, the local radio station reported.

It is understood that no one was injured as a result of the accident, but the road was closed for a short-time. 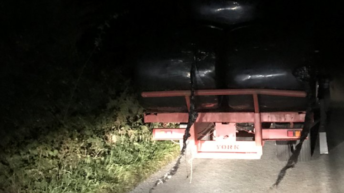