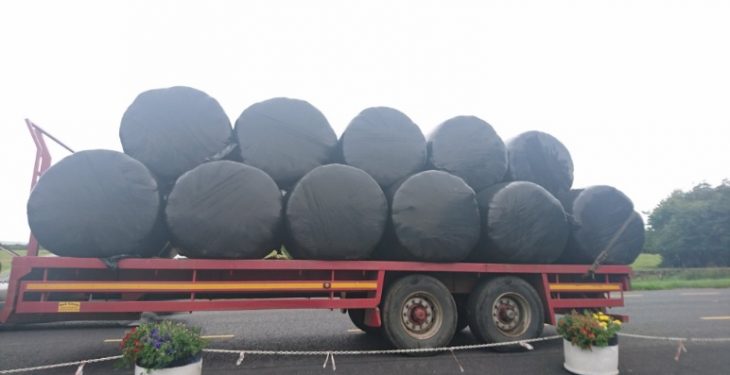 Gardai stopped a tractor and trailer that were transporting bales recently in Askeaton, Co. Limerick – for not having the top row of bales secured.

The tractor and trailer was stopped on the N21 and as the tweet below shows, there was only one strap on the trailer, which appears to have 17 bales.

Farmers, contractors and hauliers need to be compliant with the rules of the road when it comes to transporting bales.

The Road Safety Authority (RSA) has said that a load shall not be carried on a vehicle on a public road in such a manner that part of the load is liable to fall on the road.

Also Read: Here’s the official rules for transporting bales on the road

Gardai also pulled over a haulier in Tallaght recently which had an unsecure load due to a deflated tyre, according to the Garda Twitter account.

They reminded farmers to always safety check your vehicle at regular intervals while drawing fodder.

If a farmer or contractor is driving a tractor transporting bales on a trailer it is their responsibility to ensure that they are compliant with the national weight and dimension limits, the RSA has said.

It is also their responsibility to ensure that they never exceed the manufacturer’s specifications and authorisation plates on such trailers will indicate the ‘maximum loads not to be exceeded in Ireland’.

Every vehicle when in use in a public place shall be such, and so maintained and used, that no danger is likely to be caused to any person, it advises.

Furthermore, it confirmed that every load carried by a vehicle in a public place shall be of such a weight and size and so distributed, packed, adjusted and attached to the vehicle that, so far as can reasonably be foreseen, no danger is liable to be caused and that there is no interference with the stability of the vehicle.