The McAuley family farms outside Slane in Co. Meath. Louis McAuley is a no-till convert and took AgriLand on a tour of the home farm, which supplies grain to the family business – McAuley Feeds – last week.

Having studied at Harper Adams University Louis returned home to farm. He is an active member of BASE (Biology, Agriculture, Soil and Environment) Ireland and a keen promoter of no-till.

“We started [direct-drilling] in 2014; we dabbled in it and we’re about 70% no-till now. This is the fourth year where over half of the farm has been direct drilled.” 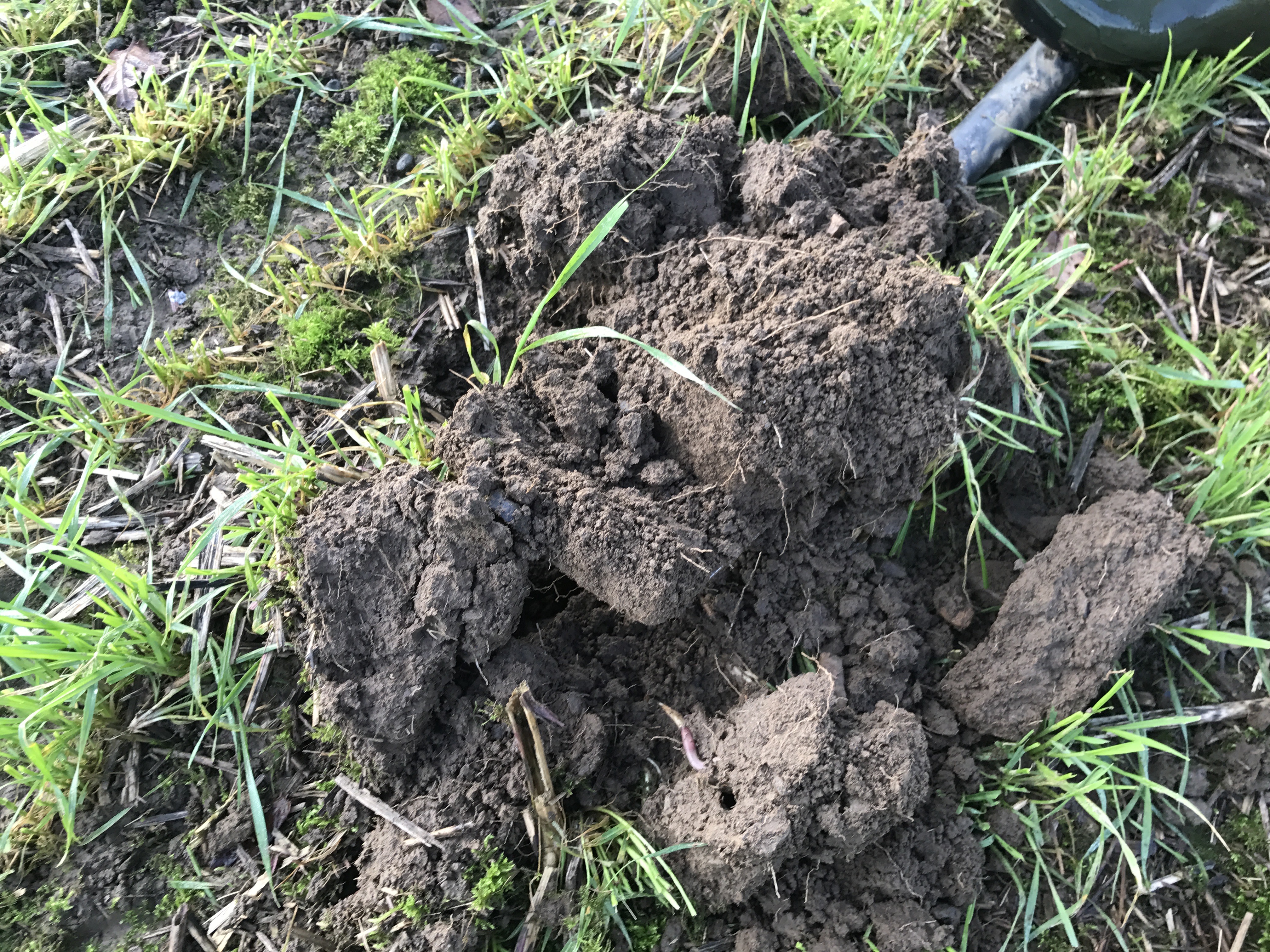 Digging down into the no-till ground is the true test of the soil and one thing that is clear is that no pan is visible. The soil is crumbly and the worms are active.

“You can dig down more than you would be ploughing,” Louis added.

This field clicked from day one. They don’t all work like this, but this field worked particularly well. There’s no pan. We don’t do any sub-soiling.

“It’s had a few cover crops. It had a cover crop before the beans and a short cover crop in between the two wheat crops. After rape this year we had volunteers; it was a carpet of rape.” 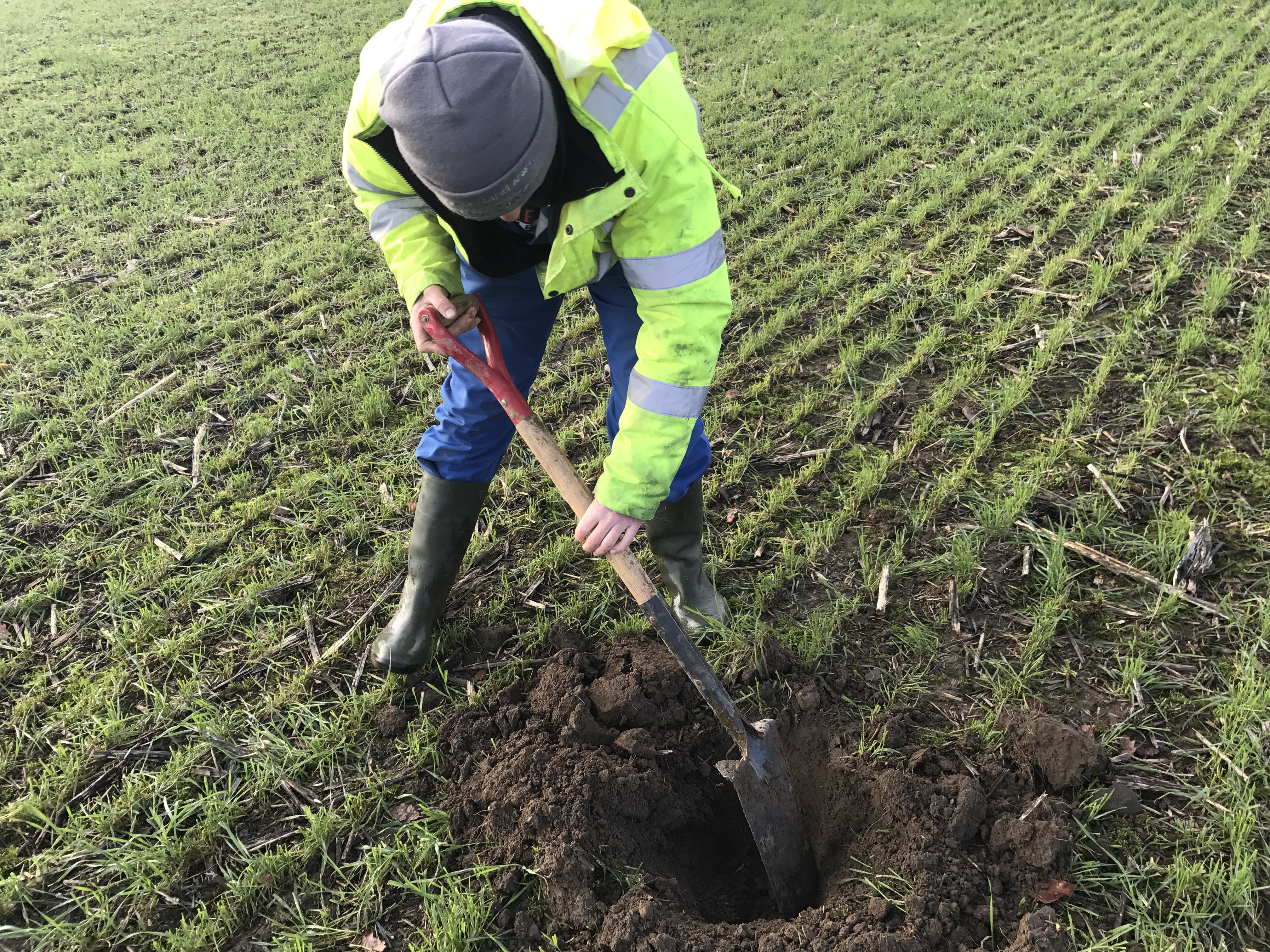 This week Louis McAuley posted a video of sheep grazing a forward crop of his winter wheat to his Twitter account. The cultural method of plant growth regulation went viral.

First stop on the tour was a field of winter wheat which had been grazed by sheep. The crop of Cellule was sown on September 15 and was very forward.

There were no signs of poaching on the field and the wheat had been grazed quite low. Management was key and the sheep farmer involved is extremely well set up for fencing. 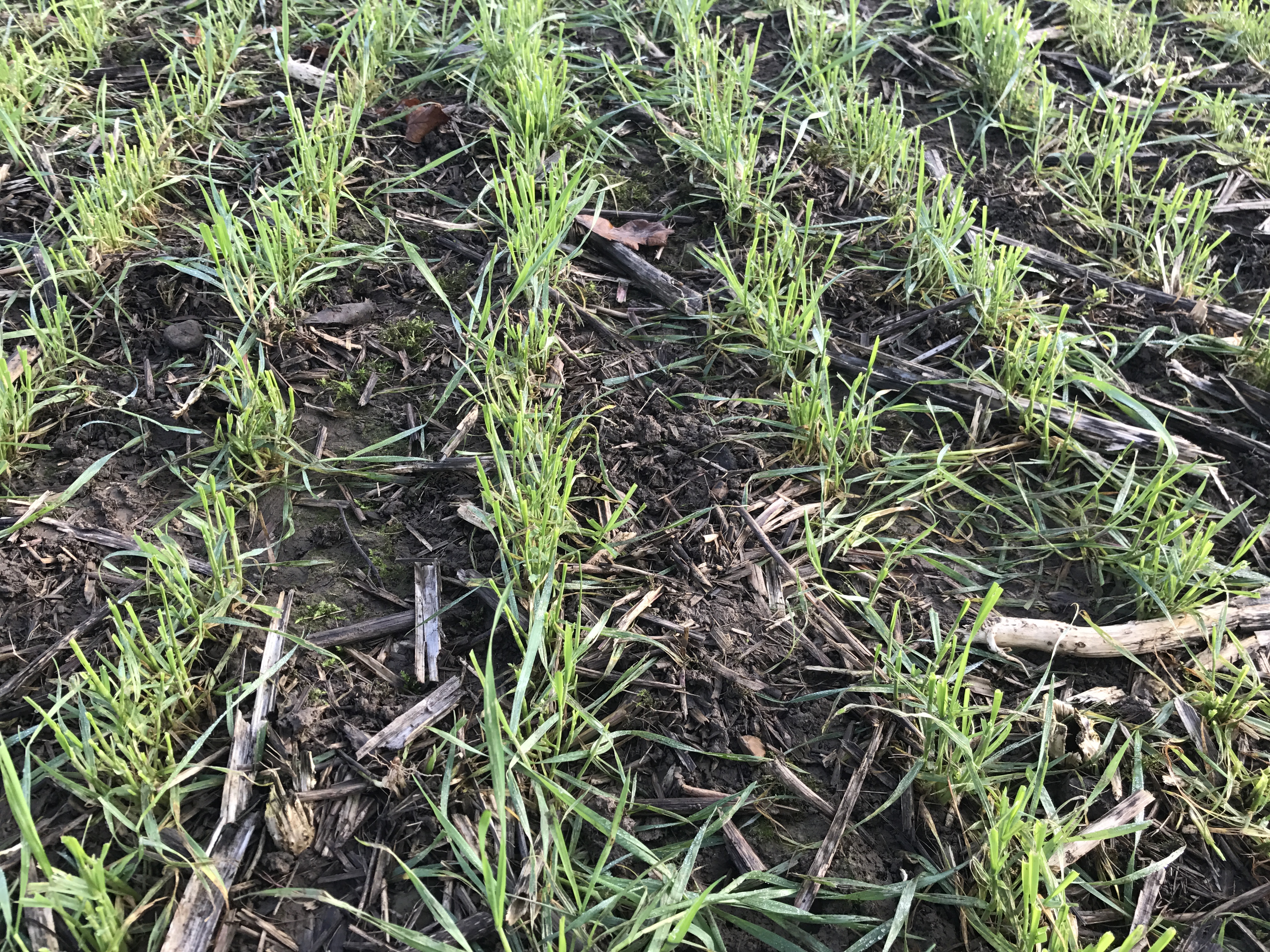 “There were 600 ewes in a group and they grazed the oats first. We didn’t want them to graze the winter wheat as tight as they did the cover crops.

There’s 33ac in this field and they were on it for four days, in four blocks.

“He has great wire and fencing. They’re not lingering back. I think that’s the key to it; that they don’t go back where they have grazed.”

The wheat was planted on September 15.

“We would sow early. That variety is Cellule and it just seems to have taken off.

“I’m not saying I’d do this every year, but the way it worked out this crop was too forward. We have other wheat sown at the same time – different varieties – and they’re about right.”

While grazing the winter wheat isn’t a regular occurrence, grazing cover crops like oats is, but these crops are never grazed to the butt to ensure that soil is still covered and plants can take up available nutrients once the livestock vacate.

“We like the idea of getting livestock back on the land in some way. We were a bit reluctant in the early years because we were trying to direct drill after it.”

The gallery below shows a cover crop of oats, which was grazed in December. The sheep which were grazing were moved to graze a crop of winter wheat and will return to this crop if weather conditions are not favourable for grazing the commercial crop. 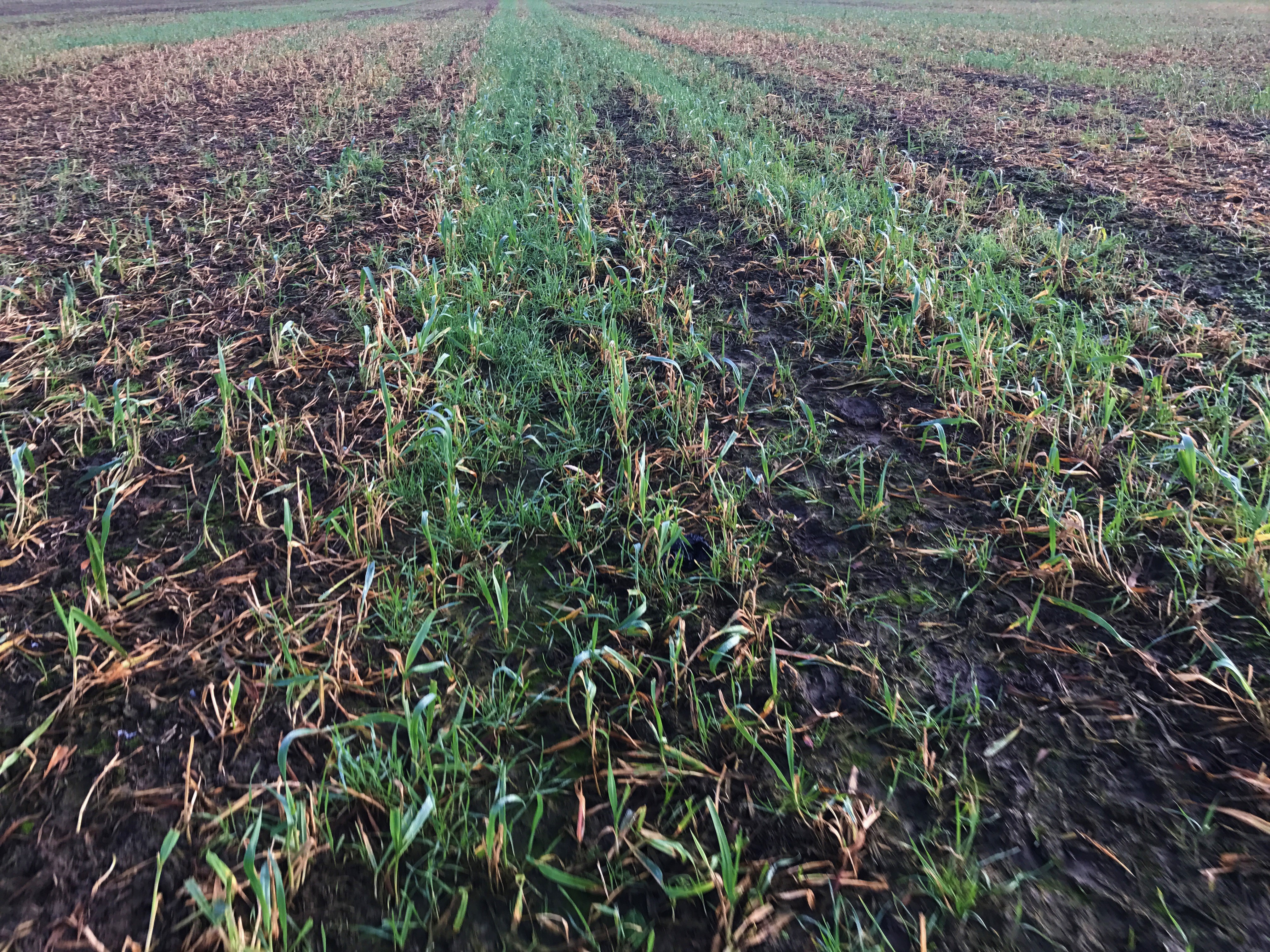 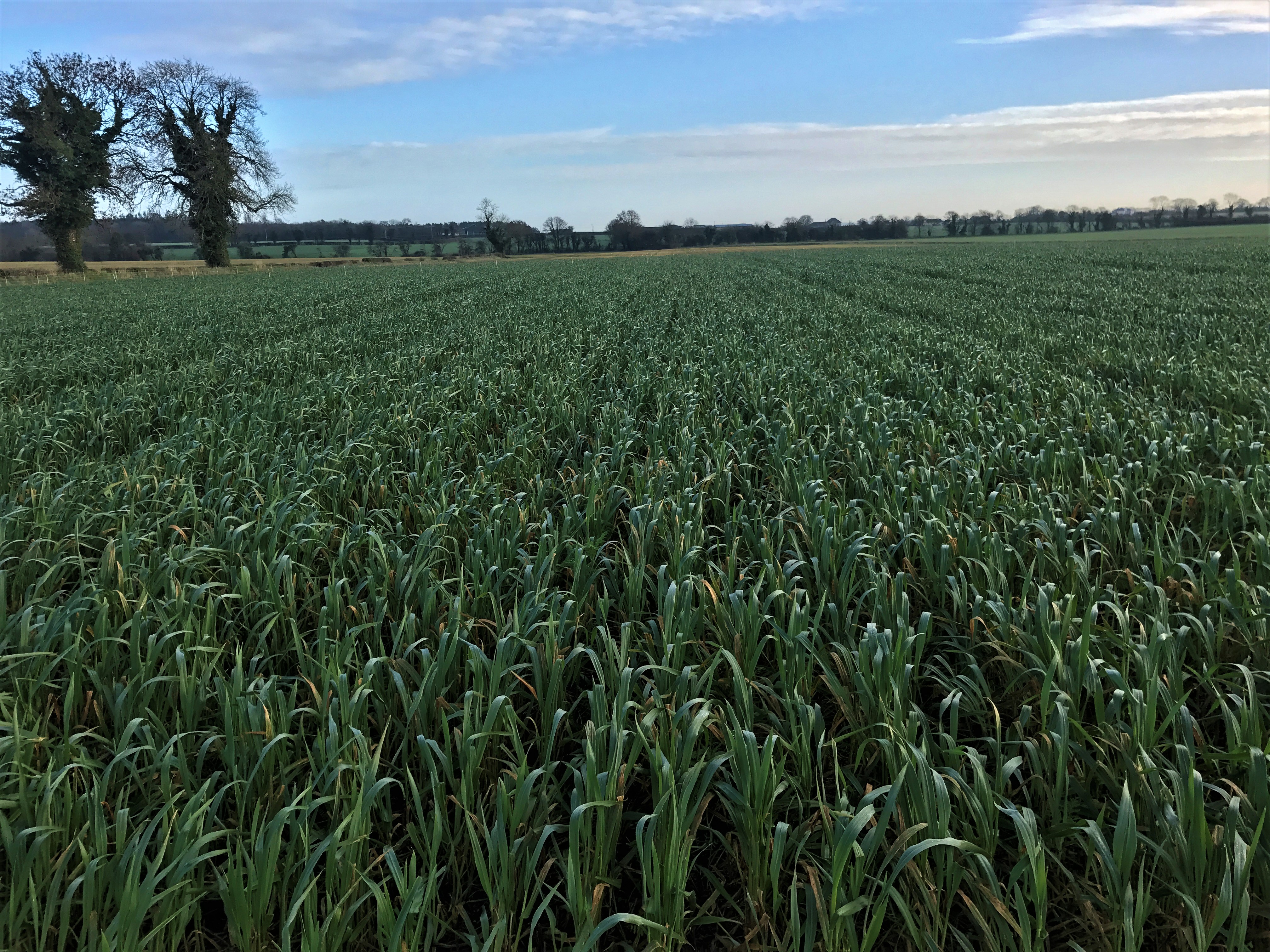 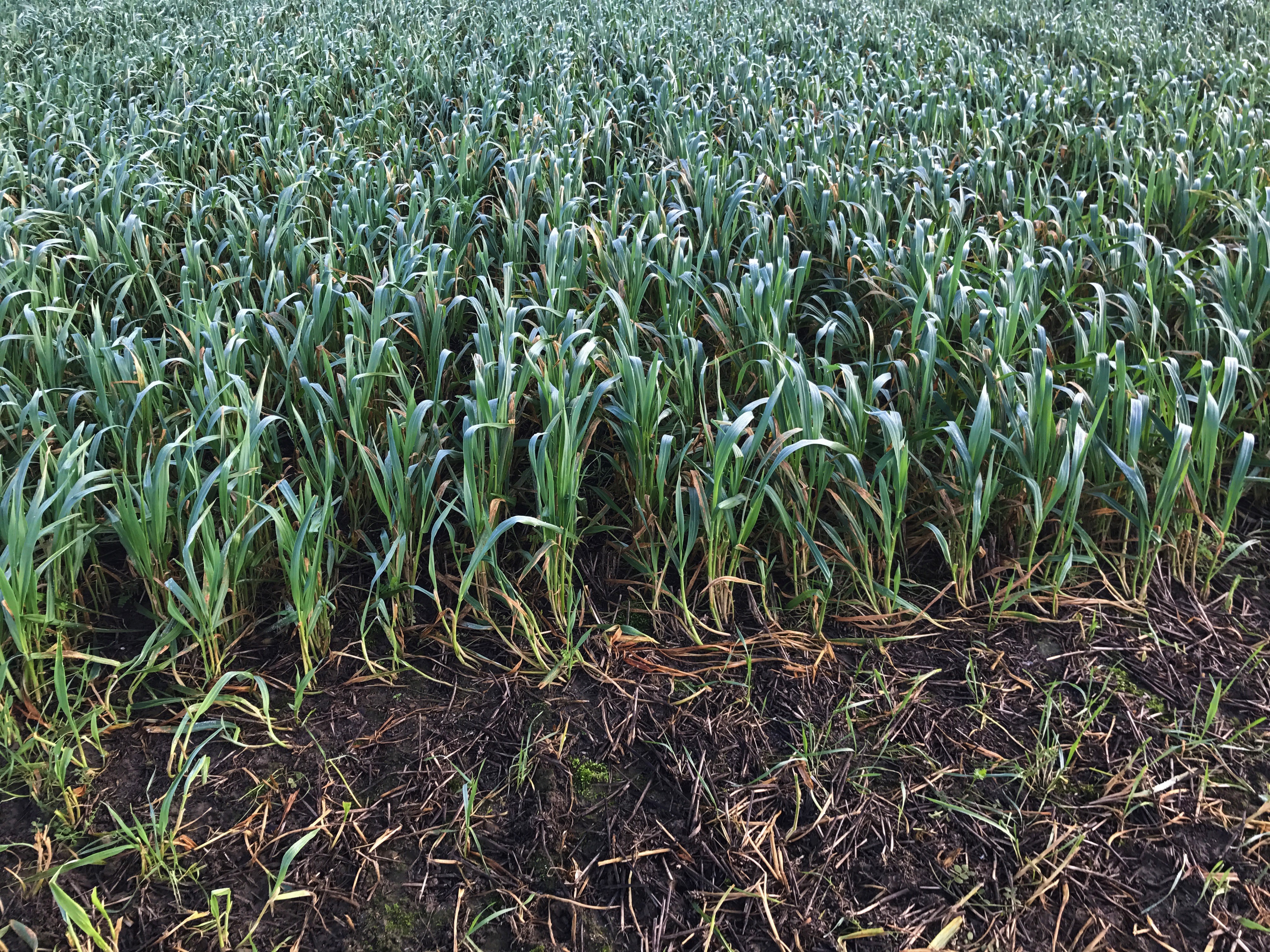 Louis explained that they made the change to no-till as they became frustrated with the soil. It was getting a bit harder to work. In order to improve soil structure and be kinder to the environment the McAuleys made the move.

Soil structure has improved massively in the past six years and it is very noticeable when walking across the field.

We like that you can see the soil improving. We had a good few wet years where the combine was sinking.

In one field, Louis explained that the same tramlines have been used since the last time the one-pass drill was in the field six years ago. Despite this a winter wheat crop is growing perfectly and shows no signs of suffering from compaction.

We’re not sinking and the crop is growing perfectly in the tramlines. 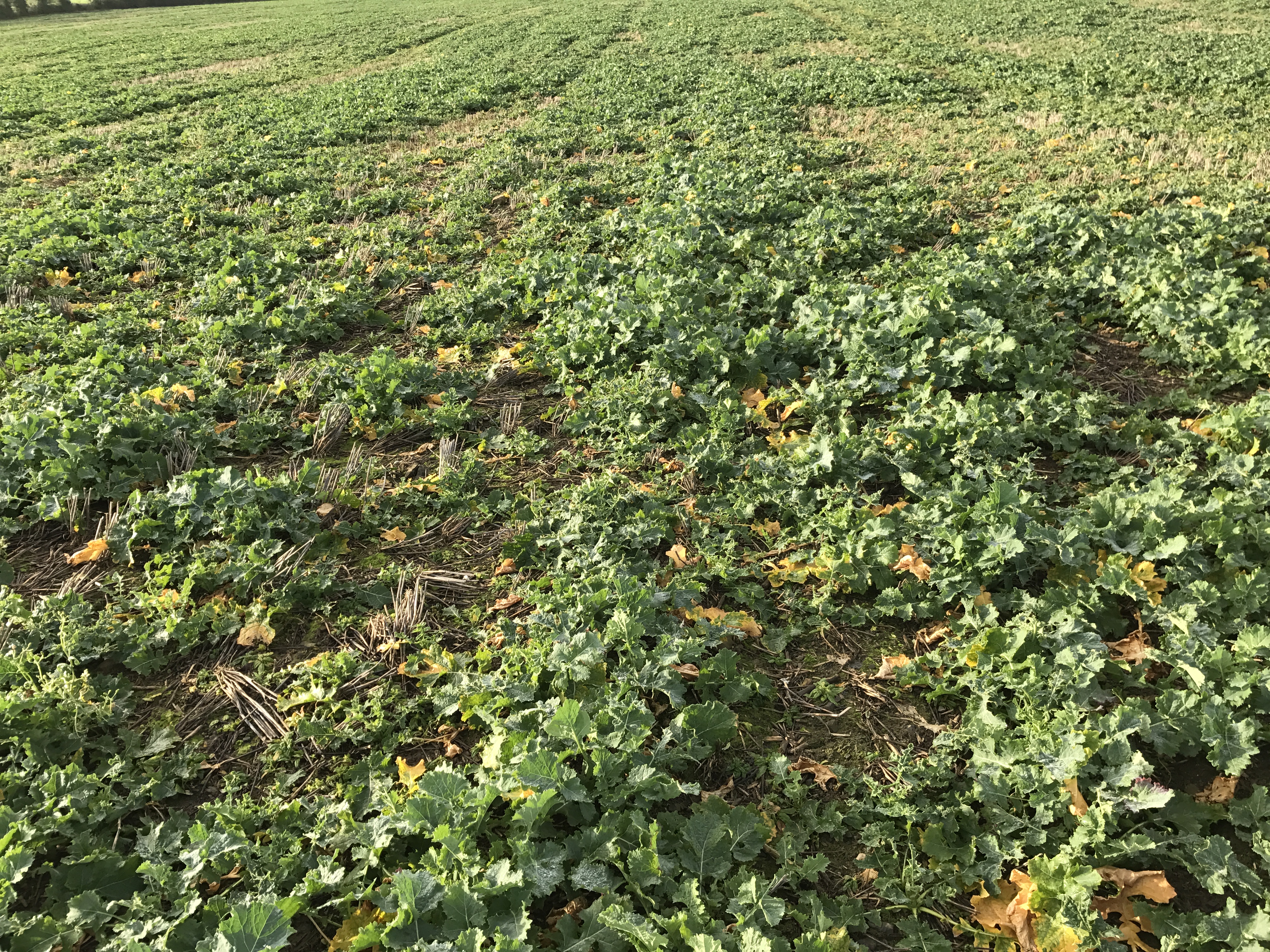 A crop of oilseed rape on McAuley’s Farm

Grass weeds are often a problem associated with reduced-tillage, but Louis explained that rotation has kept problem weeds at bay.

“Brome [sterile brome] is our trickiest grass weed. We have it anyway in the ploughed system and we have to be careful with it.

“It’s mostly strong where we’ve grown too much winter barley over the years, but with rotation it’s not really a problem. We were growing a lot of continuous cereals before and we’ve gone to a break crop, two cereals and a little bit of spring cropping, which we didn’t really do before. Brome is there but it’s not a major issue.” 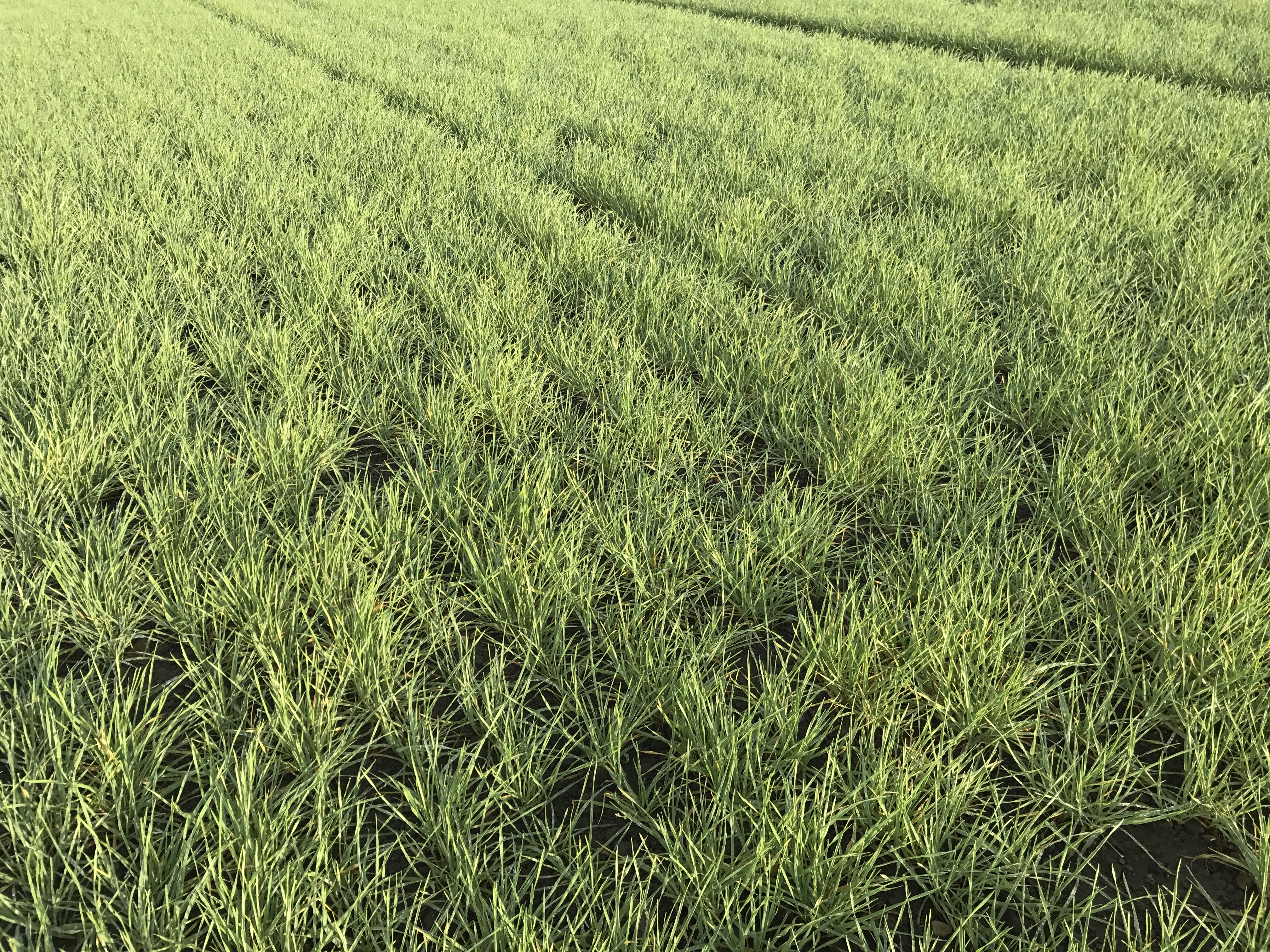 Ground was noticeably softer under this ploughed field of winter barley

Converting to a no-till system hasn’t been all plain sailing and involves a large amount of trial and error. Growers need to be prepared to take a yield hit while starting off in the system. However, other machinery costs are reduced.

“Last year, we suffered a little bit. Our crops weren’t perfect and that probably upset our confidence for this year.

“We were probably on course to put everything in with the direct-drill system this year and we probably would have got away with it, the way the weather turned out. If ever there was an ideal year to direct drill everything this was it.”

Not returning to the plough

While some land on McAuley’s farm is still in a plough-based system, there is no rotational ploughing on the farm.

“Generally speaking where we’ve moved to direct drilling we haven’t gone back. There are different land owners involved in all of what we do and it’s about keeping everybody happy, so if somebody doesn’t want to go direct drilling they don’t have to.” 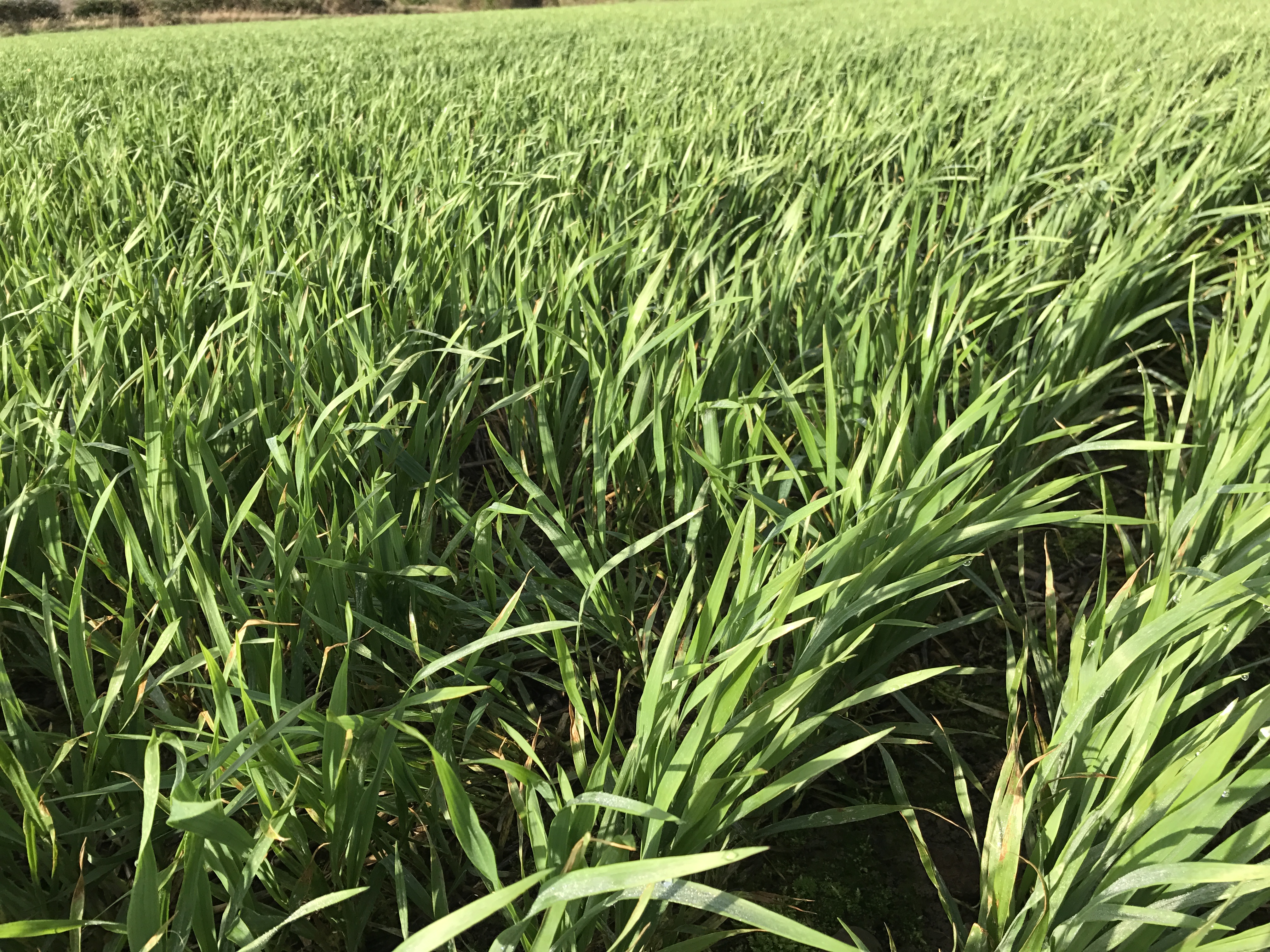 Wet weather is the biggest challenge the McAuleys face, like many tillage farms. However, the no-till system has provided a coping mechanism for wet weather.

“How you deal with a wet year and manage the risk is important. It’s an awful shame to go and plough just because one year is wet. We persisted with this field last year. We sowed it when it was very wet and the crop came up OK.

It would have been an awful pity to start again.

“Last season was the only real bump. There are benefits already, when we’re working in fields that weren’t ploughed we’re only doing a fraction of the damage at harvest. You have to be in the system a few years to get that benefit.”

“For me it’s easy to plough light land. Whereas we face the battle of it being too wet to plough; it’s ploughing up wet. If we leave it to dry out, it’s too hard to till.

We really see the benefits on our heavy land.

Louis added that there are also benefits to the system on lighter land.

“I think there are other benefits in moisture retention and putting a bit of body back into the lighter land.

“Our land isn’t terribly wet, but we will struggle in a wet year, no matter what system we have. In wet years it’s a battle.”

Cover crops on Louis’ farm are controlled using glyphosate when the commercial crop is being planted.

“We do a mixture of spraying before and after, but it is generally quite close to the drill.

“I think after sowing is the best timing because – in a big cover crop – when you drive through it and sow you let a bit of light into it and weeds that might have been covered up at the bottom come through.”

The threat to glyphosate in the EU is a worry for tillage farmers, particularly in a reduced tillage system. If the chemical is banned Louis explained that it could mean an end to this system of farming.

A big concern would be glyphosate going and what alternatives we can and can’t use.

“I would be very disappointed more than anything [if the chemical was banned]. We’ll get on and we’ll farm; but it would be disheartening, because of the benefits we think we’re delivering with this system.”