There can be ‘no unity in Irish agriculture’ at present – IFRG

A farm lobby group has hit back at comments made by Irish MEP Sean Kelly on the growing number of farm organisations “diluting” the voice of Irish farming at European level for lobbying, and has claimed that, as things stand, there can be “no unity” in Irish agriculture.

The Irish Family-Farm Rights Group (IFRG) has defended the emergence of new associations in the Irish agricultural sector, explaining that such changes have been needed to reflect a changing industry.

Donie Shine, national chair of the IFRG, acknowledged that there can be “several contradicting voices” from different organisations, but added that this is because the Irish farming community is “no longer the homogeneous grouping that it used to be in the past”.

Shine noted that diversification is now rare among Irish farms – a stark change from previous generations – with most farms now specialising in separate sectors – with each sector vying for having its concerns addressed.

The dependence of Irish farmers on European farm subsidies was highlighted as another factor, with the IFRG outlining its concern on the distribution of such payments.

Commenting on this, the chairman said: “Because of years of imbalanced and unfair distribution of these funds among Irish farmers by the Minister for Agriculture, an elite cohort, consisting of 20% of Irish farmers, now gets 80% of the fund carved up between them.”

Advertisement
He explained that this leaves 80% of farmers to have the remaining 20% of the fund divided up between them.

Shine also claimed that “unrepresentative” lobbying of established farm organisations has only served “the vested interests of an influential minority wishing to maintain their own disproportionately high EU farm fund handouts”, implying the need for other groups.

The chairman said: “The disparity in payments received by farmers has caused much hardship for the 80% who have had to endure the double whammy of having a comparatively small income subsidy while at the same time being price takers in markets where their produce is competing against the produce of the 20%.”

These, he said, can afford to sell their produce at “softer prices due to the comfort of having comparatively bigger income subsidies”.

Shine also claimed that there may be a case to be made against the Minister for Agriculture for the “unfair and excessive state aiding of one grouping of farmers at the expense of, and to the detriment of, another”.

He contended that this “unfair state aid” is conferring an “unfair competitive advantage on one group of farmers over the other”.

Concluding, Shine outlined that as long as the Minister for Agriculture is “unduly influenced by the unrepresentative voices” of established lobby groups, there can be no unity in Irish agriculture. 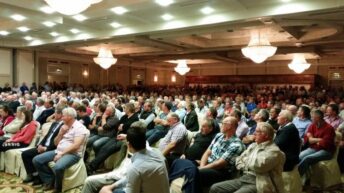