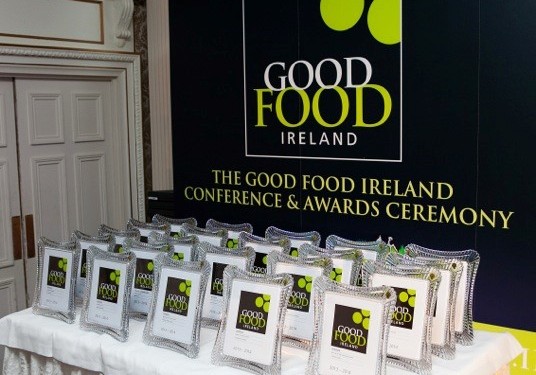 According to Fitzgibbon: “For the food producers, you should decide whether or not Origin Green is for you and for the restaurants and hoteliers here it should be of interest to you because it shows a national co-ordinated effort in the food area, which is helping Ireland to brand itself as a food source of choice.”

She noted: “Origin Green is a business-to-business stamp that can only be earned through robust procedure that shows everybody else in the value chain, that your company is actively behaving in a sustainable way.

“It is important because there is a clear and very definite momentum among re-sellers of food that they want to be identified as contributing themselves to more sustainable ways of providing food,” she added.

She stressed that the range of motivations involved saying: “With shareholders demanding it on the one hand, to saving the planet on the other, from branding and PR to saving money or indeed making money. The move, direction and increasing momentum in sustainability is becoming central to business.”

The Origin Green campaign is a strategic move by Bord Bia, which aims to position the Irish food and drink industry as a world leader in sustainability.

“And what we mean by sustainability is producing food for now in a way that doesn’t compromise our ability to produce it in the future.”

She asked the audience how can Ireland be central to than challenge and be a central solution to that challenge? She noted Ireland is a small country and we have very common systems of production, unlike many bigger countries out there who have complex and disparate systems of production. Food production is also strategically very important to Ireland’s recovery but also to sustaining rural life, she added.

“We are well known as a country who produces green clean and natural food the world over and so the step from there to embracing this new notion of sustainability is a small step and not a major leap in our imagination to do it.

“Sustainability however can mean different things to different people. Indeed anyone could claim that they are contributing to sustainability in some way or other. And so our logic and the logic of Origin Green is to set a standard so high that it is uniquely and intuitively recognised by resellers.

“In turn we have developed a third-party independent system around how companies can qualify to be regarded as worthy of carrying the business-to-business stamp of Origin Green,” she added.

Fitzgibbon stated: “Ireland believe it or not is the first country in the world to set a national industry standard for what sustainability means and it has been particularly heartening to us to witness the surge in the number of companies large and small who are getting involved and seeing real and tangible benefits from this programme. The level of inclusion of producers participating is important to be meaningful particularly on a world stage.

“In marketing and selling this concept from a small country, clearly we know that it is imperative for us to have a large number of diverse companies qualifying for Origin Green. Reflecting the integrity of that brand and what it means.”

To qualify companies have to be verified as being involved in a very specific and deliberate mix of projects that contribute to sustainability.

The Bord Bia marketing services director explained: “Companies submit a detailed plan about what and why and the extent of what they are doing in sustainability specific goals that are measureable, verifiable, auditable. It sounds like a lot of hassle in fact it’s not.

“Every single one of you is probably doing a lot of this anyway. Origin Green gives you the tools to support you to see it out in the first place and then to benefit from that,” she added.

“We truly believe there will come a time where not having Origin Green on your website will make a clear and loud statement and perhaps not a very positive one about your company. Because from a buyers perspective in large organisations there is a growing internal pressure to buy from producers who can prove they are actively working towards sustainability.”