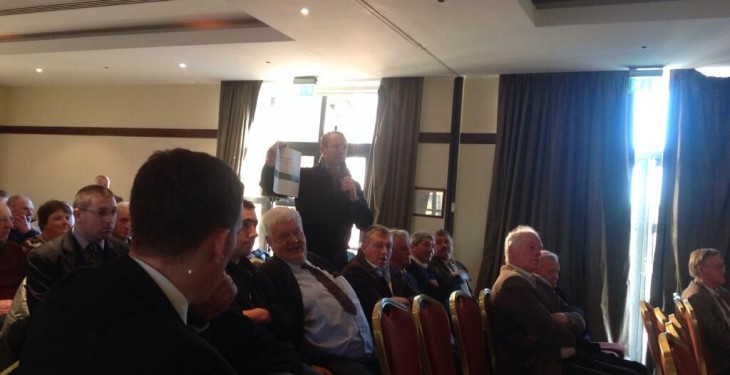 “If we are serious about producing renewable energy in Ireland in a serious way. We have to be able to move it around the country.”

This was the Minister of Agriculture Food and Marine Simon Coveney’s opinion when speaking at the Irish Creamery Milk Association (ICMSA) AGM in Limerick this afternoon.

“There are only two 400kb lines at the moment that is big lines carrying a lot of electricity and both of those leave Moneypoint and go to Dublin. And I’m not aware that along that route there has been any dramatic or massive damage to agriculture and farming.

“Having said that I do understand why people would be concerned this is big infrastructure. It’s very visual and people don’t want to look at it. But there has to be some compromise here. If people want this infrastructure underground there are significant consequences to that. One it’s significantly more expensive and two there are real technical problems with it. That we have teased though over many many hours.

“If we choose to do something that is more expensive in terms of building the infrastructure then the only way to pay for that is to charge people more for their electricity. If there was an easy technical solution to this without cost implications or for consumers in Ireland who need competitively priced energy .Well then we would be doing it and EirGrid would be doing it.”

Speaking on other topics to ICMSA members at the event, he stressed: “I am here to remind you that I and my department are fully committed to helping the sector realise this potential and to work in partnership with you as farmers in reaching our common goals.”

Addressing the Common Agricultural Polic (CAP) situation the minister noted “decisions made so far mean a continuing move towards greater market orientation that I believe suits Ireland, our agri-food sector and you as farmers. We can and will be competitive on the world stage when it comes to dairy if we continue to put the building blocks in place for sustainable growth after quotas are abolished. I am pleased also however that the CAP will continue to provide market support measures available as a safety net if the need arises.”

In terms of cautionary superlevy situation he encouraged producers to take immediate action: “Based on the latest monthly estimates received in my department, Ireland was 0.9 per cent over quota at end October. This compares to 2.8 per cent under quota this time last year and is up from 0.42 per cent over quota at end of last month. There is a strong possibility that Ireland will incur a superlevy fine unless milk producers take some corrective action in the remaining four months.

“While I do acknowledge the frustrations of farmers wishing to expand in response to both the favourable weather conditions and the strong milk prices it remains critically important that you continue to manage your enterprises within quota until the expiry of the milk quota regime on the 31 March 2015,” he added.