No holds barred for ICMSA president at AGM 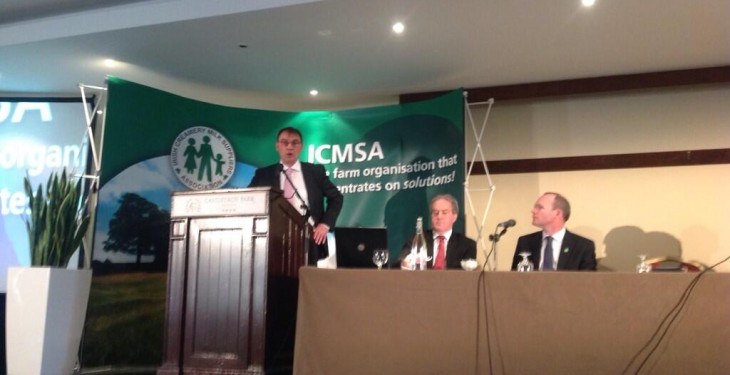 “Farmers are in a better place today than they were at the start of this year. At our last AGM, there was serious and genuine concern amongst farmers regarding their futures due to desperate weather conditions, poor product prices and unfortunately, we saw more than a few farmers leave the sector as a result. We all need to learn lessons and draw the correct conclusions about what happened and why less than eight months ago.”

This is according to ICMSA president John Comer who was speaking at its AGM in Limerick this afternoon where more than 350 delegates representing 18,000 farmers in the Munster and south-east Leinster region. Also present were Minister for Agriculture Simon Coveney and Bord Bia‘s Aidan Cotter.

In terms of the dire weather and fodder situation earlier this year, the president claimed the actions of the Government were “late and insufficient and we need to plan better for situations like this”.

“I’d like to compliment Teagasc in organising a conference shortly afterwards on the issue of weather and farming. This is a serious issue that cannot be ignored and dealt with on an ‘if it happens, it happens’ basis. It’s time to ‘build in’ seriously adverse weather events into our farming and agriculture policymaking.”

He noted the turnaround was dramatic in the past six months. “We are all well aware that it can turn again just as quickly. The EU Crisis Reserve Fund established under the recent Common Agricultural Policy (CAP) Reform must play a role in this regard in the event of another weather crisis.”

The ICMSA president also noted the improved milk prices over the past year.

“Over the last year, dairy farmers have thankfully seen an improved milk price and indeed we would contend that a further milk price increase was, and is, justified based on market returns. Given that it has not been forthcoming to date, I am sure all dairy farmers here will join me in calling for an end-of-year bonus to now be on the agenda of all milk processors that would properly reflect the market situation during the year.”

In terms of price volatility post quota, the president said this was going to be a “serious threat” to dairy farmers.

“With quota abolition looming in 2015 and given the price volatility we have experienced since 2009, it’s certain that price volatility is going to be a serious threat to dairy farming. We have seen the damage that poor prices and poor weather conditions did to individual farm families in 2012. The EU has responsibilities on this matter that it cannot ignore.”

He called on the minister not to ignore the issue and to put safeguards in place. “Ignoring it won’t make it go away and the damage it can do is usually fatal. We only have to look at the pig and poultry sectors in Ireland to see the outcome of unregulated markets and the decline in the numbers of farmers in these sectors. Unless we see appropriate policies to deal with volatility, our milk suppliers will remain extremely exposed and remember, our retailers, our processors will all survive by passing all the price squeeze back to the last link in the chain – and the one that does all the work, all the time and made all the investment – the farmer.”

He continued: “ICMSA certainly agrees that we can expand output at farm level. Whether that can be done profitably is the issue and the lack of any meaningful attempt at EU level to deal with extreme price volatility places a huge question mark after all the plans contained in Food Harvest.”

He said the ICMSA welcomes the move to establish a European Market Monitoring Centre but stressed that it can’t be just another ‘cop-out’.

“We have seen the shambles the multiple retailers in Ireland have made of the liquid milk market and this problem is being replicated right across Europe in the dairy and other sectors. Politicians across the EU, including our own, have talked tough on this for years but the reality is that the power of the multiples and larger food companies globally continues to grow and the position of the actual food producer continues to be undermined,” he claimed.

The ICMSA president also took on the issue for input costs. “In the five years between 2008 and 2012, farm inputs costs have increased by 41 per cent while farm overhead costs have increased by 18 per cent,” he said.  “These increases are simply not sustainable and must be addressed by policymakers. Veterinary medicine costs are a case in point, with an increase of more than 46 per cent.”

In terms of the recent TLT receivership, the ICMSA president said it highlights the vulnerability of farmers.

“One such event can wipe out a family farm and the existing legislation is simply inadequate. As the supplier of the primary raw material, it is ICMSA policy that farmers should be made preferential creditors under the law and thus afforded a higher level of protection than is currently available. Successive government have failed to act on this matter to the severe cost of many farmers.”

With regards to the Common Agricultural Policy Reform (CAP) 2014-2020, he called on the Agriculture Minister to ensure cuts to active farmers are kept to an absolute minimum.

“ICMSA is clearly stating that active farmers must be protected and I am deeply concerned at this stage that we are going to see a massive transfer of funding away from active farmers to people who simply own land. This cannot be allowed to happen but I fear greatly this will be the net result.”

He continued: “ICMSA does not support a coupled payment for the suckler herd funded from the single farm payment budget. Given the extent of possible other reductions, our members cannot afford another percentage cut, whether it be three, four or eight percent to fund a suckler cow payment. Indeed, Teagasc research has shown that only 20 per cent of suckler farmers would actually gain from a coupled payment.So we’re left with the following question to which ICMSA would like an answer – is it possible that a farmer with an average payment is going to  suffer another deduction to fund a coupled payment for a farmer whose single farm payment is very possibly a multiple of the national average? Does this make any sense on any level to anybody?”

He also stressed that Pillar II 50:50 co-funding was “an absolute must”. “Farm schemes have been ravaged in recent years with serious cuts in the disadvantaged areas scheme, REPS scheme and the abolition of schemes such as the early retirement scheme. The Pillar II schemes are of major importance to all farmers and farmers are extremely disappointed that there is no agri-environment scheme available in 2014 – probably for the first time since 1994.”

On wider rural development issues, the ICMSA president said and its 18,000 members are watching with mounting anger over the ongoing decline of rural towns and villages and the failure of state agencies to develop these towns or maintain existing industries.

“Our rural public services from garda stations to hospitals continue to decline and it is about time that our elected public representatives remembered that Ireland is more than Dublin and the larger cities. We all can’t live in Dublin and if Dublin wants to have food to eat they might make it a little bit easier for those of us living outside it. We don’t want anything extra but we don’t see why we should be told to make do with less.”

He referred to the current €3.2bn Eirgrid pylon upgrade.

“A perfect illustration of this patronising attitude is the current Eirgrid pylon controversy,” he claimed. “What infuriates people most is the very real sense that as far as Eirgrid – and to a lesser extent, the State – is concerned, that the matter has been settled and that us poor culchies are just going to have to deal with a decision already made. That’s what really angers people; the clear message that all the blather about ‘consultation’ is just that: blather. That what we are seeing now is a pretence to cover up the fact that it’s already been decided by a handy little group of executives, none of whom can see any pylons from their mansions in Foxrock or Killiney.”

The AGM meeting in still under way where Agriculture Minister Simon Coveney and Bord Bia’s Aidan Cotter are expected to address the delegates, along with a Q&A sessions.