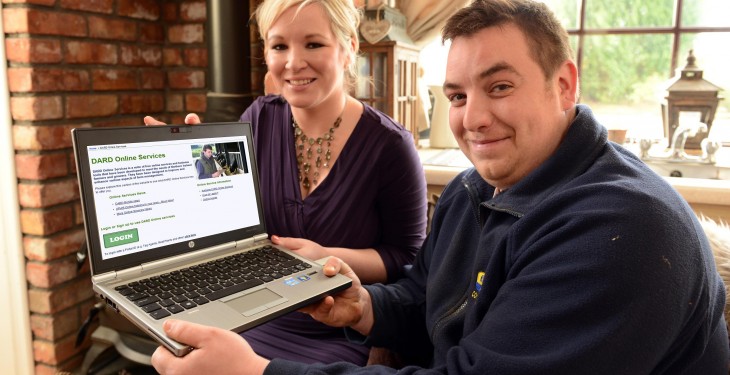 The View from Northern Ireland: Agriculture Minister Michelle O’Neill has announced that more farmers than in 2012 will receive single farm payments in December 2013.

The minister said that the first payments should reach farmer accounts by 6 December and added: “I aim to finalise around 85 per cent of the 37,600 claims submitted to the 2013 scheme in December, which amounts to £213m sterling in payments made. In real terms this means that more than 700 additional farmers will be paid in December than last year – making a real difference to cash flows. I expect a total of 95 per cent of payments to be made by the end of February 2014.”

Referring to the work carried out to upgrade the arrangements for finalising inspected cases the minister said: “I am pleased to say that the improvement measures I introduced this year will result in more inspected cases being paid in the first three months of the payment window than was possible in the first five months last year. The objective is to finalise the majority of inspections by the end of February 2014 and all inspections, other than those that are held up by other issues, by the end of April 2014.”

Highlighting the department’s ambitions for the future, the Minister explained: “I want to ensure that far more farmers receive their single farm payment in December, including inspection cases, and farmers can help us achieve that by submitting their claims online. In order to stimulate more farmers and agents to go online, I will commit to making 90 per cent of payments in December 2014, if the proportion of claims submitted online goes up to 40 per cent in 2014. I would strongly encourage farmers to go online themselves or ask their agent or form filler to go online. It’s a good way to avoid mistakes compared with paper and crucially it will speed up payments to farmers overall.”

This week the minister visited the Bellaghy farm of Jonathan McAdams, who is a strong supporter of completing the forms online. He said: “I have been completing my single application online for three years. It lets me know if I’ve made a mistake or if I’m claiming more than I should. On top of that I don’t have to queue up at the local Department of Agriculture and Rural Development  (DARD) office to get a paper receipt. When I do my application online, I get an email almost straight away to tell me that DARD’s got it and also get a summary of my claims. It really is the best way to complete the Single Application and if using the online service can help DARD pay farmers sooner, then it’s the way to do it.”

In conclusion Minister O’Neill said: “This is good news for farmers at the end of a tough 2013. If we get the support of farmers for increased online claims next year, we can do much better again. I want to work closely with the farmers unions in the run-up to May 2014 to see if we can together make it happen.”

Meanwhile the Ulster Farmers’ Union (UFU) has welcomed but said it would like to have seen the department “aim higher”, especially given the very tough year farmers have had.

In a statement, UFU President Harry Sinclair said: “Last year DARD paid 83 per cent of SFP in December and this year they have said that they intend to improve on this by two per cent. While we would have liked to have seen them aim higher in 2013, it is still welcome news. Undeniably cash flow has been a major issue for many farmers this year so any improvement is better than none but it is now up to DARD to ensure they deliver.”