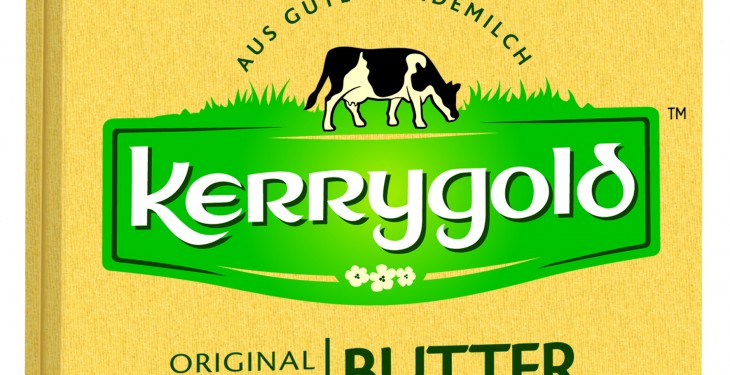 The Irish Dairy Board is today celebrating 40 years in the German market, where the business is on track to report record sales in 2013. Kerrygold is Germany’s No 1 butter brand, with a 17 per cent market share and more than a 50 per cent branded share.

It sells close to 200 million packs of butter in some 23,000 outlets each year – enough butter to stretch from Dublin to Berlin, 14 times.  The iconic Irish brand was first launched in just a handful of stores in Germany in 1973 – the year in which Ireland joined Europe’s Common Market.

The IDB marked the anniversary by announcing a €10.5m investment in new state-of-the-art facilities to support continued growth in Germany.  This investment is a key part in the IDB’s strategy to grow the market for Irish dairy produce in the run up to the abolition of milk quotas in 2015.  The capital expenditure will fund extended storage, packing, state-of-the-art production facilities and new product development.   The IDB employs 110 staff in Germany.

The IDB business model in Germany has been based on developing a solid understanding of the German consumer.  Investment in research into consumer insights, along with a willingness to invest heavily in new product development and supported by extensive marketing, has been a powerful mix for the Group.

IDB has learned that above all else, in terms of food, Germans value quality of ingredients and quality of product.  Today, many German consumers refer to Ireland as the ‘Garden of Europe’ and have a strong emotional connection with the Kerrygold brand which is underpinned by its Irish origin and personality.

Product innovation being critical to growth, IDB Deutschland continues to bring new products to market, responding to changing consumer demand and tastes.  Recent new product launches include butter with sea salt crystals packaged in an upside down tub, Butterkäse, a mild creamy breakfast cheese developed to appeal to the German palate and Kerrygold Bratcreme, a liquid butter and rapeseed oil blend used for cooking.  These product launches marries with the IDB business strategy of building new routes to market through new product development.  In 2012 alone, IDB launched 50 new products on the global market.

Kevin Lane, CEO of the IDB explained the importance of the German market to the IDB. “Germany has been the most successful export market for the IDB.  Turnover in Germany in 2013 will surpass €280m, which will be a record performance for the business.  The €10.5m investment we are announcing today is strategically very important for the IDB.

“Our base here allows us to further expand our business in Germany and throughout this region.  This expansion is good news for our consumers, for IDB Deutschland, for our employees and for Irish dairy farmers, who will have a bigger market for their quality milk.  In the run up to 2015 and beyond, core established markets such as Germany, as well as new emerging markets, will be very important for the Irish dairy industry.”

To coincide with the anniversary, the next video in the Meadow Milk campaign was released.

‘A Day in the Life’ features Cavan farmer David Cassidy and his family. David won the 2012 National Dairy Council and Kerrygold Quality Milk Awards. He milks 80 dairy cows and is a third generation farmer.In the video he describes his relationship with the land and how he started farming with his wife and family.

The Meadow Milk campaign showcases the unique attributes of Ireland’s grass-based farming methods to consumers across international markets.  The series comprises four videos, each focused on a different theme: the weather and climate; the farmers behind our brand and their craft; the unique landscape of our country and animal welfare.