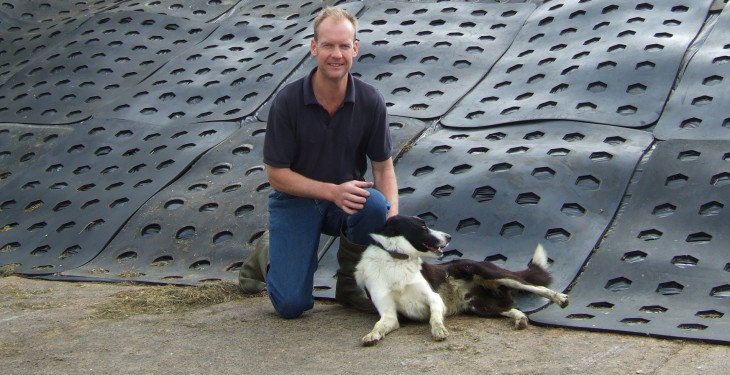 The View from Northern Ireland: Robert Bryson runs a herd of 165 Holstein Friesians on 105 hectares near Loughbrickland, Co Down in Northern Ireland.  The herd is autumn/winter calving and currently sells 7,600 litres of milk per cow per year from a concentrate input of just 1.8 tonnes.

Even on a dry farm, such as Robert’s, summer 2012 was difficult with some ground damaged due to cows grazing when conditions were far from ideal.  As winter 2012/13 drew to an end, silage stocks were very tight with all reserves used.

Cows were turned out on 27 February 2013 during the day and then out full time on 26 April. Weather conditions and grass growth were challenging during May and Robert introduced soya hulls to help meet the fodder shortfall, fed after milking as a ‘stand alone’ feed.

The farm aims to maximise the amount of grass in the cows diet and make as much high-quality silage as possible. Fertilizer for silage ground was applied early and 46 hectares of first cut were harvested in good conditions on 22 May.  This first cut was later than normal and yield was slightly less than what would have been expected in a normal year.  Ground earmarked for second cut received 80 units of nitrogen and another application of slurry and ensiled early July.

A third cut of 30 hectares received 60 units of nitrogen and slurry and was cut in ideal conditions on 28 August.  This ground has since received 40 units of nitrogen to encourage further growth for autumn grazing.  To help ensure sufficient silage was made an additional 13.8 hectares of 2nd cut silage from a neighbouring farm was ensiled along with his own 3rdcut.

Now that all silage has been made Robert is confident that there is enough fodder for a ‘normal’ winter and as silage quality is good will allow good cow performance.

Throughout the season grazing ground has received 40 units of nitrogen per grazing.  During the very dry weather the farm suffered from moisture deficit and grass supply came under pressure.  Today, however, grass covers are good as is quality and the herd is averaging 25 litres/day with 14 litres per cow being taken off grass.  Rainfall on the farm was 63mm in July and 18mm in August.

Some of the damage caused last year has necessitated remedial action and so far three fields have been drained.  A further 12 hectares have been burnt off for reseeding now.

The whole farm has been soil sampled this past 12 months and to date 170 tonnes of lime have been applied as per soil analysis recommendations.  Quality grass and silage is the foundation of profitable milk production on the Bryson Farm and explains the day to day decisions taken by Robert.

All farmers need to complete a fodder budget now and take the necessary steps in planning winter feeding.

Pictured: Robert Bryson is confident that he has enough silage for a ‘normal’ winter