The latest supermarket share figures from Kantar Worldpanel in Ireland, published this week for the 12 weeks ending 18 August, show a €30m uplift in consumer spend as a result of the heatwave compared with the same period the previous year.

Kantar Worldpanel commercial director David Berry explained: “The good weather has clearly had a positive effect on the grocery market, with consumers spending more on traditional barbecue and picnic foods.  Shoppers have spent an extra €2m on sausages, boosting sales by 12 per cent.

“However, sales of frozen burgers continue to decline despite the BBQ weather, with shoppers increasingly likely to buy chilled burgers instead. Cooked meats, bagged salads and bread rolls have all seen double digit sales growth, helping overall grocery sales grow by 1.5 per cent. Ice creams and cider have helped keep consumers refreshed with sales of both growing by more than 30 per cent.

“Among the retailers, Aldi and Lidl both continue to post impressive growth of 26.6 per cent and 14.8 per cent respectively, capturing a combined record market share of 15.1 per cent. SuperValu has also performed strongly over the summer period, attracting new shoppers through the door and seeing them spend 60 cent more on each trip.  This has helped boost its share from 19.5 per cent last year to 19.8 per cent now with sales growth of 3.1 per cent.”

Tesco has seen a drop in sales compared with a strong performance last year, with fewer customers spending less in store.

Berry continued: “Interestingly, there has been no negative effect for Superquinn following the recent announcement that the stores will be renamed as SuperValu, with sales and market share remaining in line with last year.”

The coming weeks will be important for each of the retailers as they look to win new customers during the important back to school period and retain them as the winter season approaches, he added. 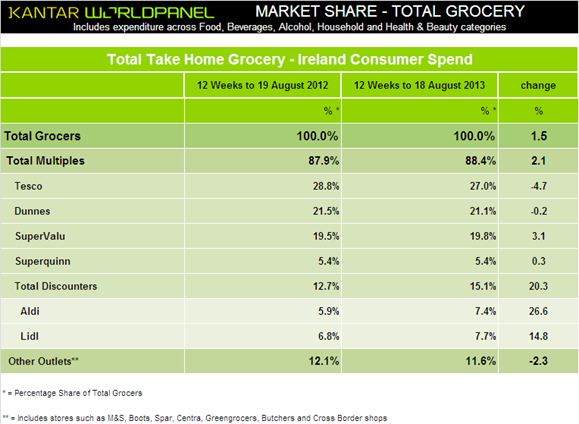